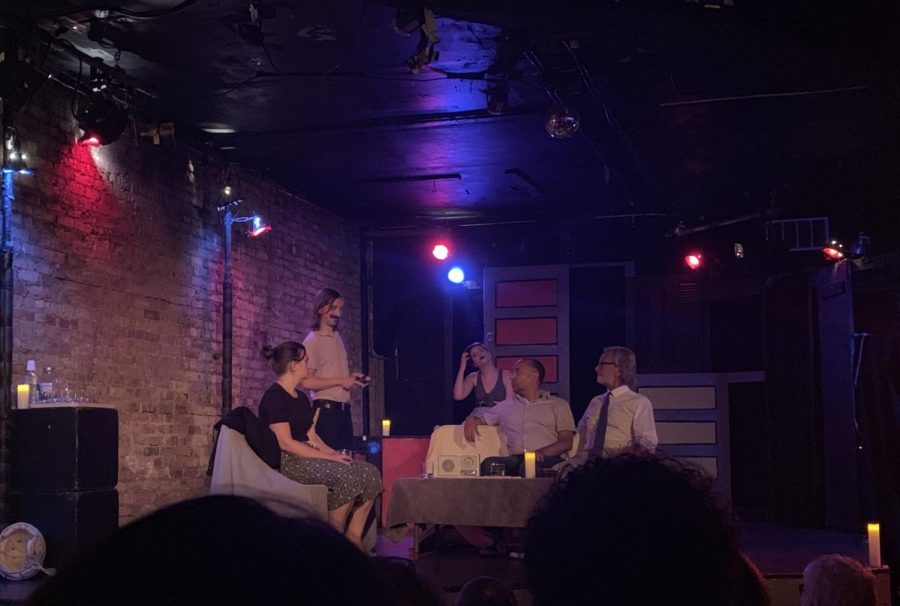 The show, which took Radke four months to write and six actors—including Dave Satterwhite, another DePaul alumnus—to produce, follows six characters stuck in a Gold Coast apartment when a “sickness” turns fellow Chicagoans into face-eating zombies. Over white whiskey and mouthwash cocktails, they discuss everything from open relationships to pizza and the “under-sexed” male to mental illness, all while escaping peril.

Radke said that he had always wanted to write a horror-centric show and was excited to create one, even on a small budget. The zombies never appear on stage, despite being the basis of the plot.

“I don’t like comedy, like at all really,” Radke said. “I don’t enjoy it. Because, you know, life is kind of funny as is. So watching something funny isn’t really the kind of escapism that I want. I like horror movies and thrillers and lots of blood and guts and that kind of shit. But I can’t write that.”

While still moving away from forced comedy — despite the occasional Millennial/old-man joke, which Radke described as “low-hanging fruit” — the show is still quite funny; the title reflects as much.

“My line, when I said, ‘I can’t wait ‘til we’re all just chilling,’ that was it, there,” DePaul alum Dave Satterwhite said. “Like what a what a boring, blasé thing to name anything. But then there’s the double entendre of chilling, like scary. All of our titles were kind of like that, I guess.”

The show also is riddled with political undertones, taking jabs at political correctness by insisting the zombies are referred to as “sick people” and hinting at bigger discussions in American politics today.

The story’s political premises came to Radke while he was taking a walk in December to retrieve gummy bears from a nearby store and comparing supporters of Donald Trump to zombies. He decided, then, to write a show exploring that concept, but without exploiting it.

“I didn’t want this to be tied to any place at the time,” Radke said. “If it’s not Trump, it’ll be something else. I did not want to write his name and I didn’t want to hear it every night onstage. I wanted to be like, when people see it now, when they watch it, it’s going to call to mind Trump, but that’s just because of the situation right now.”

The show’s theme can be easily applied to other modern-day issues like climate change, he said, noting that the core component is that Americans have become “reactionary and we’re not addressing any problems.”

Satterwhite added that as an actor who found this “real place of fear” every show while portraying his role, he believes the show speaks to more than just partisan politics, too.

“It’s beyond Trump,” he said. “It’s not so much any one group of people, it’s that we just don’t know what’s going on at all anymore. And part of that is the way the way the media is presented and part of that is how you never have access to whether people are planning something in a room far away. Everybody’s got a different take, and everybody clings to it. And that’s where we find our comfort. I think for me, this play is about that; it’s about how people cope in the face of total unknown.”

“Just Chilling” will be showing at Cornservatory, located at 4210 N. Lincoln Ave in Chicago, on August 23 and 24 at 7:30 p.m., after running every Friday and Saturday there since July 26. Tickets are $15 and attendees are encouraged to “BYOB.”