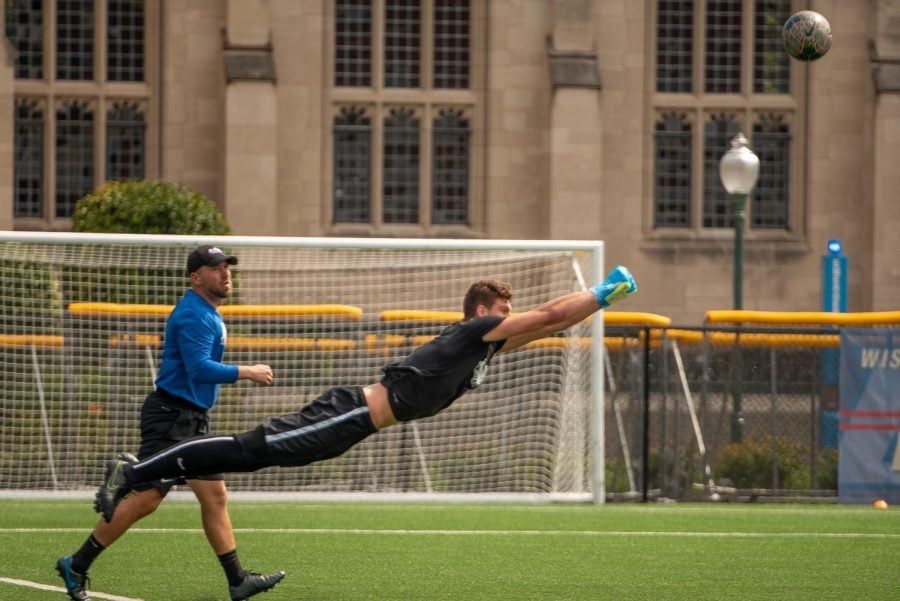 After defeating Northern Illinois 2-1 in their first game of the season at Wish Field on Friday, DePaul was back in action taking on Vermont in the second game of the Chicago Classic on Sunday. The Blue Demons, however, were not able to muster up a comeback after going down 1-0 and as a result suffered their first loss of the season.

For the first 49 minutes of the game there wasn’t much to split the two sides. Both sides struggled to create scoring opportunities in the first half, which led both teams to go into the break tied at zero.

But five minutes into the second half, Vermont took a long range out that looked like it went out for a goal-kick, but the linesman on the near side ruled that DePaul goalie Drew Nuelle got a touch on the ball, giving the corner kick to Vermont. With the Blue Demons now scrambling to defend the corner kick, the Catamounts put a good ball into the box which found the head of Rasmus Tobinski, who headed in the game-winning goal of the game.

DePaul defender Max De Bruijne was angry with the decision to award the corner kick and was yelling at the linesman before the goal was scored.

“We got the guy covered at the corner of the 18, he gets the shot off, he shoots it completely wide and the lineman is on the ball and I don’t know why he gives a corner,” De Bruijne said after the game. “They take a quick corner and head it in.”

Nuelle, who made two saves in the second half, had a good look at the shot that led to the corner kick and also agreed with De Bruijne that it should have been a goal kick.

“Obviously, it’s a very unfortunate call; it was very clear that it was a goal kick and I think our body language should have showed that,” Nuelle said. “But I was happy with our response for the remainder of the game and you couldn’t ask for much more. It would have been really nice to get a goal and send it into overtime and see what happens, but we responded to an unfortunate call. It’s part of the game, people make mistakes and you just have to move on.”

With going down a goal, the Blue Demons were then forced to commit more numbers forward and as a result they took six shots in the second but only forced Vermont’s goalie Aron Runarsson to make two saves.

DePaul’s best chances came near the end of the first half when they forced Runarsson to make three saves in the final 15 minutes of the half. Freshman David Gripman had a great opportunity to open the scoring when he rounded the keeper, but with a tough angle to finish the chance off, he put the ball wide of the net.

A couple minutes later, sophomore Jake Fuderer got the ball on the left wing and took a shot that was going in on the near post, but once again it was saved by Runarsson.

DePaul head coach Mark Plotkin was happy with how his team played and said he saw improvement from his team against Vermont, even though they failed to grab the victory.

“I think our guys are doing a good job of figuring out and anticipating passes and picking them off, and then with our attacking midfielder and our two forwards, who are so quick with combing that they can create on the counter-attack,” Plotkin said. “I think we started to find some of that in the end of the [first] half. So, we felt good going into halftime and I thought our overall performance was great, they did everything we asked, that we stuck 100 percent to the game plan, we just couldn’t find the goal today.”

After going 1-1 in their first two games of the season at Wish Field, DePaul will be heading on the road for their next game when they take on Western Michigan on Friday.