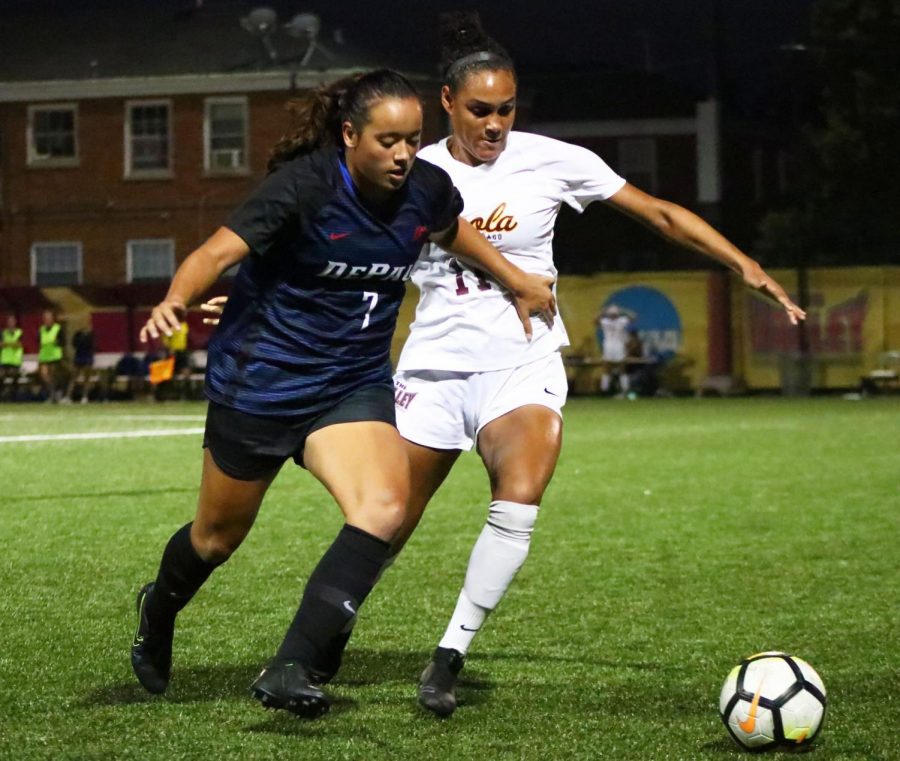 As they get closer to Big East competition, DePaul’s women’s soccer team is starting to find their groove. Last night, the Blue Demons (3-4) traveled up the red line to face Loyola-Chicago (2-4-1) in a tough rivalry game, where good chances and composure on defense allowed the Blue Demons to bury Loyola in the second half, snapping the Ramblers’ two-game unbeaten streak.

In the first half saw a lot of back and forth, counterattacks came every now and then and the looks were solid. But the ball did not find the back of the net for either team. A pair of corner kicks in the first half for the Ramblers came up short in large part because of the alert defense from the Blue Demons.

On the offensive end, forwards Kristin Boos and Morgan Turner led the attack with four shots. Both scored a goal in the second half.

The back line held together well as starters Sydney Parker, Maria Nordness, Avery Hay and Jackie Batliner helped keep the Ramblers at bay.

One star of the game for the Blue Demons was goalkeeper Mollie Erikson, who came up with four saves, including a game saver on a free kick attempt. In the second half, with the game tied 0-0, Loyola senior midfielder Ari Banks fired a shot at the top of the goal but Erikson jumped, deflecting it up and behind the goal to keep the score deadlocked.

The game then swung in favor of the Blue Demons, who had a flurry of chances in the second half. The game was finally broken open when the lone corner kick of the game came for DePaul. The play came into Boos who was able to fire one from the top right of the box to the left corner past the goalkeeper, scoring the first goal of the game.

“That’s the training ground, that’s our setpiece that we just created this week,” Boos said. “So it’s really our coaches that stepped up, we executed in the game.”

Just 10 minutes later, a counterattack opportunity came and Turner and Boos moved the ball down before Turner rifled a shot from far beyond the box, rocketing it into the left side of the net to put the final nail in the coffin.

The opportunities for goals were there in the first half as well as the second, but everything came together in the final 45 minutes.

“I thought we had two good chances in the first half, mostly off of counters,”  head coach Erin Chastain said. “I think the game was very open in the first half and both teams were getting counters. I think this rivalry game is always going to be a little bit ugly in terms of players throwing their bodies and trying to win first and second balls.”

DePaul and Loyola are familiar foes. The teams have always made the trip across the north side early in the season. DePaul is now 5-1-1 in the past seven matchups. But even with the lopsided recent history, the games are tight.

“It’s always a really hard-fought game from both teams,” Chastain said. “We have a lot of respect for their program.”

And the rivalry is being passed down from the older players to the youngest.

“Even though I’m a freshman our upperclassmen really put it in my head before this game that it’s a rivalry and that we have to play hard and stick it out until the end,” Boos said.

And the game was gritty. There were a lot of instances where the defense contested shots and took the ball away from Loyola’s front line. There were also a combined 30 fouls in the game.

In the second half, the set piece opportunities came in for Loyola. Erikson communicated to the team and they were able to thwart all chances.

Looking forward, the team has some positives to take into the rest of the season.

“I think our group is going to fight for each other and defend each other,” Chastain said. “And I think as we start to kinda get more games under our belt, hopefully we see our attacking chemistry grow so we can create more chances in games.”

The Blue Demons next face Bowling Green on Sunday at 1:00 P.M. at Wish Field.