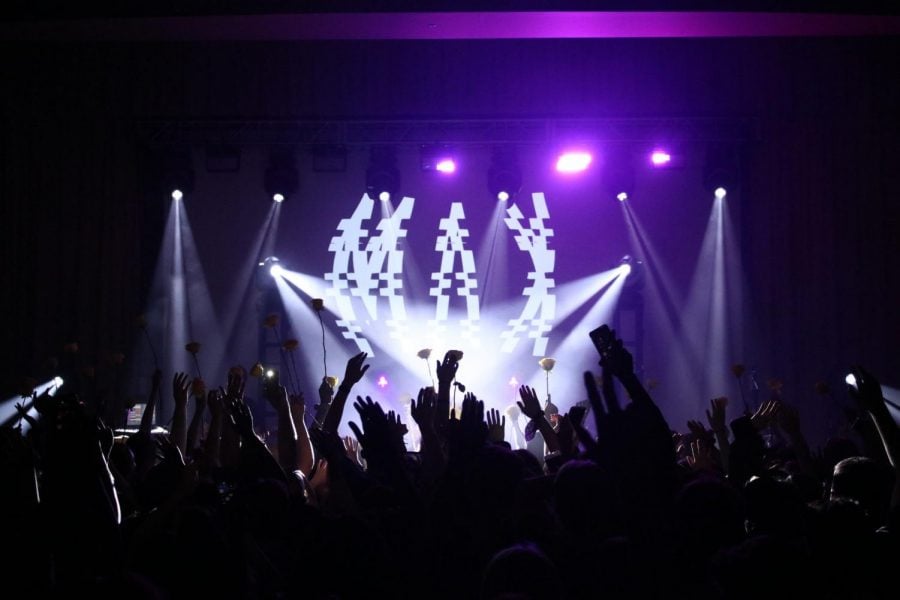 Before Max Schneider, whose stage name is MAX, took the stage, his team handed out yellow roses to the still-growing attendees of the DePaul Activity Board’s annual “Demon Jam.”

Demon Jam, the DePaul Activity Board (DAB)’s annual Welcome Week concert, saw an increase in attendance of nearly 34 percent at this year’s event. The headliner was singer/songwriter Max Schneider, whose stage name is MAX.

The concert, which took place Sept. 11, had 760 attendees, while last year’s event saw only 258, according to Precious Simpa, DAB’s junior chair for signature events and the planner of this year’s Demon Jam

“With what I heard about last year’s, I can say things went [as] planned better this time,” she said. “The students were really engaged and they had so much fun.”

She added that because the event took place on the first day of classes, they were expecting a lower turnout, but were “pumped and excited” to see the significant increase.

A line primarily made up of first-year students began forming around 7 p.m., creating an environment of nervousness and excitement that only a Welcome Week event could create.

When Peter Schultze, a DePaul student and DJ known as “Skeet Pete,” took the stage to open for the headliner, the crowd had already made its way to the front of the room.

In addition to the conversation and dancing the event fostered, a buffet of chicken tenders with three sauces — ranch, buffalo and honey mustard, though there were two containers of ranch and one of both the others —, vegetables and brownies was available for students, along with a “First Day of School”-themed photo station.

The event saw many changes this year, including a new venue and updated safety precautions.

Last year’s Demon Jam was held in McGrath-Phillips Arena, but this year, the event took place in the Student Center, Room 120 AB. Part of the decision to switch locations was so the target audience — freshmen — would be more inclined to attend.

“Freshmen needed to be able to find the space more easily,” Simpa said. “But we also wanted people who weren’t planning on going to see the event going on and grab people to go check it out.”

Before entering the venue, the students were asked to walk through a metal detector, which Simpa said was an additional level of security compared to what was used in previous years. Safety was of great importance, she said, citing the rise in dangerous activity near campus and the event’s space being “enclosed” as reasons for adding the detectors.

Before he took the stage, MAX’s team handed out yellow roses, which the audience held high, chanting his name in anticipation of the show. His appearance garnered screams from the crowd.

Some students said their primary reason for attending the event was the fact that MAX was the headliner.

“I heard of the event because of the artist, and I’ve been trying to get out more,” freshman Rylan Burns said.

But many who attended said they didn’t know MAX at all, and had hoped the event would be like a mixer for new students on campus.

“I’m new to Chicago and don’t know anyone,” said Aref Legheri, a new graduate student, who fervently shook his head when asked if he’d heard of MAX before. “I don’t know this person, but I’m trying to get involved with campus events.”

To keep the room energized, MAX leaned over the barriers and nearly waded into the crowd several times, each attempt causing an outburst of cheers to fill the Student Center. He also encouraged the students to sing along to his most well-known song, “Love Me Less,” enticing them by saying that if they sang loud enough, they might make it into a video he’s working on for the song.

Some students began leaving the show before it ended, but most stayed.