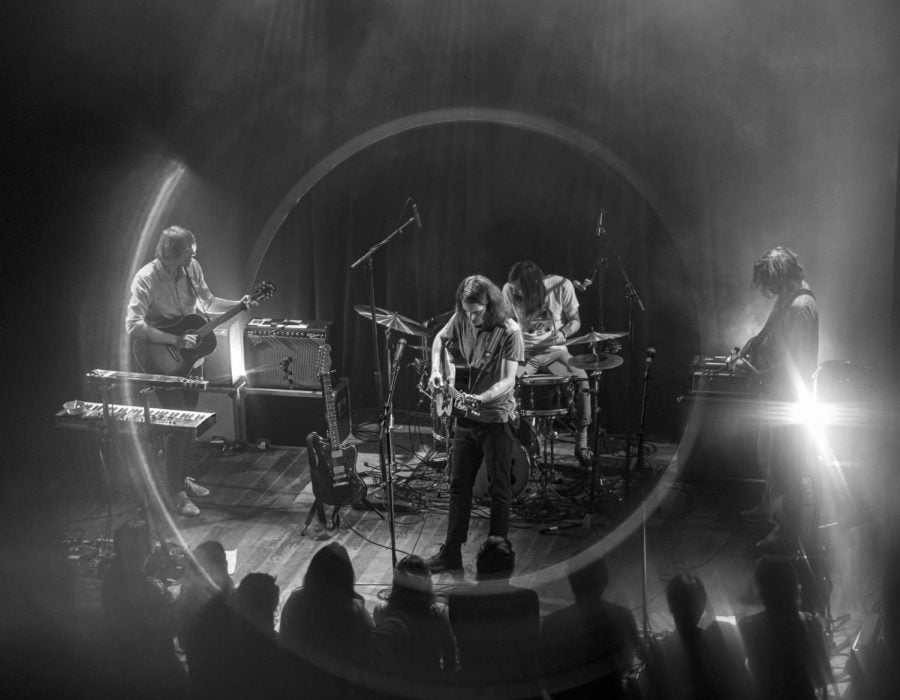 Even though there wasn’t a surprise Modern Baseball reunion, Slaughter Beach, Dog gave a performance to remember at Lincoln Hall Friday as a part of their Safe and Also No Fear tour—to accompany the release of their third album of the same name.

Created in 2015 by Jake Ewald, Slaughter Beach, Dog originally served as an outlet to combat his writer’s block while writing new music for Modern Baseball. Following the group’s “indefinite hiatus” in 2017, Ewald has since focused on the project, further exploring a new sound to showcase his growth as an artist.

Cave People — another Philadelphia-based group featuring Farmer and Robbins — joined the band along for the ride.

Before the official start of their set, frontman Dave Tomaine took a moment to remember a friend who was supposed to tour with the two groups but tragically passed away before the first date.

To honor their friend’s legacy, Tomaine read one of their poems from a small notebook as the lights dimmed throughout the venue to reflect the somber occasion.

The energy quickly picked up as the set began with “Fair” and did not falter once as the group played new and old tunes.

Tomaine established a genuine connection with the audience through his charismatic stage presence and hilarious commentary — from discussing his first visit to Culver’s earlier in the day to the cancellation of Pennywise on Twitter.

The band closed out their set with new tunes from their latest release “Salt.” Prior to departing the stage, Tomaine explained all proceeds from the album go to Juntos, an organization fighting for immigrant rights, and encouraged the audience to get involved with local organizations.

I’ve also never left a show with a genuine intent to listen to an opening band if I hadn’t already prior to the show, but Cave People changed that mindset with their sheer talent, charisma and dedication for social justice.

Scanning the audience tightly packed into the 500-person capacity venue, it was apparent who had been fans of Ewald during his Modern Baseball days and who had discovered him through Slaughter.

Ewald, in a brown button-down top and black jeans, took to the stage not long after the opening act departed. Joined by Farmer — donning khakis tucked into a green short sleeve flannel — you never would have guessed either of them were once members of one of the most popular Midwestern emo groups.

The band wasted no time starting their set with “One Down” and immediately going into their beloved hit “Acolyte.”

“The Dogs,” a contender for one of the best songs of the set, followed “Gold and Green” and truly displayed Ewald’s artistry. Maintaining a conversational yet rhythmic tone, he managed to make the mundane acts detailed in the song seem beautiful — a trend in many of this project’s pieces.

“Good Ones,” “Sleepwalking,” “Won’t Be Long,” and “Tangerine” masterfully followed each other — the momentum of the set unwavering.

As they prepared for “Heart Attack,” Ewald mentioned that they strategically planned the show to happen the first day of Riot Fest and attempted a question and answer session with the crowd — until someone asked about this favorite color.

“I’m colorblind,” Ewald playfully said. “Thanks for bringing it up.”

Things slowed down with “Map of the Stars,” but immediately picked back up with “Black Oak.” Blue lighting engulfed the stage at the start — resembling the scene on the cover of “Safe And Also No Fear” — but eventually became minimalistic in the best way possible. Beams of light hit the disco ball situated at the center of the ceiling as the venue was transformed into a scene right out of a movie.

After “More,” Ewald again attempted to allow the crowd to ask questions, but this time someone requested a rendition of “Wonderwall.”

Even though he said everyone in the group knows how to play it, they instead did “Your Cat,” which is arguably better. The enthusiasm from the crowd was at an all-time high and it seemed like a pit would open up, but no one was brave enough to take the plunge.

Ewald gave thanks to the crowd and The Bean — and rightfully so — before diving into “Politics of Grooming” and “Anything.”

The set concluded with “104 Degrees.” Listening to the recorded rendition of the song makes you feel like you’re watching the end scene of a coming-of-age movie, but hearing it live makes you the protagonist.