OPINION: Don’t count out the progressives

Biden may still be the front-runner in the crowded Democratic field, but the election is far from decided with left-leaning challengers wooing American voters 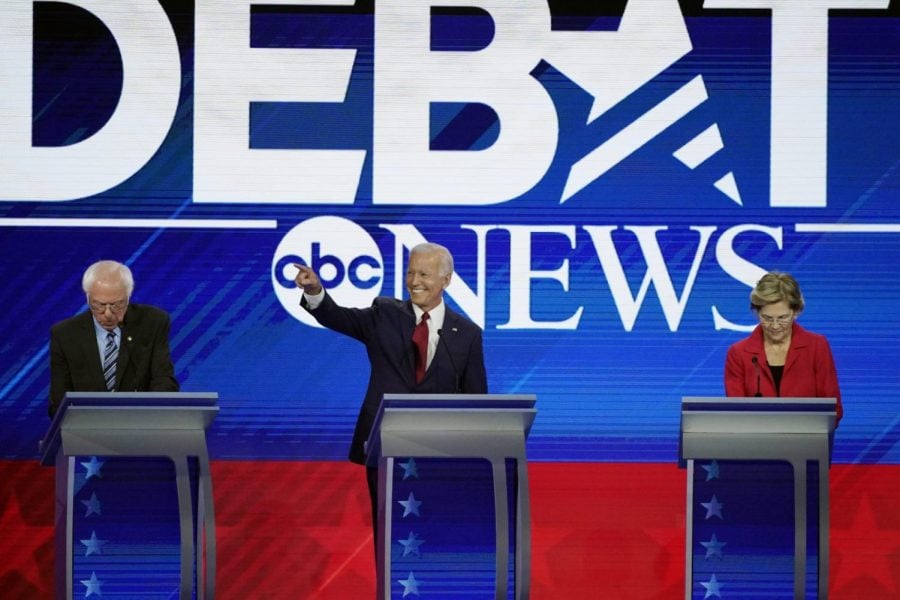 The 2020 Democratic primary elections hold incredible importance regarding the future of the American presidency, more so than in most, if not all, presidential elections in recent memory. Should the Democrats lose: another four years to the populist demagogue who they believe threatens the sanctity of American unification on the principle of redemption of a forgotten moderate white working-class demographic that elected him. Should they win: well, it depends.

This idea of another four years of President Donald Trump resonates with many Democratic voters, especially progressives who occupy up to roughly 40-45 percent of the primary vote, according to political science professor Wayne Steger. Winning the election is seen as life or death to progressives, yet the irony is that it seems like the party’s best chances are in the hands of the current frontrunner, moderate Joe Biden.

Former Vice President Biden has been likened to a lite populist by the news outlet FiveThirtyEight and his bipartisan potential is reinforced by demographic polling that shows that he does well with moderates and conservatives, less than college-educated people, non-seculars, black communities and members of every economic class.

Part of the reason for his agreeable tendencies and wide base of support is due to his vague platform and policies. He generally harkens back to former President BarackObama’s message: inclusion, bipartisan unification and equality.

“The more specific you are, the more the cost of your policy proposals are apparent, the more problematic it gets,” Steger said.

Biden’s platform absolutely fits this, and similarly fits Trump’s in 2016, which was not predicated on hard policy creation.

Steger continued, saying how Sanders, Warren and Harris are effectively fragmenting the progressive vote and are “trying to outdo each other” on policy specificity.

Unlike Steger, however, another political science professor, Ben Epstein, doesn’t see policy and platform specificity as a hindrance.

Despite this, Epstein stated that “most candidates are able to talk about most issues.”

In the case of U.S. Senator Elizabeth Warren, whose platform he says is perhaps the most narrowed and focused on a single issue, she and other candidates are able to talk about many issues in depth. He even points out how Warren often says she “has a plan for that” as a common catch phrase of her campaign. Even if you look at candidate and entrepreneur Andrew Yang, his platform is largely focused on universal basic income, but if you look at long-form interviews or the policy page of his website, he has a detailed policy for pretty much any major issue.

The utmost importance to Epstein are the candidates “brands,” or shorthand ways they can be identified by voters.

“Cory Booker is about positivity, that love is better than hate, and Kamala Harris’ background is as attorney general and criminal justice,” Epstein said.

Epstein’s perspective is particularly interesting as a counterpoint to Trump’s methods in which specificity and branding might actually succeed over vague remarks in the general election. Hopefully Americans have learned to better filter and assess what they consume and are more eager for details.

Nonetheless, the contentious Democratic field poses problems to the electability of a candidate who can defeat Trump and that the entire party can get behind.

We’re seeing disunification again on the Democratic side this year, and it makes being an undecided voter tumultuous. That being said, to look at the field and decide or judge based on a moderate or progressive basis would be “overly simplistic” in Epstein’s words and not really taking into account other factors.

“[There were 10 qualified candidates] for the Sept. 12 debate,” Epstein said. “That doesn’t mean that these are the only  10 candidates we’re ever going to hear from again.”

Both Steger and Epstein agree that the race is anything but decided and has the potential for candidates not in the top five or six to break in, especially given that the qualifications for the October debate is the same as last week’s. Epstein notes that there are two considerations for this.

“One, we could ask, who do we think has a possible chance of winning the nomination… and who has a plausible path to impact this race in a really meaningful way,” Epstein said. “I think that, for instance, someone like Andrew Yang has the potential to have people start talking about technology, start talking about universal basic income, in a way that others have to respond to.”

Steger echoes this sentiment, using former President Jimmy Carter as an example of an underdog campaign who won the Iowa caucuses after only polling at about 1 or 2 percent.

“What most people didn’t pay attention to in the media that year is that over 40 percent were undecided, and so Carter goes on to become the frontrunner,” Steger said.

“The debates are watched within primary voters and Democratic party voters, the kind of [polling] differences you’re going to see coming out of the debates are really going to be in the primaries,” Tejeras said. “But when it comes to the general election, I’m not totally sure on whether the debates are going to have that much of a change.”

While the crowded field of candidates may be overwhelming for voters, the candidates all have something valuable to offer.

So much can be criticized about the electoral process, whether it be debates that can often boil down to media-controlled frenzies or over-reliance on controversial superdelegate and endorsement power, but it’s important for the electorate to take advantage of many new progressive viewpoints and elevate them if they are worth fighting for. So long as we are supporting a variety of voices, the best candidate for America will naturally take center stage.