Blue Demons miss plenty of chances, forced to settle for a draw 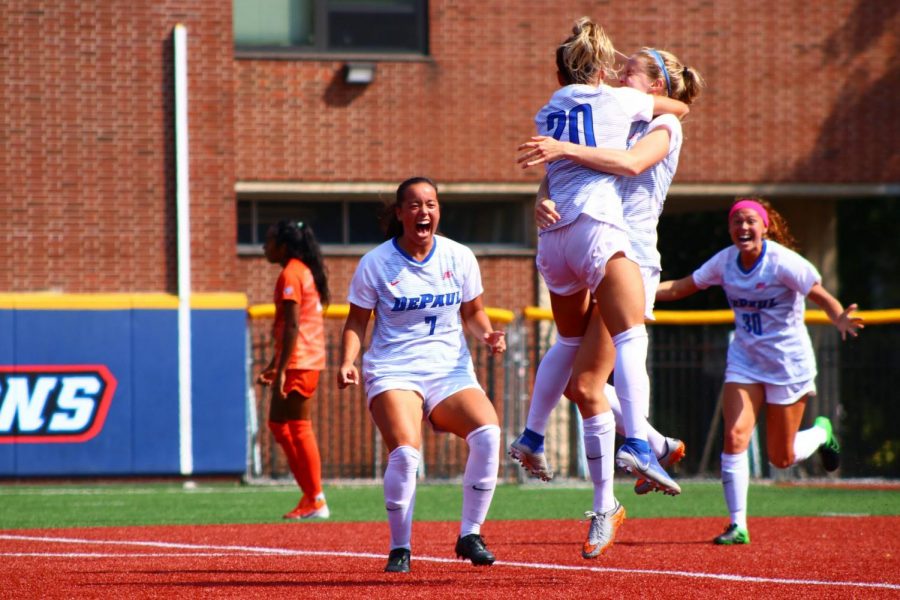 Coming off of a win and entering a new part of the season, the DePaul women’s soccer team (3-4-1) took on Bowling Green (2-3-2) in a Sunday matinee game at Wish Field. The first and second halves were decidedly different and, after two overtime periods, the teams tied at a score of 1-1

In the first half, the Blue Demons came in with a strong emphasis on defense. The team was playing a lot of the game off the ball in their half of the field while the Bowling Green midfielders tried to make something happen. The first 30 minutes saw a lot of control by the Falcon’s offense.

Toward the end of the first half, the Blue Demons found more of their offensive identity and took some control back. A few set-piece opportunities allowed some close chances for the team, yet they failed to get anything on goal. A couple of crosses could not find any follow-up.

The first goal came in for the Bowling Green Falcons with only three minutes left in the first half. A free-kick from the right side was struck well and goalkeeper Mollie Erikson came out of goal to try and leap up for the ball but it bounced over the wall of players and dropped in the goal. After breaking the deadlock, Bowling Green lead 1-0 after the first half.

A couple of differences between the teams in the first half came in aggression. The Bowling Green Falcons had 11 fouls in the first 45 minutes, and three yellow cards to boot. DePaul had only three fouls and took away a lot of balls cleanly, yet still struggled to establish any legitimate counterattacks.

“At halftime, our coaches really ripped into us about our work in the first half and how it was less than what we are used to, what we can do and what we are capable of,” freshman forward Kristin Boos said.

Morgan Turner made her mark on the game with her own theatrics just three minutes into the second half. She dribbled the ball out to the right side, found her separation, and struck a calculated and beautiful shot past the diving goalkeeper into the top left of the goal. The equalizer was a product of the newfound energy brought into the second.

“I think that in the second half, we really stepped up offensively and we changed our formation, which really helped us get a lot more chances,” Turner said. “I think we also were able to battle really hard in the second half to get the first goal.”

That energy in the second half kept on for both teams. The Blue Demons were able to get a lot more shots on goal and find an offensive groove.

“Our motivation was that we weren’t going to sit back and let this team pass around us, we are going to take initiative to take the ball and make something happen,” defender Avery Hay said.

Both Jade Eriksen-Russo and Mary Tierney had one-on-one chances with the Bowling Green goalkeeper but were shut down on both shots.

With 11 minutes left in the second half, Kristin Boos created something out of nothing: Despite tons of pressure from Bowling Green defenders, Boos was able to fire a clean shot but it just missed above the crossbar.

The Blue Demons offense took over in the last 20 minutes. Both teams spent most of their time in the Bowling Green side of the field, with constant pressure applied by Boos, Eriksen-Russo and Tierney.

“I thought we had a really great chance to score and go up 2-1 which we didn’t quite execute how I’d like us to. But that’s soccer,” head coach Erin Chastain said.

With just five minutes left, a ball was played in beautifully to Turner who was tripped up by the goalkeeper who made the play on the ball. What could have been the best chance for DePaul came up empty. Despite the flurry of shots, the two teams went to overtime.

In overtime, there was a lot more back and forth to start the first period. Both teams found equal chances.

Bowling Green found a counterattack opportunity and a shot chipped over Erikson for what looked like the game-winner, yet offsides was called and the teams played on.

The game stayed tied after the first overtime period.

The second period saw DePaul get a few more opportunities. With three minutes to go, the team got two corner kicks back-to-back and got nothing out of it. The game dwindled down and it was a frustrating draw after two scoreless overtime periods.

Even with the disappointment of not getting a win, the draw result still allowed the team to come away with a positive outlook on their resiliency.

“When you play not so well in the first half, you can either turn around or you can continue to play like you were and I think we just found it in us to change the way of the game,” Hay said.

The Blue Demons will look to improve upon their 3-4-1 record when they take on Samford on Thursday at Wish Field. The team will then have nine days to prepare for their first conference game, which is on the road against Creighton on Sep. 28.