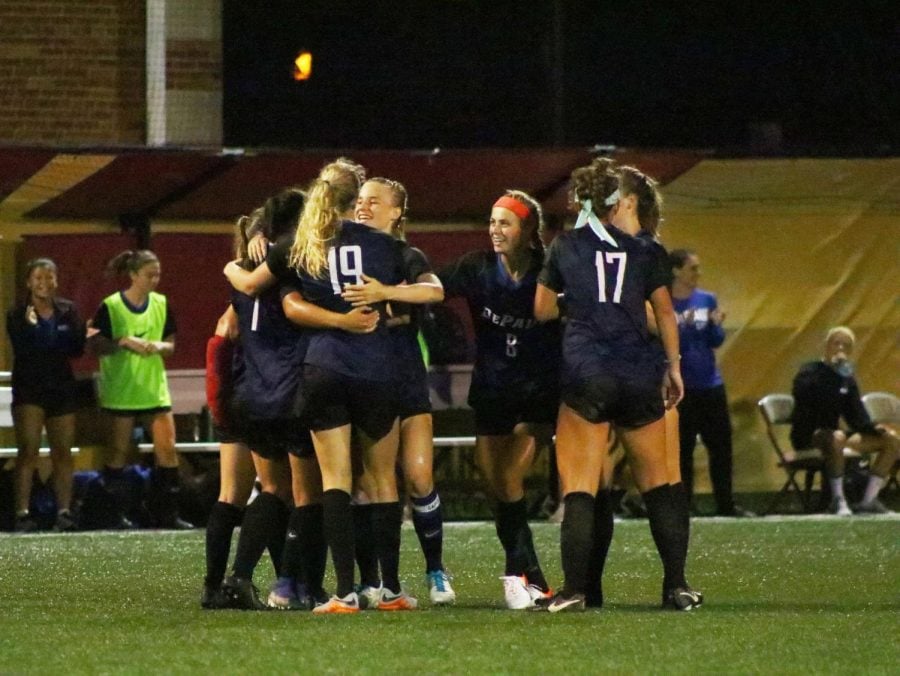 DePaul junior forward Morgan Turner celebrates with her team after scoring the second goal for DePaul. Turner’s shot from outside the box put DePaul up for good.

Even in a long season, good teams tend to find themselves some time to reflect and strengthen up before the toughest stretches. For the women’s soccer team, they have found a comfortable time. In between regular-season tournaments and Big East conference play, there’s a lot to assess within the team. Coming off of the biggest game of the season to date, a win over No.11 Univeristy of Kansas on Friday, Sept. 6, the team is starting to find what they do best.

The start of the season was not ideal. Before the start, two starters, and All-Big East players, Adrian Walker and Ellie Mink were injured. In the spring, both players suffered ACL tears. Youth is also a story as the team does not have any seniors on the roster this season, a first for head coach Erin Chastain in 13 seasons at the helm of the program.

The youth of the team brings a new and welcome change to the squad.

“I think we have a pretty young group, in terms of having no seniors on the team,” Chastain said. “We’ve happened to have four kids who all red-shirted at some point due to injury which has just left us with less experience than I think most of our teams have had.”

As for the loss of two starting players, it’s been tough but manageable.

“Adjusting to not having [Walker and Mink] on the field was a challenge,” she said. “But I think the team has just taken a little longer to figure out what’s going to work for this group and what is going to work going forward this season.”

In the opening games of the season, the Blue Demons showed some defensive woes, losing three straight games and allowing two or more goals in each contest. The shortcomings early on accumulated into their success against the University of Dayton where they won 1-0 with a solid defensive performance.

“When we went to play at Dayton, it was a road game and it was super hot and a lot of kids had played 90 minutes on that Thursday in a disappointing loss,” Chastain said. “So I think that was a step in the right direction for our group in terms of having a shutout and a great defensive performance considering we did not have that earlier in the season.”

The win against Dayton was the first of the season, and the team was able to carry that into the game against Kansas. At Purdue University in West Lafayette, Indiana, the team played No.11 Kansas and No. 7 South Carolina. In the Kansas match, DePaul’s defense was able to post a shutout to hand the Jayhawks their first and only loss of the season.

With only five shots, the opportunities were slim but they were able to capitalize in the second half, where junior center-fielder Jade Eriksen-Russo scored an unassisted goal to break the 0-0 scoreline. The game was a breath of fresh air for the team.

“It felt great, I think that game was a turning point for our team because you could feel the energy and the way we were playing off of each other,” Eriksen-Russo said. “We proved to ourselves that we play as a team. And I think from that point forward we are just going to continue to grow on that.”

Not only was the win against Kansas a great opportunity for boosting the team’s morale, but it was a shining moment for the veteran players.

“It was definitely one of the most incredible experiences I have had at DePaul so far,” Morgan Turner, junior forward, said.

Looking forward, a win against Kansas can be the opportunity for a legitimate leap heading into Big East play. If the team is looking to establish success and fulfill their goal of winning the tournament, having a game like the Kansas game under their belts will give them a great deal of confidence.

“I think everyone played with so much intensity and determination and I think that will carry us through the rest of our games too,” Turner said.

Also, they gained assurance, knowing that their team is solid and have the ability to go and beat some of the better teams in the country is powerful. In the Big East, they will not see a team like Kansas or South Carolina.

“I think our focus has been on all these games to prepare us for conference. Knowing that we played a challenging schedule and knowing that when we get to conference were not going to see anything we haven’t already seen is good,” Chastain said.

Big East play provides an opportunity for even more intense games. There is a level of comradery and implications that comes in those contests that the older players on the team know very well.

“I think I am most looking forward to playing really great teams and competing with them because we are here to prove that we deserve to get some titles on our backs. And I think that from the past weekend, we proved to Kansas in our recent victory that we are not only here to compete against these teams but to win,” Eriksen-Russo said.

Big East competition starts on Saturday, Sept. 28 against Creighton University on the road.