During a conversation with student journalists, Booker proved himself a politician for the people. 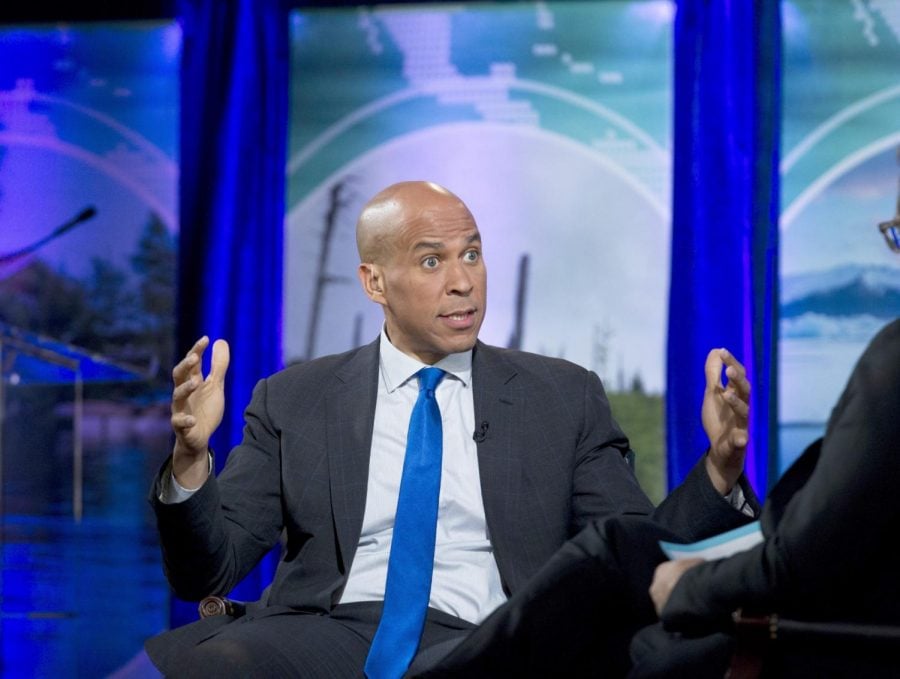 Senator Cory Booker, photographed at the Climate Forum at Georgetown University on Friday.

As the crowded Democratic field begins to whittle down, I’ve kept my eye on Cory Booker. Not just because he’s the senator from my home state and I have a weird, unwavering devotion to New Jersey. Not because he’s rumored to be dating actress Rosario Dawson. Not even because during his time in office he ran into a burning building to save some of his constituents.

Compared to the three leading candidates – Joe Biden, Elizabeth Warren and Bernie Sanders – Booker has struggled to break through, perhaps due to the mild-mannered “everyman” image he presents to the country. But I think that’s authentically who he is. Raised in Newark, New Jersey, he travelled far and wide to attain an education but ultimately returned to his roots — to a struggling city in the grips of financial turmoil and an epidemic of violence.

Nearly two decades have passed since he first ran for mayor in Newark and his track record of tangible change is clear. Yet, he can’t seem to quite sell that message to voters outside of his home state.

Booker has remained in the front of my mind because of what I perceive as a genuine interest in the concerns of all Americans. That’s why when he sat down late on a Thursday night for a conference call with student journalists across the country, he happily fielded questions on a variety of topics — anything that we wanted to ask.

Ahead of the Iowa Caucuses early next year, a journalist from Iowa State University asked Booker, who is currently polling at 6 percent with caucus goers in the state, how he sees his path forward in Iowa. Booker responded confident and poised, as he often does.

“We actually believe that we are one of the best campaigns to win because of the history of Iowa,” Booker said. “There has never been a time in the last 50 years where somebody from the Democratic Party was polling ahead this far out ever went on to be President of the United States. Jimmy Carter was polling extraordinarily low, Bill Clinton was considered a long shot and Barack Obama was 15 to 20 points behind Hillary Clinton at this time. All of these people went on to upset the election. Iowa is a place where you see the underdogs winning.”

Moving from election predictions to policy, a few newspapers focused in on college debt, no doubt one of the most pressing issues immediately facing the young voters who comprise the bulk of student newspaper readership.

Booker acknowledged the severity of the issue, including the loan crisis as well as the ever-increasing cost of an education in general. He expressed confidence in his ability to champion a bipartisan bill that actually has a chance to make it through Congress while expressing empathy for those who have been burdened by the financial realities of higher education in the past.

When the conversation turned to race relations in the country, Booker, one of only two black Democratic candidates, was eager to showcase the reality that a lot of tangible change is possible just through legislation.

“It’s about making sure we have a president that is using the Department of Civil Rights in the Department of Education to actually take proactive steps to make sure that there are safe and inclusive environments in education K-12 and even into college,” he said. “Making sure we have a Department of Justice and others actively dealing with white supremacy and implicit racial bias in policing and police tactics. There’s so much we can do practically through the actions of a president to deal with this.”

Whether it be making an incredibly cringe-inducing dad joke about the “toughness of Tufts University” or quoting Dr. Martin Luther King, Jr. off the top of his head just moments later, Booker cemented his intellect and interpersonal skills at once. Wanting to join a presidential candidate for a beer has long been an unofficial predictor of one’s electability and not only do I want to join him for a beer, I want the rest of America to see why.

When I asked him why his core message — one of unity, empathy and compassion — is the one that will best resonate with young voters, Booker seemed eager to lay out precisely why.

“The leaders we need to elevate from our party are ones that encapsulate our moral imagination, that inspires our highest aspirations as a people, that are bold and optimistic about the future,” he said. “If you elect me president, I’m going to ask more from you than any president has ever asked in your lifetime. I’m going to ask you to serve more, to help more, to be there more for your fellow Americans because that’s the definition of citizenship.”