E-cigarettes are a handy way to kick nicotine addiction. If unchecked, they can raise the same problems they're used to curb. 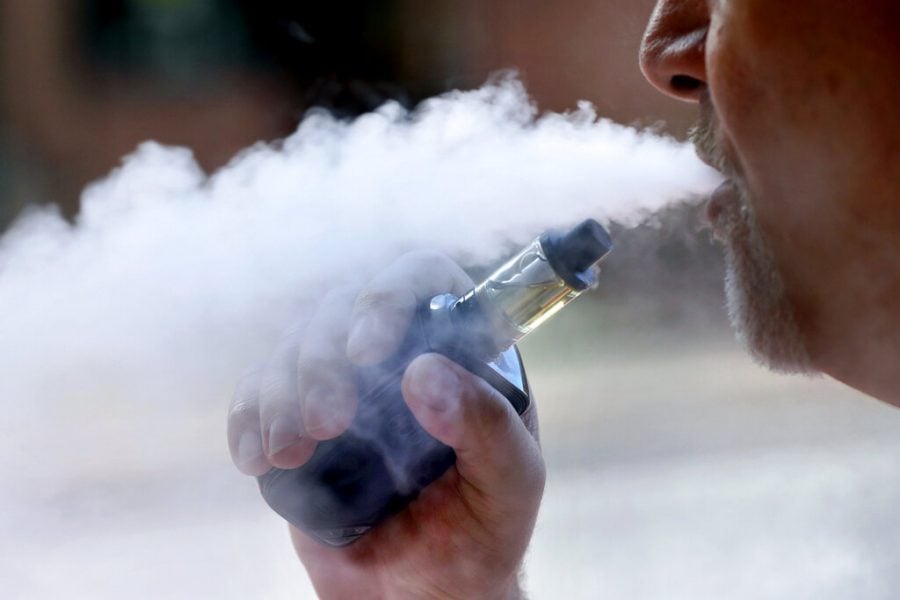 In this Aug. 28, 2019, file photo, a man exhales while smoking an e-cigarette in Portland, Maine. Walmart says it will stop selling electronic cigarettes at its namesake stores and Sam's Clubs following a string of illnesses and deaths related to vaping. The nation's largest retailer said Friday, Sept. 20 that it will complete its exit from e-cigarettes after selling through current inventory. It cited growing federal, state and local regulatory complexity regarding vaping products. (AP Photo/Robert F. Bukaty, File)

All hell may be breaking loose for teens and college students across the country who use flavored vape products due to the ban that just began.

For anyone who’s somehow unfamiliar with vaping, vaping is considered a “safe” alternative to smoking. Vape devices heat nicotine and liquids, or sometimes other substances such as THC. The cartridges or pods, whichever you wish to call them, come in different flavors; some popular ones are mint and mango. They create vapors that look identical to smoke, but aren’t, per a study conducted by UCLA. This leads vape users to think that they’re taking a safer route than smoking.

According to the Washington Post, President Donald Trump proposed a ban on flavored vaping products following a series of vaping-related deaths. The proposed ban has lead to a variety of online debates, with some stating that the issue is not dire enough to warrant a full ban of e-cigarettes.

Forbes reported that the CDC confirmed eight deaths linked to vaping. Will the ban on sales of flavored vapes bring an end to vaping, or just lead to people finding risky routes to obtain their nicotine fix?

Many are lashing out at the powerhouse company, Juul Labs, for the mysteriously increasing number of illness cases. Some teens and young adults have even taken to social media platforms, such as Twitter and Instagram, to create campaigns against vaping and to urge others to quit. Two of the popular ones are #DitchJuul and Lung Love.

It’s a double-edged sword. If it helps someone quit smoking actual cigarettes, then so be it. However, I don’t think they’re trendy or something that anyone should pick up and do to fit in with the crowd.

Kim Amer is the interim director at the School of Nursing. She specializes in nursing science, child and family health.

Amer said the impact vaping has on lungs isn’t healthy, with consistent use resulting in serious concerns.

“X-rays are showing accumulation of oil in the base of the lungs,” Amer said. “This has been found in CBD or oil with cannabis. But there may be slower and equally lethal results from all vapes.”

However, she claims that there isn’t enough data on the impact of vaping because it’s too new. She said that deeply inhaling a foreign substance isn’t healthy.

Amer wants to know the appeal vaping has for young people.

“Why do people vape?’ Is it cool, a stress reliever, etc.?” Amer said.“Young people need to take care of their bodies.”

Amer also says that there are severe consequences to vaping, like severe illnesses and death.

“X-rays are showing accumulation of oil in the base of the lungs,” Amer said. “This has been found in CBD or oil with cannabis. But there may be slower and equally lethal results from all vapes.”

Amer said that teens and young adults are very susceptible to other risks in addition to Juuling, like drug addiction and alcohol abuse.

Natalie Martha is a student at the University of Illinois at Chicago. When she’s not in class, she works at Smoke Shop Pipes & Stuff XX.

Martha said that about 75 percent of their customers are college students, and that the shop being near campus is what affects their demographic.

She said that the ban on flavors “might alleviate the problem and actually make vaping more beneficial than not.”

She said that the flavored vape ban will be a huge setback for vape shops.

“We sell items besides vapes; flavored products are our top seller,” she said. “We currently sell third-party vape products and I believe they are banning those as well. I predict that those who still want flavored vape products will find a way to get them.”

Jenna Panega is a student at Loyola University. She does not vape because she knew they were most likely dangerous.

She has had friends who vaped in the past and have quit, but others are still using them regularly.

Panega believes that the ban could go either way.

“I personally feel like just banning some flavors will not scare people into not using them,” Panega said. “However, I do think there will be some type of correlation with news stories published about vape related illnesses and decreased use of them.”

Much like Amer, Panega believes that there’s not enough research on e-cigarettes to use them safely.

“More research should be implemented into identifying the dangers of vaping,” she said.

Vape products have their risks, just like everything else does. To utilize one in order to stop smoking cigarettes is understandable. To continue using it afterwards because you’re addicted to nicotine defeats the whole purpose.

Whether teens and young adults are victims of falling for trends or simply picking up bad habits, this is not a habit that’s wise for anyone to pick up.

As for anyone who doesn’t have a previous history of smoking and just decided to start vaping, juuling, or using e-cigs because of the trend, it would be in your best interest to stop.