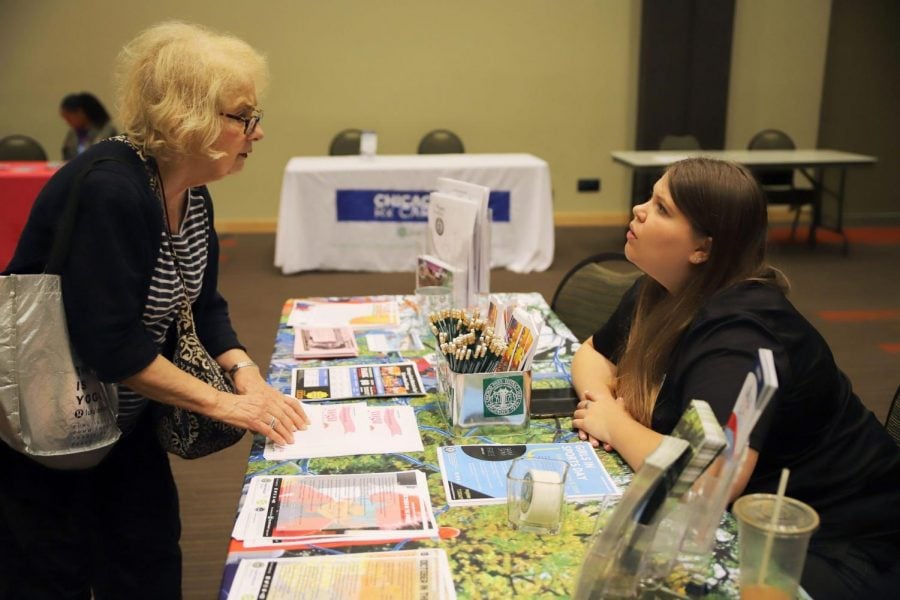 City Hall was brought directly to students on Thursday, Sept. 20, moving into the Student Center in Lincoln Park with its new Mobile City Hall. The event was held by the City Clerk’s Office to provide students and the surrounding community with resources and information that would usually require them to take a trip to City Hall.

“We started Mobile City Hall in June to bring resources directly to the communities,” City Clerk Anna M. Valencia said. “A lot of people work during the day or need childcare, so we’re bringing the services to where people live their everyday lives — It’s a one stop shop.”

These services included registering to vote, getting dog licenses, purchasing city stickers and applying for CityKey.

The CityKey is not a literal key to the city, but it ends up being pretty close. CityKey is a card that can act as an ID, a Ventra card, a library card and an Rx card for prescriptions and storing medical information.  If you already have a Ventra card, the accounts can be merged onto the single, CityKey card. It can also provide you with discounts for businesses around Chicago.

Originally, the only traveling service City Hall provided was applications for CityKey. With the integration of other services, Mobile City Hall was born this past June.

“The three biggest pillars of our office are accessibility, openness and collaboration and this event really embodies that,” said Treshonna Nola, the Deputy Chief Communications Officer at the Office of the City Clerk. “There’s a lot of people that don’t have time to go to City Hall to do this so we come here and connect it all in one place.”

Mobile City Hall also promoted an app called CHI 311, where you can find information on nearest police stations, ‘L’ stops, post offices and libraries wherever you are in Chicago. The app also allows you to make requests like garbage cart maintenance, pothole and rodent complaints and damaged street light reports.

The event provided a point of connection to Ald. Michele Smith, 43rd Ward, the alderman for DePaul’s Lincoln Park campus, who attended the Mobile City Hall.

“We wanted to be here for students,” said Margaret Gaecke, Smith’s Manager of Operations and Logistics. “I don’t think a lot of students outside of political science really understand what an alderman is and what they can do,” she said.

For students living off-campus, understanding what the role of your alderman is useful for concerns like residential issues and keeping up with what’s happening in your ward.

“When you’re in your 20s you don’t feel a lot of agency to do things like fight your landlord,” Gaecke said. “So it’s nice to have a connection with your aldermen to seek out resources and have a source of information.”

When the City Clerk’s Office was deciding where to bring Mobile City Hall, DePaul was one of their top choices, said Jorge Ramirez, the Deputy Chief Operating Officer at the Office of the City Clerk. The space’s large size allowed all of the services to be on display, and its location at the heart of Lincoln Park, where past Mobile City Hall turnouts have been successful, was ideal.

While the event could have been advantageous for students, with the benefits and access of a City Key, not many showed up.

Paulina Mayorga, senior, wasn’t aware of the event at all.

“If I had known [about the event], yes, I would’ve walked in and got an ID. I need a new one because I just turned 21 so that [would have been] very convenient,” she said.

Regardless, the event gave students the opportunity to see firsthand what City Hall can provide and a connection to resources.

“Seeing it on campus and having it be in our communities makes it much easier to access,” said Anna Scudder, a senior here at DePaul, “City Hall is something we know from childhood books but not something that’s real, so this is important.”