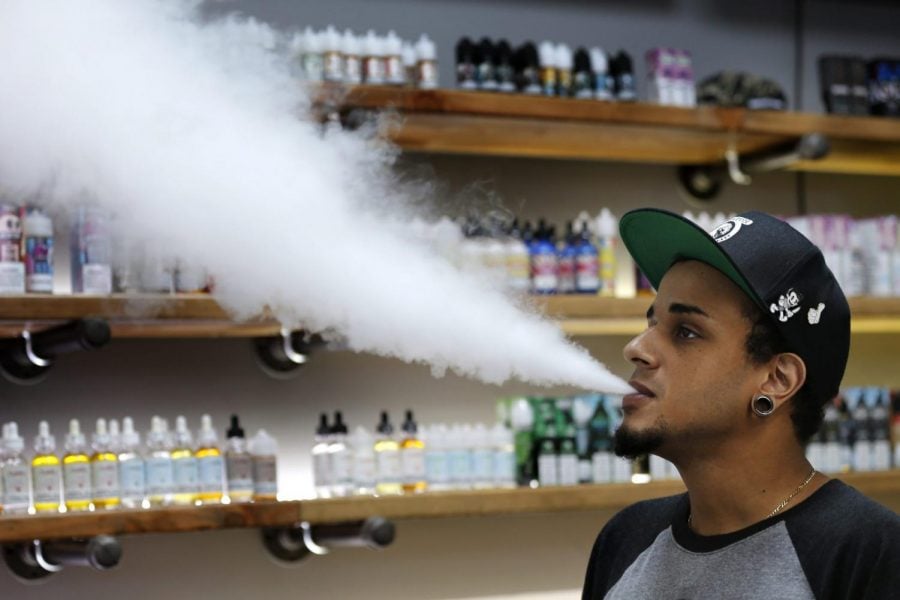 In this Tuesday, Sept. 3, 2019, photo, Andrew Teasley, a salesman at a Biddeford, Maine vape shop, exhales vapor while using an e-cigarette.

Once seen as a cutting-edge nicotine alternative to cigarettes, recent cases of illnesses and deaths associated with e-cigarette products have called into question the safety of vaping materials.

Illinois was the first state to report a death associated with vaping on Aug. 23, and the Illinois Department of Public Health (IDPH) is investigating 69 cases of respiratory illness linked to vaping. The CDC announced Thursday that more than 500 people were experiencing vaping-related lung illnesses nationwide. Missouri health officials also announced Thursday that a 40-year-old man died from respiratory problems associated with vaping, the eighth such death nationwide.

Vaping devices typically heat a nicotine solution, which creates a vapor that is inhaled by users. But pens containing THC, the main psychoactive agent in marijuana and CBD oil are also attracting scrutiny. Additionally, officials are warning of the prevalence flavored e-cigarettes and vaping products, which were banned in Michigan and New York last week.

While the CDC said it was unable to link a specific product or device to all of the cases, they reported that most affected individuals used vapes containing a form of cannabinoid oil — products that are largely unregulated unless found at medical dispensaries.

The IDPH is urging the public to discontinue vaping altogether. Ngozi Ezike, director of IDPH, told The DePaulia her department is continuing to investigate the recent outbreak of vaping-related illnesses.

“Patients in Illinois have reported using about a dozen different products and devices, including cannabinoid products such as THC or CBD, making it difficult to decipher which product(s) or devices(s) are causing respiratory illness,” Ezike said via email. “It is important to remember that vaping carries inherent dangers for youth as most products contain nicotine, which harms the developing brain and can lead to addiction.”

One student, who wished to remain anonymous because of laws regarding recreational cannabinoid usage, began using a THC pen in December. They said that while these devices are addictive, the problem lies in unregulated products bought off the street, which people are drawn to amid as the government makes it harder to legally obtain them.

“A lot of actual vaping, such as Juuls or those really big vapes that look like batteries, and the dab pen carts that are hurting people, are the ones from the black market,” they said.

On Friday, attorneys for an Illinois teenager sued e-cigarette maker Juul, alleging the company targeted underage consumers through its social media and advertising practices. The plaintiff, 18-year-old Adam Hergenreder, suffered a lung illness after vaping for over a year. Juul controls roughly 75 percent of the e-cigarette market.

Some dispensaries are trying to reassure their customers about vape products. MOCA, a Chicago-based medical cannabis dispensary, released a statement Sept. 13 asserting its vape products are safe to use.

“Most reports seem to focus on black market THC vape cartridges and e-cigarette products and, more specifically, various additives used in these products,” the statement said. “Vitamin E, propylene glycol and others are the most commonly cited additives and are believed to be at the root of the problems.”

James Mourey, a marketing professor at DePaul, said a major contributor to the popularity of vaping in recent years has been the tactic of marketing vape products as healthier alternatives to cigarettes.

“The problem is exacerbated for teens who, motivated to find an alternative to smoking if they paid attention in D.A.R.E., see a sleek, trendy, electronic gadget, which is something that age group is already more interested in anyway,” Mourey said, referring to the Drug Abuse Resistance Education Program.

Leonard Jason, a community psychology professor at DePaul specializing in smoking habits for nearly 45 years, said cannabinoid products being sold on the street can be especially dangerous.

Fears surrounding these illnesses may not last among users. Mourey said consumers can get used to warning messages, lessening their impact.

“It’s like being frightened by a scary movie the first time you see it and maybe the second time, but by the millionth time you’ve seen it, it just doesn’t have the same scary effect,” Mourey said. “What regulators do, then, is figure out a new way to warn or scare people. This is again effective, at first, but then people habituate to this new approach as well.”

Orlando Owens, DePaul senior, began vaping at age 18 when it was legal in Cook County and still uses a nicotine vape at least once a day. He said one of the biggest misconceptions about these devices is that they aid in quitting smoking.

“In fact, I believe vaping was the starting point for most of the kids in this generation,” Owens said.

Danielle Park, a DePaul junior, said she originally quit smoking cigarettes, but got back into a nicotine addiction from vaping.

“I still enjoyed nicotine and it was more convenient than having to go outside to smoke cigarettes,” Park said. “I think the misconception is that vaping is a good step to take if you’re trying to quit smoking. If anything, it’ll worsen the addiction because it’s more convenient and accessible than cigarettes.”

The University of Michigan’s annual Monitoring the Future study, which examines substance use among young people and adults, found the number of college-aged students who vaped nicotine within the last 30 days jumped from 6.1 percent in 2017 to 15.5 percent in 2018; for marijuana vaping, the number increased to 10.9 percent in 2018 compared to 5.2 percent the previous year.

Despite this widespread usage, many students interviewed by The DePaulia declined to go on record about their vaping habits —  a trend Mourey said is understandable.

“Headlines for the past three weeks have been about how awful vaping actually is, how some young kid now has ‘the lungs of a 70-year-old’ and how consumers have been deceived,” Mourey said. “Nobody wants to admit that they have been duped or discuss the risky health behaviors to which they have exposed themselves, particularly if they’re still doing it.”