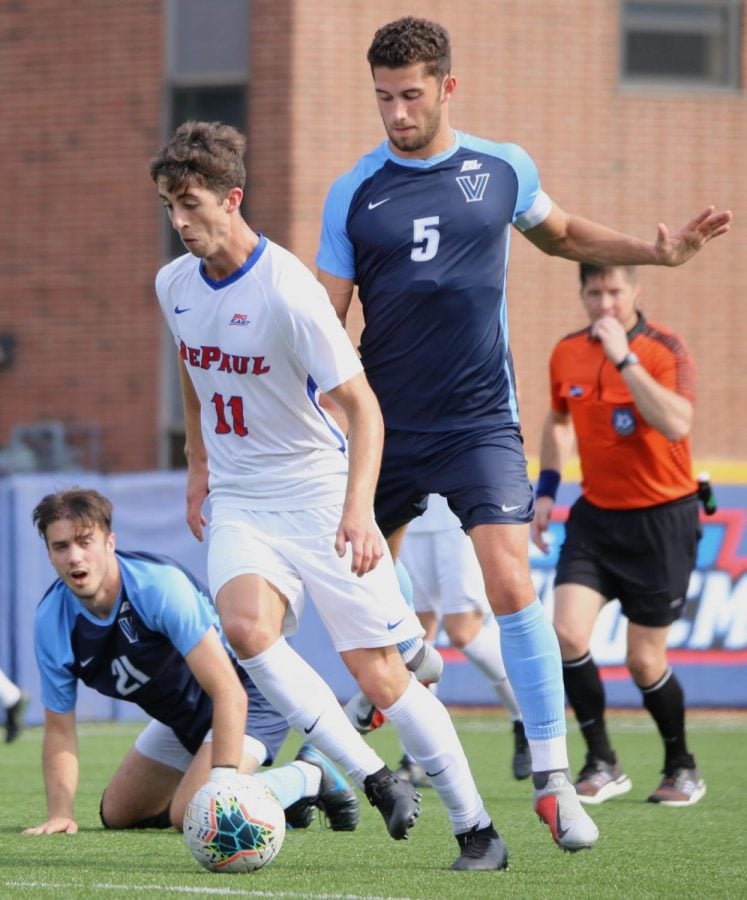 The men’s soccer team has reached a midpoint in their season. It’s a real “prove it” time for the Blue Demons as they are moving further into the season and putting the non-conference schedule in the rearview.

Looking into the mirror and assessing where they stand is critical for head coach Mark Plotkin’s squad, who stand at 3-3-1 after a 0-0 draw with Villanova to open Big East play.

Winless in their last three games, the team is still searching for an identity. Two losses last week against Loyola University and the University of Illinois Chicago lead to eight goals conceded for the team. Despite the two outlier games, the defense has shown that they can hold up nicely. Friday, lead by acrobatic saves by goalkeeper Drew Nuelle, the team got their third clean sheet of the season.

The shift in pace in the season is notable. The Big East is an improved conference this year, including No. 3 in the country Georgetown. Neither Villanova or DePaul made it to the Big East tournament last season, and both were picked by coaches in the preseason poll to repeat that this season.

“We both want to win. They got some great guys and so do we,” forward Jack Richards said. “We feel like we’re a better team and that we can get above them in the table.”

Although when the noise is tuned out, all the teams can do is battle for 90 minutes and play the best game they can play.

Plotkin says DePaul realizes the strength of the Big East, and they know about their preseason predictions. But the necessary confidence is still there, and the team has the personnel to get things done.

“There’s a lot of great teams in the Big East this year,” Nuelle said. “I know that we are just as good as most of them if not all of them. What is going to separate us and what is going to get us wins is pushing through the 90 minutes.”

The Blue Demons are going through some roster shuffles too. The team will be missing freshman forward David Gripman who suffered a torn ACL on Sept. 9 against Drake. Against Villanova, they were without starting midfielder Jacob Seeto who was suspended after a red card against UIC in the prior game.

“Depth wise we don’t have all the guys we needed out there,” head coach Mark Plotkin said. “I am proud of the guys for hanging on and playing way more minutes than they probably should have been.”

Finding out what works and figuring out the team’s niches is the tall task for everyone. If there is a time to get rolling though, the time is now.

“The season is long. Even though time-wise it’s not we have a lot of games,” Nuelle said. “So I think we got back into a rhythm where we are focusing more on defense because I feel like we lacked that in the last two games.”

Perhaps the biggest positive about the team is their character. The team proved against Loyola on Sept. 13 that they are never out of a game after coming back from a 3-0 deficit to make the game more challenging.

And on Friday the team dug through the full 90 minutes as well as tacking on two overtime periods. Despite tons of pressure from Villanova’s offense, the Blue Demons stayed strong in the September heat.

The defense has made a key effort to disrupt opponents’ shots and keep quality chances down. This includes setting up well against set pieces and keeping passing lanes tight. In a couple games, adjustments at second half have shown the team’s ability to recognize what improvements they need.

Another thing coach Plotkin is stressing is the little things, the details that even if minute, cannot be overlooked.

“[We’re] making sure that we are sharp defensively and cleaner on the ball to give ourselves a lot more opportunities to score,” Plotkin said.

In order to prove preseason predictions wrong and carve out a spot in the Big East tournament, the team has to assess what they have done well this season and fix where they have come up short.