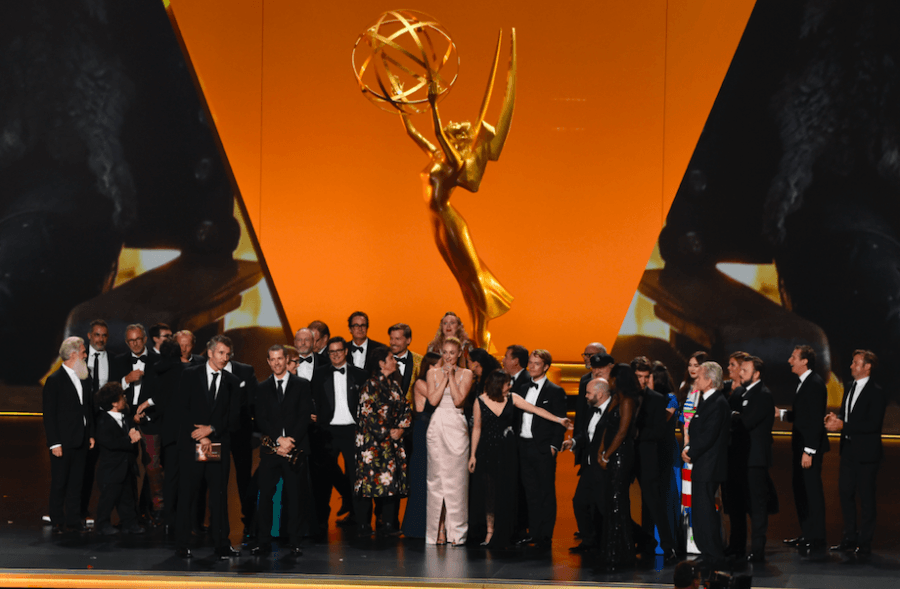 The 71st Emmys took place Sunday night as the biggest and brightest stars pulled up to the purple carpet to celebrate television and all it has to offer. This year’s ceremony saw a mix of awards given out to a great number of shows. The big winners of the night were “Fleabag,” “The Marvelous Mrs. Maisel” and “Game of Thrones.”

The night started with a flurry of bits about how the show did not have a host. This was the fourth time in the seven-decade history of the show that they went hostless. First, Homer Simpson came out as an animation until Anthony Anderson ran around the stage to find Bryan Cranston, who differed to Ben Stiller. Having no host meant that the Academy of Television Arts and Sciences had to find a way to replace the opening monologue; they kind of just had everyone run around the stage.

The first award was for Outstanding Supporting Actor in a Comedy Series and it was won by Tony Shalhoub for his role in “The Marvelous Mrs. Maisel.” That was the first of two acting awards for the show, with Best Supporting Actress going to Alex Borstein.

Along with “Mrs. Maisel,” comedy had two other big winners of the night with “Fleabag” and “Barry.” British dramedy “Fleabag” won four awards of the night. The show was nominated for four and won all of them, including Writing for a Comedy Series, Directing, Lead Actress and the overall award for Outstanding Comedy Series.

HBO’s Bill Hader-led “Barry” had nine nominations on the night. The lone win went to Hader for Lead Actor in a Comedy Series. “Barry”’s third season premieres in Spring 2020. This is Hader’s second year in a row taking that award.

In drama, there were a wide variety of winners. In the eight genre-specific categories, six different shows won. “Game of Thrones” took home the top prize of the night in the category of Outstanding Drama Series, and the series’ Peter Dinklage won the supporting actor award as well. “Ozark” also took home two trophies, as Julia Garner won the supporting actress award and Jason Bateman won for directing.

Perhaps the biggest and most historic win was captured by Billy Porter. The “Pose” actor is the first openly gay man to win a lead actor Emmy. His speech did his win justice as he proclaimed, “The category is love, y’all!”

Another interesting thing was going on with the show. In the two biggest awards, Outstanding Drama/Comedy Series, only two of the shows run on a traditional network. With the rise of premium TV and streaming services, the days of the classic network shows are coming to an end. “The Good Place” (NBC) and “This is Us” (NBC) were the lone outsiders.

The fall TV season used to be a bigger ordeal. The format of shows beginning in late September and following a basic schedule seems to be a way of the past. Streaming services mean people can watch and discuss full seasons in a matter of days instead of a matter of months. With the exception of reality TV like “The Bachelor,” live TV is being saved for sports.

As far as the actual broadcast of the awards show went, it was lackluster. The camaraderie of the Emmys, Oscars and Grammys has been deteriorating for years. Awards shows are long and drawn out. Yet, it was not length that was the issue with Sunday night’s broadcast – it was the content. The show lasted three hours and ran tight. But the jokes seemed to be dry, the music choices kind of strange and the PA announcer had not-so-interesting factoids on award winners.

Did we really need to know that Jason Bateman is a yoga master?