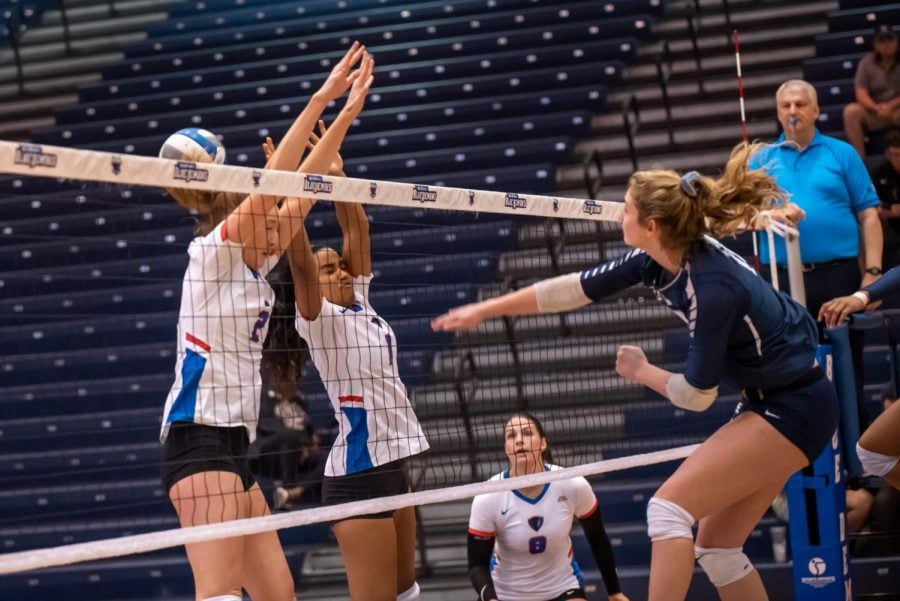 DePaul senior Brittany Maxwell goes up for a hit against Seton Hall on Saturday at McGrath-Phillips Arena. The Blue Demons won the match in four sets.

The Blue Demons were ready to get right back on the court after losing all three matches in the Chicago Cup last weekend. They got the chance to do so with an encounter against the Xavier Musketeers on Wednesday night, but dropped their first conference game in 2019 in five sets.

In the first set, DePaul led by as many as four, but Xavier would take six of the last eight points and win the first set by two. The second set turned out different. This time, the Musketeers had a five-point lead late in the set.

The Blue Demons would grab 10 out of the last 12 points and win the set 25-22. This rally was spurred on by three straight kills by Emma Price, who also registered a block on set point, and two blocks from Claire Anderson.

In the third set, DePaul carried over their momentum early and got out to an 8-3 lead, thanks in part to two blocks and a kill from Avarie Evans-Allen. The Blue Demons did not surrender the lead for the rest of the set and had a 2-1 lead going into the fourth.

This set was tight throughout and no one had a significant advantage until Xavier went on a 5-0 run to lead 21-16. The Musketeers kept the Blue Demons at bay and won the fourth set by two to take the match to a deciding set.

“These players haven’t been in highly pressurized situations; this year, we are in a lot of the matches,” coach Marie Zidek said, explaining the difference from the year prior. “We need to learn how to handle pressure a little bit better, playing how you practice, and we will get there.”

Xavier was able to jump out to a five-point lead on multiple occasions and had four match points at 14-10. DePaul was able to tie the match up at 14 on service error from the Musketeers and a kill from Brittany Maxwell, Donna Brown and Anderson, respectively. However, the comeback came up just short, as Xavier was able to win the next two points to win by three sets to DePaul’s two.

Maxwell finished the match with a team high 24 kills and was her second-highest output thus far this season. Natalie Hayward had 39 assists, which crushed her previous highest on the season. Isabelle Banez recorded 37 digs to go along with six assists.

“We competed really well, there were a lot of people really getting after it,” Zidek said after the loss. “I said it before the season that we are going to be in 12-15 five-setters this year. We are going to do the long haul and grind these out, so this is a great competitive experience.”

“We have seen every loss as an opportunity to learn and those tight moments in conference, and it is going to depend on if we are in the tournament or not,” Anderson said after the tight five-setter. “We take everything that we can and knowing how hard we fought, we can continue to grow, and that is what this season is all about.”

“My job is making my hitters look good,” Hayward said when asked what her role was. “Whatever hitters I am given, it is my job to make their jobs easier as well, so that is what I am focused on.”

DePaul returns to McGrath Phillips Arena on Friday to take on St John’s, then has a quick turnaround, facing Seton Hall on Saturday.