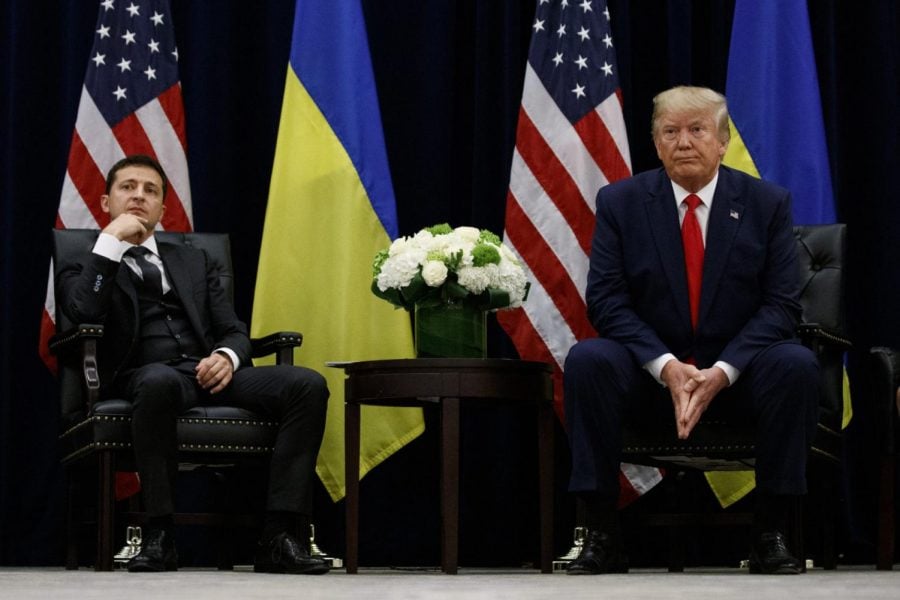 The fallout continued over the weekend from a phone call between President Donald Trump and Ukrainian president Volodymr Zelenskiy, which led Democrats to launch an impeachment inquiry into the American president Wednesday.

On Friday three different house committees subpoenaed Secretary of State Mike Pompeo for documents related to Ukraine. Also, special envoy to Ukraine Kurt Volker was confirmed to have resigned by the student newspaper of Arizona State University; Volker was named in a whistleblower complaint as having met with Ukrainian officials a day after the call to give “advice to the Ukrainian leadership about how to ‘navigate’ the demands that the president had made of Mr. Zelenskiy.”

The July 25 phone call led to the whistleblower complaint, filed Aug. 12 by an unnamed individual later reported by the New York Times to be a CIA officer. The complaint was deemed credible by the Inspector General of the Intelligence Community, Michael Atkinson.

A partially declassified copy of the whistleblower complaint was released by the House Intel Committee Thursday morning. In it, the whistleblower cites conversations with “more than half a dozen U.S. officials” suggesting “the President of the United States is using the power of his office to solicit interference from a foreign country in the 2020 U.S. election.” The whistleblower says that they were not directly present during the incidents cited in the complaint.

A key allegation from the complaint is that senior White House officials stored records related to the call in a “separate electronic system that is otherwise used to store and handle classified information of an especially sensitive nature.”

“This set of actions underscored to me that White House officials understood the gravity of what had transpired in the call,” the whistleblower wrote in the complaint.

In the call, Trump congratulates Zelenskiy on his election victory and asks Zelenskiy to look into American cybersecurity film Crowdstrike — which investigated Russian meddling in the 2016 U.S. presidential election on behalf of the Democratic National Committee — and former Vice President Joe Biden’s son Hunter, who was on the board of directors for Ukraine-based energy company Burisma Holdings. Burisma is the subject of a corruption investigation by Ukrainian authorities, though the Ukrainian government’s anti-corruption agency said the scope of their investigation involved a period of time before Biden joined the company.

Ukraine relies heavily on U.S. military aid. Trump ordered a planned $400 million military aid package to be held off about a week before the call with Zelenskiy, which Democrats say could be evidence of quid pro quo.

“There’s a lot of talk about Biden’s son, that Biden stopped the prosecution and a lot of people want to find out about that so whatever you can do with the Attorney General would be great,” Trump told Zelenskiy, according to the unclassified memo of the phone conversation released by the White House Wednesday. “Biden went around bragging that he stopped the prosecution so if you can look into it… It sounds horrible to me.”

In the call, Trump also told Zelenskiy to speak about the matter with his personal attorney Rudy Giuliani and Attorney General William Barr.

“The president’s personal lawyer … is a central figure in this effort,” the complaint states. “Attorney General Barr appears to be involved as well.”

Democrats are calling the phone call a “shakedown,” while most Republicans argue there is no evidence of quid pro quo.

At the U.N. General Assembly in New York on Wednesday, Zelenskiy shared the stage with Trump and said he didn’t want to be involved in the U.S. presidential race. “We had, I think, a good phone call,” he told reporters. “It was normal, we spoke about many things … I think, and you read it, that nobody pushed me.”

“In other words,” Trump added as cameras snapped away, “no pressure.”

Zelenskiy, for whom fighting political corruption was a key platform of his presidential campaign, faces only a “minor risk” of having his reputation tarnished, according to Jordan Gans-Morse, an associate professor of political science at Northwestern University who has studied political corruption in the former Soviet Union. “It’s unfortunate that Zelenskiy appears in the transcripts to agree to pursuing the investigations Trump requests,” he said.

“It’s also unfortunate that he felt compelled to emphasize that he previously had stayed in Trump hotels. But a reasonable person could assume that Zelenskiy was working off a well-known playbook that many foreign leaders have found to be effective with Trump: flatter as much as possible, avoid arguments whenever possible.”

On Capitol Hill Thursday, Zelenskiy was no longer the primary focus, as Acting Director of National Intelligence Joseph Maguire testified before the House Intelligence Committee.

During the more than three-and-a-half hour hearing, Chairman Adam Schiff, D-CA, and other Democrats accused Maguire of keeping the contents of the whistleblower complaint from Congress; Maguire repeatedly responded that the complaint was “unprecedented” because to his knowledge, no other complaint had ever dealt with a phone call between a president and a foreign leader, making it subject to executive privilege. He said that, in his efforts to follow the law, he consulted with the White House Counsel’s office and the DOJ’s Office of Special Counsel before forwarding the complaint to the House and Senate intelligence committees, which the Intelligence Community Whistleblower Protection Act says should be done within seven days of receiving it.

Republicans largely cast doubt on the veracity of the whistleblower complaint and accused Democrats of trying to assail the honor of Maguire, a 36-year Navy veteran.

Trump has repeatedly assailed the credibility of the whistleblower, calling them “highly partisan” on Twitter.

Behind closed doors Thursday, Trump stood before members of the U.S. Mission to the United Nations and said whoever gave the whistleblower information is “a spy.”

“You know what we used to do in the old days when we were smart with spies and treason, right?” he asked. “We used to handle it a little differently than we do now.” Audio of Trump’s comments was obtained by the Los Angeles Times, and Bloomberg News later published video.

DePaul student Jairus Castaneda said in terms of the Democrats’ decision to open an impeachment inquiry, “The government is two steps behind the public consensus, but at least they’re listening.”

In Millennium Park, Carlos Gomez said he agreed with the Democrats’ decision to open an impeachment inquiry, and he believes the government has lost credibility.

“It’s about time that they actually go through with this impeachment,” he said.

Nationally, a poll conducted by NPR, PBS NewsHour and Marist on Sept. 25 found that only six percent of Republicans approved of the House of Representatives formally starting an impeachment inquiry into President Trump, while 88 percent of Democrats approved.

It’s unclear if Democrats would be able to secure the two-thirds majority they would need in the Senate to oust the president, assuming the House moves forward with Articles of Impeachment.