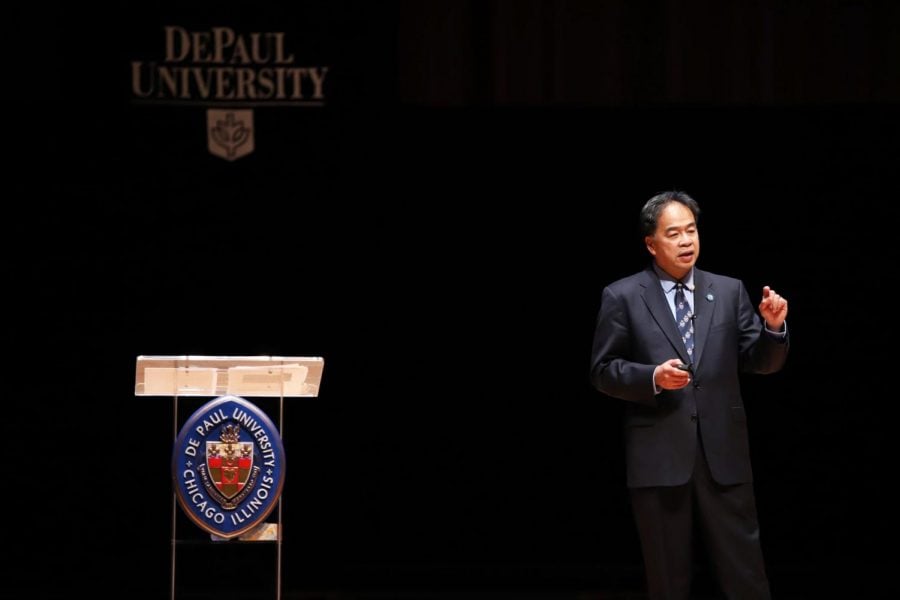 President A. Gabriel Esteban addresses faculty, staff and administrators at the annual State of the University speech.

DePaul’s enrollment has experienced an eight-year decline – and while President A. Gabriel Esteban stresses that he isn’t worried, he also stresses urgency.

Esteban addressed faculty and staff this past Thursday, Oct. 3, at the Holtschneider Auditorium, discussing DePaul’s “Grounded in Mission” Plan for 2024, achievements in the 2018-2019 academic year and challenges facing the university – specifically, declining enrollment rates and its effect on revenue and academic climate.

Esteban opened with his goal for DePaul to be one of the Top 50 universities, Top 10 private, Pell-aid awarded universities and top five Catholic universities by 2030.

These goals are attainable, he said, pointing to DePaul’s successes in the past year, including eight DePaul students and alumni receiving Fulbright scholarships, the new Grace School of Applied Diplomacy and a recent $6.6 million NIH grant to DePaul faculty researching violence prevention curriculum in CPS.

“We have the faculty, we have the students,” he said. “That’s why DePaul has a distinct advantage moving forward.”

Challenging this progress is DePaul’s eight-year decline in enrollment. Since a peak in 2010, DePaul’s population has declined by 3,334 students, according to a PowerPoint presentation by the provost and vice president of the university on Sept. 20.

DePaul’s enrollment is concerning in reference to national trends in higher education. Though national enrollment has decreased by 1.7 percent, according to the NCS Research Center, 88 of 180 private, not-for-profit, doctoral institutions had an enrollment increase of 10 percent or more, and 127 of 180 experienced stable or positive enrollment growth in the past year, Esteban said.

Declining birth rates in the 2000s are a general concern for higher education. In 2026, Esteban said, there will be a sharp decline in 18-year-olds. And of the 18-year-olds, less are attending universities, with a projected 18 percent decline in Illinois high school graduates by 2029.

Despite these trends, DePaul has the largest freshman class in its history this year, with 2,627 students.

With this, DePaul has seen an increase in diversity, with students of color making up 44 percent of the new freshman class, as well as first generation students making up 33 percent and out-of-state students 38 percent, according to Esteban’s powerpoint.

These numbers indicate a diversifying campus, but audience members expressed concern with a recent climate survey that showed  diminishing feelings of diversity in DePaul’s academic climate amongst faculty and staff, according to Quinettta Shelby, an associate professor of inorganic chemistry.

“There are declines in the perceived environment that favor diversity,” she said, “And I wonder if we’re seeing a decline in our enrollment because of the climate that the faculty and staff are experiencing. I think that probably is felt by the students.”

Esteban emphasized the importance of faculty themselves reaching out to colleagues of color when job openings arise.

“One thing to keep in mind, I have no say,” he said in regard to faculty hiring. “You’re the ones who know the openings.”

Alongside declines in enrollment, DePaul has seen a decrease in revenue, down $7 million from last year, as previously reported by the DePaulia. Esteban noted a steady increase in DePaul’s net revenue from 2003 to 2017 is due to tuition increases rather than enrollment growth

Faculty and staff expressed concern about the continuation of gaps and lack of communication between departments as revenue continues to decline.

“As we grew over the years, the university got bigger, we created more departments and those departments had more people,” said Tyneka Harris, project leader for the academic support team and information services. “But then we had cuts into those departments and we now have these ‘silos’ that are kind of like little islands —  we’re trying to do more with less and there’s no one really coming to try and help us work together.”

A focus on standardizing and increasing communication between faculties will be critical if enrollment and revenue continue to fall.

“It’s not necessarily asking for more staff; it’s really more about how we’re going to be more efficient with the staff that we have,” Harris said.

In his plan to increase enrollment, Esteban proposed a continued investment in DePaul’s Catholic mission, including scholarship initiatives like Generation Success, a program dedicated to supporting first generation students, and the Chicago Promise Scholarship, which currently provides scholarships to 299 high-achieving CPS graduates.

He also suggested an investment in academic programs, like the Grace School of Applied Diplomacy, which he expects will increase enrollment.

“We’re the first school of its kind,” he said. “So we expect this to be able to help recruit students.”

With these investments, he hopes to further create a distinctly “DePaul” experience, emphasizing events like the tree lighting and midnight breakfast. He also hopes to increase engagement with alumni and friends and expand outreach to Chicago and Chicago communities.

“The thing about what must be done, is that it had to be done yesterday,” Esteban said. “There needs to be a sense of urgency among us.”