The Father, the Son and the Holy School Spirit 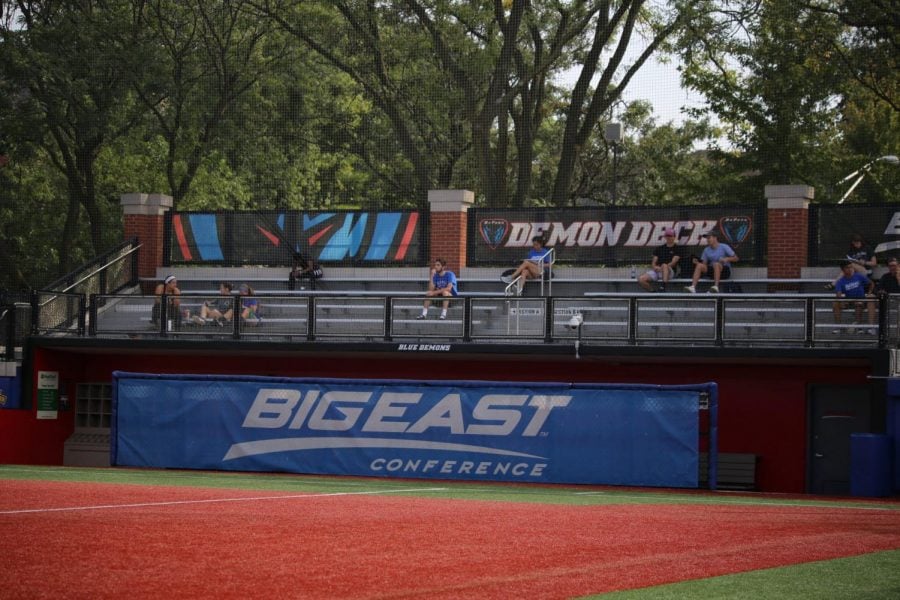 As DePaul fights the national decline and its own in student enrollment, they are turning to school spirit to boost retention and increase affinity for the university among students.

This year, the university committed an additional $240,000 to its budget to fund at least eight large-scale affinity events, according to DePaul spokeswoman Carol Hughes. A newly formed student organization, the DePaul Traditions Council, is in charge of putting on these events. The money also funded a convocation for all new students on Sept. 10, Hughes said.

“There’s ebbs and flows [of school spirit] throughout the school year,” said Courtney James, director of the Office of Student Involvement. “There’s a natural excitement and enthusiasm in first weeks of class that we don’t need to mirror during finals time. We’re not looking to do something like ‘Welcome Week’ every week. We want to create peak experiences where students can connect and create a DePaul memory.”

Research shows that small amounts of peak happiness pay off in the long run, as opposed to doing the same thing for an extended period of time, she said. Some events the Office of Student Involvement put on last year, like an ugly sweaters event and the annual midnight breakfast, are intended to work in this domain.

Another way the university is working to boost student affinity is through clubs like the DePaul Activities Board, whose primary goal is to put together events which bring the student body together.

“We have a lot of organizations and each one has its own goal, its own characteristics,” said Nathalia Levy, a student worker in the Office of Student Involvement and president of DAB. “It’s hard to get students involved at first, but once they’re involved, then they see the benefit in that. I think as a whole, involvement isn’t really high in comparison to other schools, lots of it because it’s a city school, but I think in more recent years, we’ve been increasingly doing a better job than before.”

She added that there is affinity within the student organizations, as many of them share the same goal to get as many students as possible to their events.

“For bigger events like FEST and DemonJam, we want to make those events into an experience for every student at DePaul, so that when a 2016 graduate talks with a freshman in 2018, they can say, ‘Oh, did you go to your FEST? Who was your artist?’ and bond over their shared DePaul experience,” Levy said.

James said that one of the groups the university is focusing on increasing school affinity among is e-sports.

She explained that a survey found that 47 percent of students engaged in e-sports are not involved in traditional student activities. Using a rough number of 1,000 e-sports participants at DePaul, then, she said that would mean that there are 470 students potentially not engaging. The Office of Student Involvement is working with them to connect their love for e-sports to the university in a meaningful way.

But while the spirit may be willing, the flesh is weak, and the lack of student affinity goes beyond those who participate in e-sports. In a survey of 32 students across different disciplines and years, The DePaulia found that 46.9 percent of students said they do not care about school spirit, whereas 25 percent said they do care and 28.1 said they sometimes care.

When asked what they feel the university does poorly and could improve upon in relation to school spirit, many pointed to a lack of a connected campus and student body.

“‘The city is your campus’ is a cheeky way to downplay our lack of campus personality,” said Noah Sallen, a fourth-year student at DePaul. “Despite the ubiquity of DP advertising I see everywhere I go, I believe the best way to bring ethos to our city presence is to market our sports accomplishments better.”

James said that in order to increase spirit among the student body, she thinks it’s important that students engage in the university’s initiatives surrounding affinity.

“Even the low-level things we do, like wearing blue on Thursdays — we do this because the end goal is to leave [DePaul] and have a sense of connection and ties to the university because of the strength of relationships due to the things [students] went to,” she said. “As alumni engage, they consider sending their kids here, not just because it’s academically rigorous, but because they feel a sense of connection to the things that took place when they went here.”