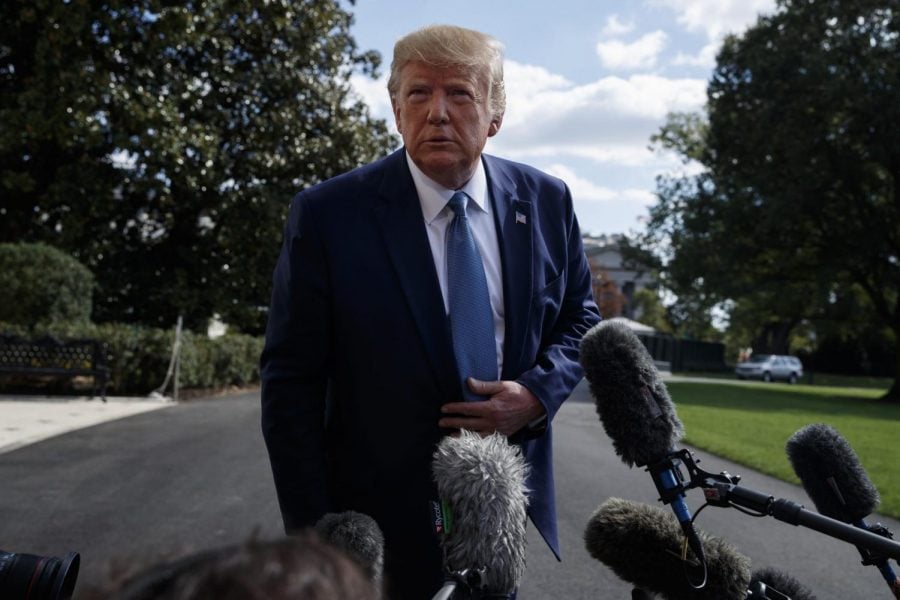 President Donald Trump talks to reporters on the South Lawn of the White House, Friday, Oct. 4, 2019, in Washington.

The Democratically-controlled House of Representatives continued the impeachment inquiry this week into a whistleblower’s allegation that President Donald Trump asked the President of Ukraine to investigate Trump’s political rivals. Here’s a quick rundown of what happened.

SUNDAY, Sept. 29 — Trump tweeted that he wanted to meet the whistleblower.

MONDAY, Sept. 30 — Trump called out House Intelligence Committee Chairman Adam Schiff for paraphrasing him at a House Intelligence Committee hearing, saying Schiff “made up” his words; Senate majority leader Mitch McConnell, a staunch ally of the president, said he would have no choice under Senate rules but to take up Articles of Impeachment if they pass in the House; Trump tweeted remarks from a Texas Baptist minister who warned of “a Civil War-like fracture in America,” if Trump is impeached which lead to criticism from Illinois Republican Adam Kinzinger calling the comments “beyond repugnant”; White House officials speaking on condition of anonymity said Secretary of State Mike Pompeo was on the phone call between Trump and Zelenskiy; Trump’s lawyer Rudy Giuliani, who was also named in the whistleblower complaint, was subpoenaed along with three of his associates by three different House committees.

TUESDAY, Oct. 1 — The Justice Department said it sought help from Australia to investigate the origins of the Russia probe; in a letter to the House Foreign Affairs Committee, Pompeo wrote that Democrats are trying to “intimidate and bully” State Department employees; Zelenskiy said he never met Giuliani and no one ever explained to him why millions of dollars in U.S. military aid were delayed.

WEDNESDAY, Oct. 2 — Trump tweeted that he is the subject of a coup attempt; Pompeo confirmed that he was on the call between Trump and Zelenskiy and said that it was fully consistent with U.S. policy; Joe Biden directly addresses Trump’s accusations against him at a gun safety forum in Nevada, saying, “I’m not going anywhere.”

THURSDAY, Oct. 3 — Trump told reporters that Beijing should look at investments made by Joe Biden’s son Hunter; three House committees released text messages between former U.S. ambassador to Ukraine Kurt Volker and other diplomats discussing setting up a meeting between Trump and Zelenskiy and investigating the Biden family on behalf of the president

SUNDAY, Oct. 6 — A second whistleblower with “first-hand knowledge of key events” came forward and said they could corroborate details of the first whistleblower complaint, according to the attorney who represents both whistleblowers.