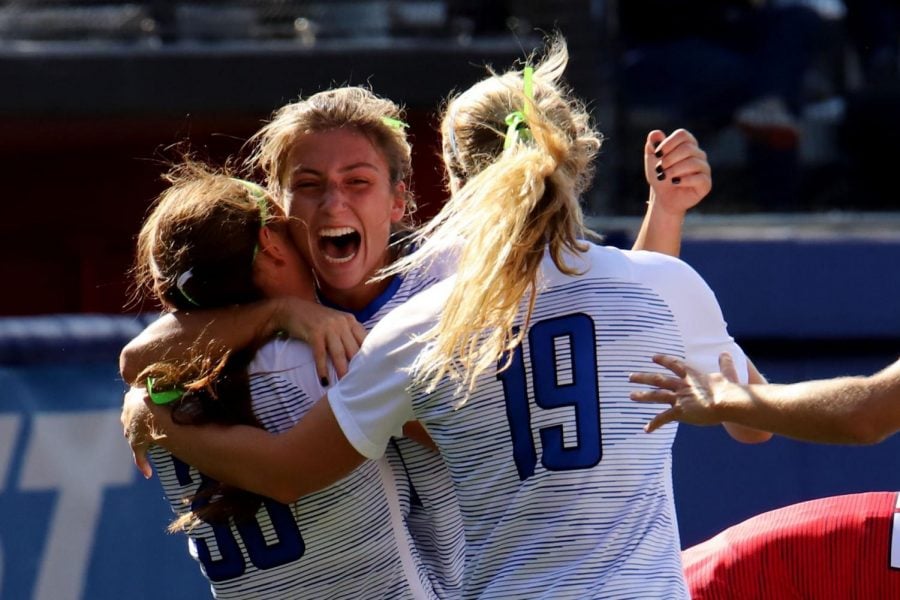 DePaul junior midfielder Bina Saipi celebrates with her teamamtes after scoring a goal against St. John’s at Wish Field on Sunday. The Blue Demons won the game 2-0.

Morgan Turner found the back of the net in the first half and Bina Saipi headed a ball in during the second half en route to a 2-0 Big East win against St. Johns on Sunday.

DePaul (5-5-2) hosted St. Johns (4-8) on a beautiful weather day at Wish Field. The Blue Demons were coming off a 2-1 win against Butler on Thursday. Both teams were hoping to win their second-straight, as St. John’s beat Seton Hall in New York on Thursday.

The game was in favor of the Blue Demons. DePaul’s defense kept St. John’s to only six shots all day, with five shots on goal saved by goalkeeper Mollie Eriksson. The defense was able to relieve the rare pressure the Red Storms applied. In the first half, the Blue Demons’ offense produced plenty of chances, forcing St. John’s goalkeeper, Meredith Reinhardt, to make six saves.

Halfway through the first half, a DePaul chance went from an opportunity to a finish as Morgan Turner turned and got it past Reinhardt to open up the scoring.

“The ball popped out and Maria [Nordness] played a nice ball to me in the top of the box and I was able to turn and shoot,” Turner said.

It was the opening goal in the game as well as Turner’s fifth of the season, the top mark on the team. Turner and DePaul’s offense have been able to take off recently.

“I think that we have a lot of players contributing and we’ve been playing really well together as a whole,” Turner said. “Especially in the last few games, our midfield and attacking players have been able to provide a lot.”

The Turner goal was one of many good looks in the first half as DePaul poured on 10 shots in the first 45 minutes. Going in, they knew they had the ability to create those looks and sharpen up their offensive attack.

“I think we were disciplined with our pressure, so I think that was super important and one of our goals for the game,” head coach Erin Chastain said. “And I thought we did a good job of that. There were a lot of good opportunities to score.”

Going into the second half with a lead could have led to the Blue Demons slowing down their approach, but that was hardly the case. They added six shots and held on defense when necessary.

Twenty minutes into the second half, the Blue Demons found even more comfort. Jackie Batliner had the ball and some space to fire a high cross into the box that found the head of Saipi, who put it past the St. John’s defense. The Blue Demons would hold that 2-0 result.

“Serving the ball into the box is always a dangerous opportunity,” Batliner said. “So whenever we can do that we like to. A lot of communication and fight has allowed us to do that.”

Despite a slower start at home during non-conference play, Wish Field has been a place for success in Big East play. The Blue Demons are now 2-0 at home in conference action.

“We had struggled in the non-conference at home,” Chastain said. “So I think it’s nice to see the energy we’ve been bringing and the commitment to kind of how we want to play at home.”

That comfort showed today as the Blue Demons controlled the game.

“We had a lot of fans today, so they definitely brought the energy and hyped us up,” Batliner said. “I think we always want to defend our home field so everyone brought their best.”

The Blue Demons will travel for their next two games. They will play Providence on Thursday and Villanova on Sunday.