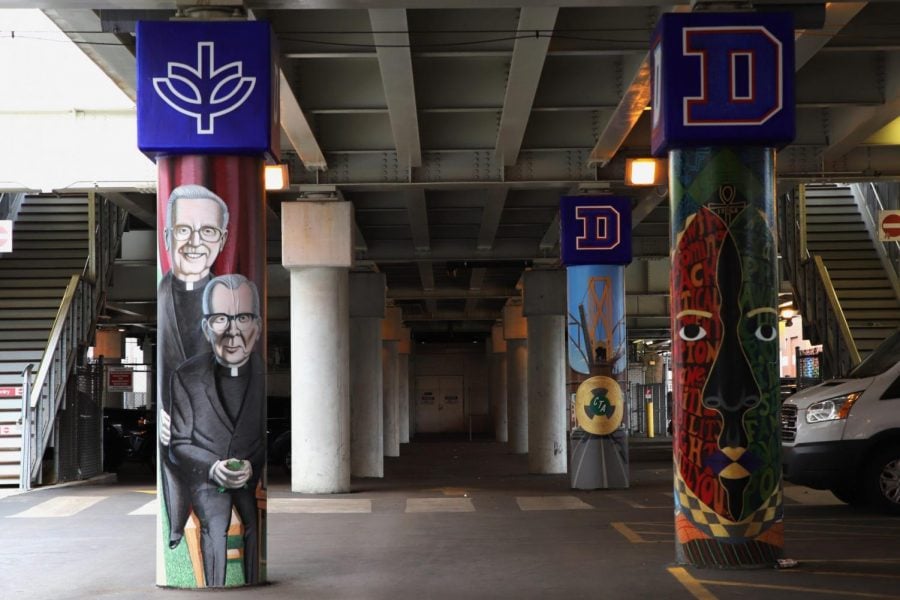 The new murals make 17 of what will eventually be 25 installations that explore different time periods and important figures related to DePaul.

As Red, Brown and Purple Line trains rattled past the Fullerton ‘L’ stop on Oct 4, four new murals intended to celebrate the university’s history were unveiled under the tracks.

The new pillars make 17 completed murals on the pillars under the track of what will eventually be 25 murals created by Brother Mark Elder, an adjunct faculty member in the art, media and design department.

The first mural honors former university presidents John Cortelyou and John Richardson for their contributions to the university, particularly pertaining to its green space. Father Hugh O’Donnell dedicated the pillar, giving background into each of the presidents’ careers and dedication to DePaul.

The pillar features Cortelyou holding a frog, which Elder explained was in honor of Cortelyou’s love for the sciences. When he taught at the university before becoming president, Cortelyou was known to invite students to his lab to encourage them to pursue science; there, he always gave them a toy frog.

To dedicate the second pillar, Elder invited Ron Caltabiano, dean of the music school, to speak— but first, he played the university’s fight song for the group. The adults in the room sang along, and the students in the room looked at each other, confused, perhaps not realizing that the university even has a fight song. Elder said this is precisely why the second mural features some lyrics from the song, along with its composer, Arthur C. Becker, who many describe as the founding dean of the university.

Caltabiano explained to the group that Becker expanded the university’s music department immensely throughout his time as dean, gaining the school accreditation, expanding its curriculum and changing its name from a “school” to a “college.”

The third pillar honors the CTA’s relationship with the university. Maria-Teresa Roman, a liaison with the CTA government community relations department, was invited to speak to their commitment.

“[The CTA’s] mission isn’t just to move people from one place to another, but also to create opportunities to inspire, educate and explore Chicago,” she said. “Our relationship with DePaul is one we are proud of. It’s an honor to be a part of this collection, and we at CTA take it very seriously.”

To induct the fourth pillar, which is a tribute to the university’s 1979 basketball team, Elder said he “was promised” by the athletic department that Jean Lenti Ponsetto, the athletics director, would give the introduction, but because no representatives from the department showed up, Elder gave the presentation himself.

The fourth pillar, Elder explained, is intended to honor how the 1979 team changed the university’s culture and got the students involved with the school like never before. He cited Loyola’s recent underdog Final Four appearance in the NCAA Division I men’s basketball season, and said that the 1979 team created a similar environment. The pillar itself depicts an abstracted baseball net, which looks like a flower to symbolize that DePaul “blossomed for the nation to see” in that year.

‘Story of the Little School Under the L,’ was conceived by Elder when strolling under the L stop with a colleague in 2010. Five years later, he said the project began in earnest. To produce the murals, Elder uses the students in ART 291, “Creating Murals.” The class usually reaches 20 students, and no art experience is required to take the class, he said.

“[The project] is a blessing in a way, because in my mural class, we used to go to various parts of the city to do compositions for various non-profits around the city— we do a lot of public art work,” Elder said. “But more and more, it’s challenging for students to travel week-to-week to a particular spot to do actual artwork.”

In the class, students learn how to prepare their materials ahead of time and to make a budget — the two things Elder said are “all the skills a muralist needs.” To actually create the murals, Elder and the students use a material called PolyTab, which allows them to put the murals up “like wallpaper.”

Elder and a team of some of the class’ available students installed the work during the last week of July, and by the end of the first week of August, the murals were completed with varnish and graffiti guard to ensure their protection.

Though the murals are a bit hidden under the tracks, their location offers a unique opportunity to decorate a part of DePaul’s campus.

“I don’t know if a lot of people know about them if they’re not specifically involved with the arts community, but I think it’s a great idea,” said Sophie Bell, a fourth-year student and employee of DPAM. “I’m all for utilizing public spaces and making them more beautiful, and also expressing the history of DePaul through that.”

Elder said he hopes that students from all majors will pass his murals and think about just that.

“I hope that possibly they get a sense of what their school is about, more so that the fact that somebody like Father McCabe was always into social justice even 100 years ago,” Elder said, referring to when McCabe gave the first honorary doctorate to Éamon de Valera as the first president of the Irish Republic and lost his job for it. “So that’s what I hope people will come away with [and think about as they] go through that corridor on their way to Fullerton.”

At the dedication and forum, social justice was among the topics discussed as a group of nearly 40 faculty, staff and students discussed possible themes for six of the eight remaining pillars. Each time Elder embarks on new pillars for the project, he said he holds an open discussion with the community to honor the ‘public’ part of public art.

By January or February, Elder said he will have an idea of what next year’s murals will feature.