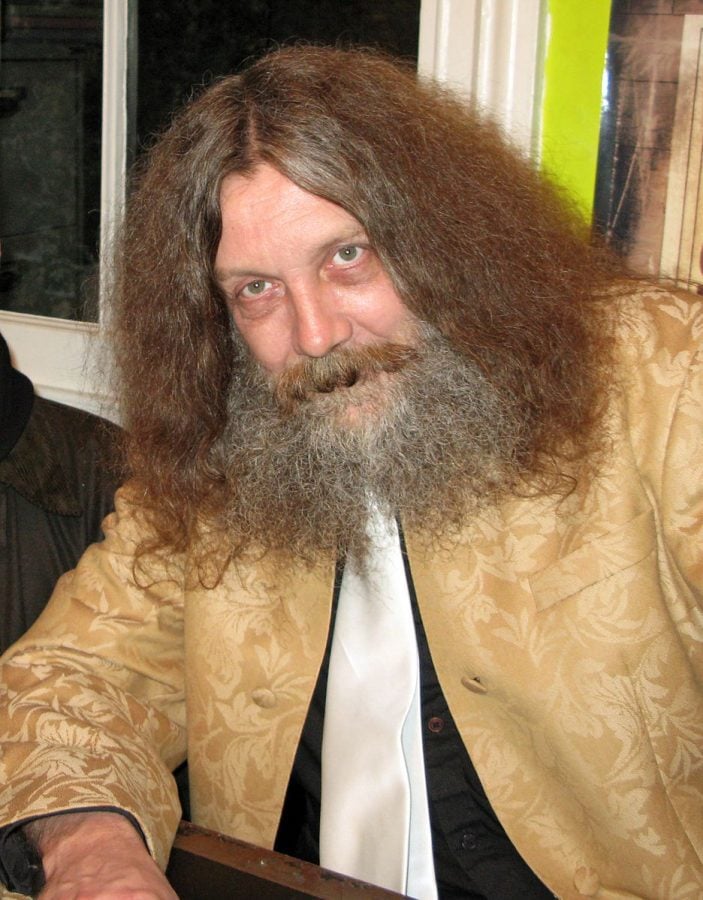 Moore poses for a picture.

The new “Watchmen” series on HBO is coming out in two weeks, but you won’t hear about it in notoriously reclusive author Alan Moore’s new interview with musician Richard Norris.

Moore swore off giving any more interviews a few years ago, but in a new two-hour special on BBC Radio 6 Music, the famed comic book writer presents 20 of his favorite songs and tells stories of his life, philosophy and creative future as part of a new series of comic book-focused episodes on the radio station’s “Paperback Writers” series. Recorded earlier this year in Moore’s hometown of Northampton, England, it’s a surprisingly joyful program that’s well worth a listen.

Moore is perhaps known as the writer and co-creator of “Watchmen,” the influential 12-issue 1986 DC Comics series with artists Dave Gibbons and John Higgins. Widely considered one of the greatest graphic novels of all time, it tells the story of a group of former superheroes as they investigate the murder of one of their own, in the process coming to grips with their legacies and the replacement of a halcyon era of “mystery men” with the soulless cynicism of ‘80s America. It’s taught in schools and college courses and regularly makes lists of the best literary works ever created.

To Moore’s chagrin, the book was adapted into an unspectacular slow-motion-fest by director Zach Snyder in 2009. For a time in the ‘90s Terry Gilliam was in talks to direct, and in this radio special Moore reveals, as he plays “Drive-In Saturday” by David Bowie, that the British rockstar phoned Gilliam asking to play the hard-bitten, trench coat-wearing vigilante Rorschach, though Gilliam’s version never got off the ground.

Throughout the special, Moore’s taste in music ranges from the avant-garde and experimental to the more traditional; his second pick after Bob Dylan’s “Subterranean Homesick Blues” is “Walk Away Renee” by the Four Tops, which he says taught him at the age of 15 that “you can have a big mythological love story in a place with graffiti … even if you hadn’t had any great love affairs at the age of 15, you could still imagine what the pain would be like.”

Moore’s own music is here too, with the show featuring three tracks written by him. All of them feature Moore reciting poetry over backing music, rather than outright singing. The best of the bunch is “The Decline of The English Murder, which closes out the show: It’s an elegiac song about austerity measures in Britain and the suffering of the working class, with some great power ballad-like electric guitar riffs in the background.

Those who have never heard Moore speak before might be unprepared for the deep richness of his voice, which, coupled with his deliberate speaking style and distinctive accent, could lull an insomniac to slumber if the words coming out of his mouth weren’t so fascinating.

Past interviews with Moore have seen him denigrating the comics industry for a lack of originality, an over-reliance on derivative spinoffs of his own works and the way companies like DC Comics treat the writers and artists who work for them.

In this program, however, outside of a few references to corporate comics, Moore largely celebrates what he does like rather than what he doesn’t. It makes for a wonderfully pleasant listen.

Moore comes across as a supremely genial grandfather figure, warmly poking fun at his own eccentricities. He jokes at one point about subjecting listeners to art collective The Residents’ discordant fever-dream of a song, “Constantinople,” saying there are much stranger songs he could’ve chosen.

“If I wanted to sort of torment the population of this country with sonic nightmares that will invade their dreams for years,” he laughs, before conceding that, the song he just played “is sort of a good one for doing that.”

Another wonderful anecdote comes immediately after, when Moore talks about a song he wrote for musician Pat Fish called “Trampling Tokyo,” about Japanese giant monster icon Godzilla’s yearning for retirement.

“You can kind of see in his eyes that he’s not enjoying this any more,” Moore says, adding that destroying buildings and other giant creatures has “long since lost its allure for him.”

When Norris asks if Moore sees any parallels with his own retirement from comics, Moore calls himself a “shuffling, partially-deaf pensioner” and quips, “My heart goes out to Godzilla — I know exactly what he’s talking about.”

Other songs chosen by Moore and played during the program include Brian Eno’s airy “Spinning Away,” Joni Mitchell’s tribute to the paintings of Henri Rousseau “The Jungle Line” and Captain Beefheart’s raw and surreal “Big Eyed Beans from Venus.”

One of the most poignant moments of the show comes toward the end, when Moore talks about working-class voices in art in the lead up to the song “McFlurry” by punk group Sleaford Mods.

“If the working-class are ever discussed, generally by a middle-class person, then there seem to be only two registers that people can adopt,” Moore opines. “‘Oh, these poor people, isn’t it terrible what’s been done to them and how they’re treated — of course we can’t do anything about it, but let’s sympathize with them.’ That casts them as victims.

“The other way of perceiving them is as scum that we’d be better off without — people who are unsightly, who are inconvenient, who are just dragging down the rest of us.”

Moore concludes that while you might not want to listen to working-class voices, “You should — you really should.”

Whatever comes next for Moore, whether it be opera or film projects, as he alludes to here, it’s likely his work will continue to examine such concerns.

Paperback Writers — Alan Moore (Graphic Content) is available to listen free on the BBC Radio 6 website and BBC iPlayer app for the remainder of this month.