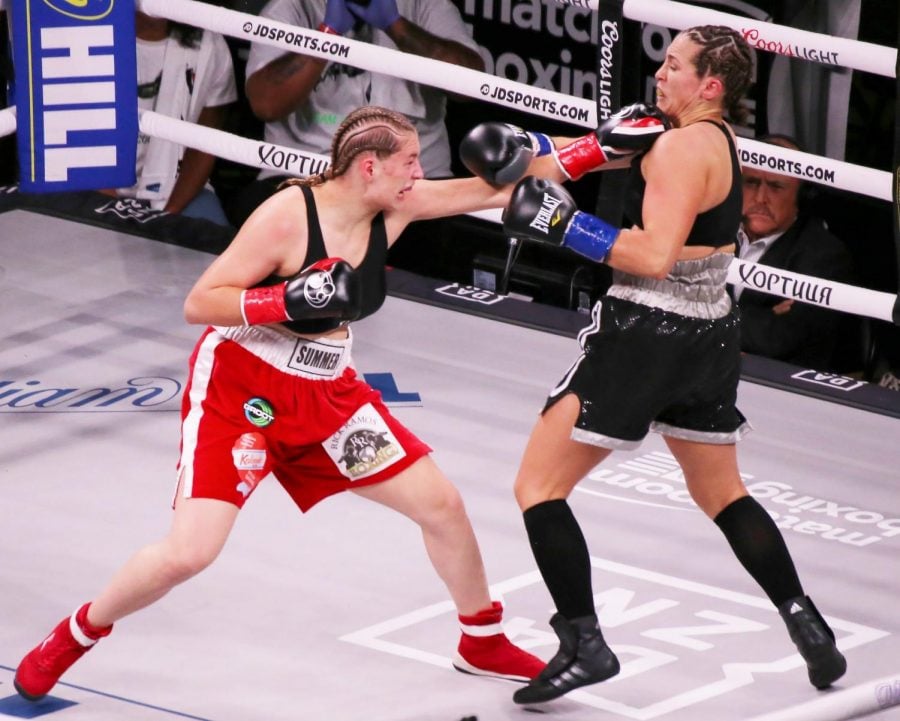 Everything had come down to the day ahead. It felt like a normal fight day even when the stakes were raised. When the first bell rang at Wintrust Arena, Summer Lynn was in her comfort zone.

Lynn, a DePaul freshman, made her professional debut Saturday at Wintrust Arena on the undercard of Oleksander Usyk vs Chazz Witherspoon. Lynn fought Jenna Johlin Thompson, a fighter out of Toledo who went into the fight with a pro record of 1-2.

The fight was the kickoff for a long night of 10 bouts. It was a four-round fight that Lynn controlled throughout. After four rounds against Thompson, Lynn won by unanimous decision, making her 1-0-0 in her brand new career.

Round one was a feeling-out round for Lynn as she fought close with Thompson, dodging blows and getting into a rhythm. In the second, there was a turning moment for Lynn in her debut. She had figured something out and was able to start striking. A big left hook got the early crowd into the fight and impressed the judges.

The big hits continued into the third round, when Lynn was able to keep herself defended and get a couple of combinations in. Speed was a big contrast between her and 35-year-old Thompson. Come the final round, Lynn kept her might and stamina to finish out the fight. The judges named her the winner by unanimous decision.

“In the first round I was really just trying to figure out everything,” Lynn said. “I needed to see how [Thompson’s] power was and how she was going on to see what I needed to adjust. The second round, I was like, ok, I know how her power is so I can go at it.”

Although it was still very early into the night, Lynn had a great crowd of supporters to watch her debut. She had about 40 people in an assortment of family and friends at Wintrust. When she landed the first big strike, you could feel the love.

“The crowd does help with fighting a lot so if you do have a good shot or whatever and the crowd goes wild, it makes the judges and everybody else think, ‘Oh, she got the bigger hit,’” Lynn said.

And she did get the hits. As she went deeper and deeper into the fight, her skill and preparation showed. She was able to get a win in her first professional fight on a card that not many people get to start on.

To do it in her hometown is a whole different side.

Getting to make her debut in Chicago in front of family was huge, but in her corner, she found everything she needed.

Coach Rick Ramos and the rest of Lynn’s team were by her side throughout the whole day. Although Saturday was something new in terms of camaraderie, the mindset was no different.

“Before I got here, it was like any other fight – very chill and very relaxed,” Lynn said. “Me and my team are very nonchalant and [in] light spirits. And when it’s go-time, we flip the switch.”

The switch into the instinct that provided the guidance to a win.

“It’s a switch where we lose like all self-humanity,” Lynn said. “When it goes off, it’s all business. After the fight, it flips back on and you are happy and get to see your friends and family and all who came to see you.”

Her family and friends came out in red ‘Team Summer’ shirts to support her in the fight, and the hype from that created the professional environment. Her parents were there just like any other sporting event a kid’s parents go to, but naturally, it all felt different.

“I’ve never been scared for any of Summer’s fights when she’s been through jiu-jitsu, judo or wrestling, and then any of her amateur fights,” Summer’s father, Ron Lynn, said. “But when we got the notification that she was turning pro, it was like my heart dropped. It was the first time I had ever been scared to watch her fight.”

The fright that comes from that new level is countered by the trust and belief they have in their daughter. It’s a faith not only in Lynn herself, but also her team.

“The whole team supports her,” Ron Lynn said. “She has Jessica McCaskill, Kim Carlson, she has Rick [Ramos] that believes in her so much. It’s more like a family than a team even though they are both in one.”

Her team was with her as she fought, supporting her throughout the fight. McCaskill and Ramos would be back in the ring later in the night as Ramos coached McCaskill in her WBC and WBA junior welterweight title defense in a rematch she won against Erica Farias. It was a big night for Ramos and Body Shot Boxing Club, which represents both McCaskill and Lynn.

Lynn’s jump to the professional level could not have gone better on Saturday. The hometown atmosphere and the bigger stage proved to be well-handled. And friends and family got to support her through the day.

“She went from amateur fighting with kids and skipped the middle and made a big jump to pros,” Lynn’s mother, Charlene Lynn, said. “I’m very proud of her and I felt in my heart that she would do good at this level.”