OPINION: NCAA needs to pay up 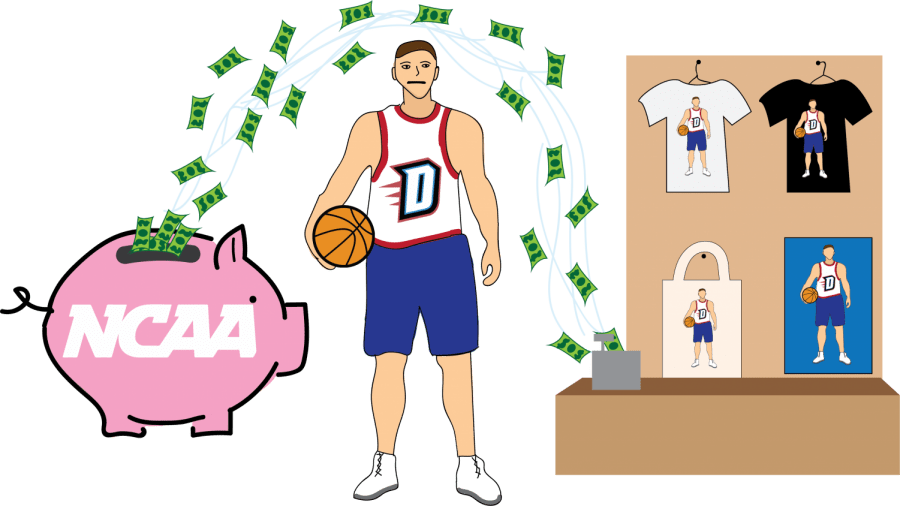 It’s absolutely time for college athletes to get paid.

It’s also time for the NCAA and the federal government to come together and cooperate on creating a federal Fair Pay to Play bill that would allow college athletes across the nation to make money off their name, image or likeness. Some states, like California, Illinois and Florida, have already signed or proposed their own state laws that will and could go into effect as early as next year.

It may seem progressive for states to act quickly, but California’s law could give schools in that state a strong recruiting advantage, making it unfair to other states without the law.

California Gov. Gavin Newsom signed the Fair Pay to Play Act on Monday, Sept. 30 and while the law does not force schools to pay athletes, it allows college athletes to hire agents who can acquire business and sponsorship deals.

The law will not go into effect until Jan. 1, 2023. Several representatives from other states have filed bills like California’s. Emanuel Welch, from Illinois, filed a bill on Sept. 30 that would allow Illinois college athletes to make money from endorsement deals. If passed and signed into law, it would take effect in 2023.

Kionne McGhee, from Florida, also filed a bill on Sept. 30 aimed at preventing the NCAA from blocking college athletes from receiving compensation for the use of their likeness or name. If passed and signed into law, it would take effect as early as July 1, 2020.

However, not all representatives believe that states should legislate this. Anthony Gonzalez, a representative from Ohio, believes the California law and other state laws could bring potential problems, like unfair recruiting, and wants the federal government to act quickly. Gonzalez said he is planning to propose a new national law to give college athletes the opportunity to make endorsement money, he told ESPN.

Dan Azzaro, a public relations and advertising professor at DePaul specializing in sports marketing, does not necessarily agree with Gonzalez that the government needs to act quickly and thinks it’s the role of the NCAA to come up with a national plan.

“There will have to be some sort of overriding guidance to this, and perhaps this is where the NCAA can step in and lead the discussion,” Azzaro said. “There are several issues here, including everything from smaller sports to women’s sports to the role of transfers to existing school sponsors.”

Daniel A. Carpio, a lawyer from California and partner at Dunn, Carpio & Turner, also said that there is no immediate need for the federal government to act on this.

“No one really knows exactly how the California law will play out, how it will impact recruitment and to what extent,” Carpio said. “The federal government is better off letting states legislate this, watch what happens and then engage in legislative actions where it sees fit and as appropriate.”

“I’d say the most likely scenario is that the federal government will have to step in, not to even the recruitment playing field, but when confronted with any jurisdictions that are still denying players their rights to profit from their likeness,” Carpio said. “Given the delay in enactment, there is ample time for states to develop their own framework, and then open the door to possible federal regulation.”

If states continue to move forward with their own legislation, it could give them an unfair recruiting advantage and smaller schools in those states could lose recruits and money overtime.

“The bigger issue will be the big [schools] getting bigger, and the mid majors perhaps falling to a lower level of competition,” Azzaro said.

Dane Wiley, a former college volleyball player who now coaches younger kids, said it’s long overdue for the NCAA to figure this out.

“California, Florida and some other states already have an advantage when it comes to recruiting because of their weather, location and powerhouse programs,” Wiley said. “The NCAA needs to take charge because if this law keeps going state by state, it could take other smaller states longer to catch up, recruiting wise, and their programs could lose funding.”

One of the goals and arguments of proposing a federal Fair Pay law is that it could possibly eliminate recruiting violations and illegal payments. Azzaro is optimistic that a federal law could deter these illegal financial transactions and violations in the future.

“What this may be is start to eliminate the ‘payments’ being done under the table, if endorsement money comes in, there may not be a role for the friends of the program helping out,” Azzaro said.

Carpio agreed and said that any law that allows an underground system to come to light and operate in a regulated market is generally preferable.

In order to avoid unfair recruiting advantages and possibly reduce illegal payments, the NCAA and the federal government need to collaborate and come up with a national plan sooner rather than later. It’s time for athletes to get paid and make money off their likeness and image, but it needs to be on a national level for it to be fair across the playing field. There is no legal argument that should prevent the NCAA from doing this, it’s simply righting an archaic business model that should have been deemed illegal a long time ago.