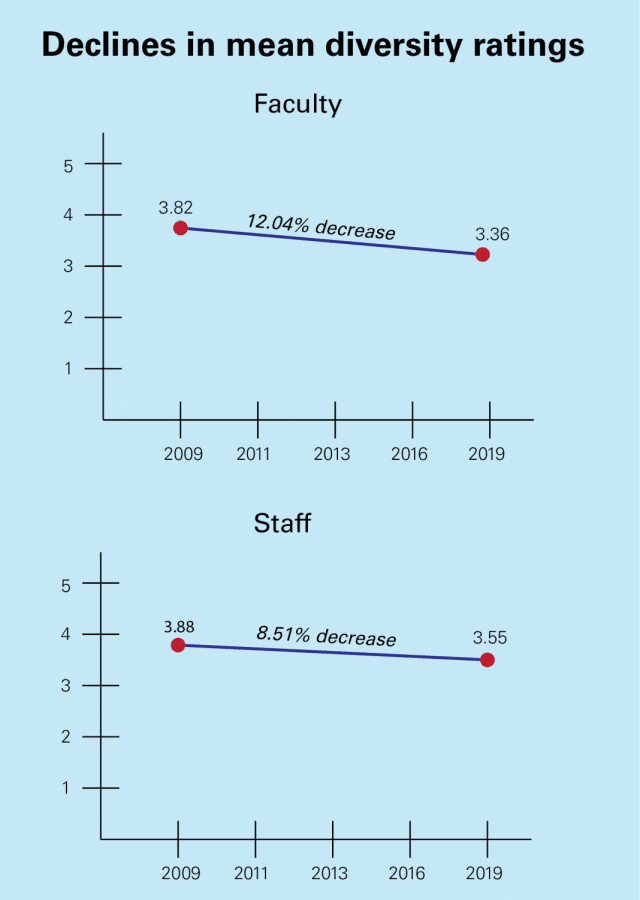 At President A. Gabriel Esteban’s State of the University address last Thursday, faculty and staff raised questions about DePaul’s addressing of diversity, specifically with regard to the recently released results of a climate survey that showed declining ratings of diversity by faculty and staff.

The survey showed that between 2009 and 2019, DePaul saw a 12.04 percent decrease in mean ratings of diversity amongst faculty and and an 8.51 percent decrease amongst staff, according to a PowerPoint by the vice president and interim provost.

These climate surveys, issued by the Office of Institutional Research and Marketing Analysis, are issued biennially, with this survey taken last February. The survey saw a 60 percent response rate for full-time faculty, 53 percent among operations sector staff and over 60 percent for non-college based staff in Academic Affairs, according to university spokeswoman Carol Hughes.

The survey is designed using a five-point agreement scale, with five being the most agreement. Diversity-specific mean ratings were indexed from at least 10 questions – issues like DePaul’s rates of recruiting and hiring employees from diverse backgrounds, how DePaul values diversity, accommodations for disabilities and scheduling for religious holidays – making it difficult to deduce specified places DePaul needs to change.

“It’s a bit difficult to tell, is it an issue of wanting more diverse faculty? Is it an issue of retention of faculty?” Interim Provost Salma Ghanem said. “We have to remember that with survey questions, they cover a lot of things. It all depends which aspect of diversity you’re talking about.”

But how does this increased diversity translate into faculty and staff’s perception of diversity within the institution? Many faculty believe it doesn’t.

“Diversity, Equity and Inclusion (DEI) are not working well at DePaul University,” associate professor and chair of the political science department. Valerie Johnson said in a PowerPoint presented to Faculty Council in April. “It leaves members of diverse groups feeling very lonely, devalued and misunderstood… It replicates rather than resolves conflict.”

“We here at DePaul are not immune to the problems associated with living in a racialized society,” she said. “There’s no need for us to act as if we are.”

DePaul is working to abate this with actions like the appointment of two Presidential Fellows, faculty members to look at diversity issues with Esteban, Ghanem said, as well as splitting the role of the dean of diversity and research into two positions — one looking into diversity and the other into research.

Ghanem also cited Esteban’s diversity committee and diversity advocates in each one of the colleges —a key person in every college that provides support for diverse faculty and acts as a point of connection between deans and faculty.

“We are trying to, even before the survey came out, to make sure that we are paying more and more attention to this issue,” Ghanem said. “It’s a very important issue.”

Some of DePaul’s faculty and staff feel these solutions are merely emblematic, not actually addressing issues at hand.

“From my experience, it’s a dawning recognition that the kinds of policies that were supposed to address diversity issues are lip-service initiatives,” said Dr. Maureen Sioh, an associate professor of geography. “They put in place, say, someone who is supposed to address these issues, and it’s almost as if they just check the box. There’s no follow-up on that.”

Johnson agrees that actionable strategies to address diversity are limited. Diversity Equity and Inclusion at DePaul is symbolic, she said in the PowerPoint, focusing on events and programs rather than fully addressing structural issues.

Administration points to the structure of hiring as a means to increase diversity amongst faculty and staff. As previously reported by The DePaulia, Esteban answered diversity questions at the State of the University address by explaining the faculty hiring process. Ghanem echoed Esteban’s explanation.

“Faculty hiring is a faculty-driven process,” she said. “When there’s a faculty search, there’s a faculty who makes the recommendation on who should be hired. It’s not that an administrator says, ‘We are going to hire this faculty.’ Where administration comes in is to train the faculty in terms of diversity training.”

Despite the administration’s lack of control over hiring, many faculty believe that’s not the only way for diversifying. Johnson emphasized the “equity and inclusion” part of diversity, ensuring that not only the numbers are reached, but faculty and staff of color are actively integrated.

Sioh looks to a solidified timeline to set change in motion.

“They need to appoint a [diversity] committee made up of faculty, because they’re faculty and they’re accountable to each other instead of being accountable to their immediate superior and employer,” she said. “And there has to be a university commitment to whatever the faculty puts forward as a plan of action, there will be a time-table for when this happens.”

But as it stands for some, DePaul’s diversity efforts fall short.

“I think people have become disillusioned, really,” Sioh said. “I know I personally will not fill out those surveys anymore. It doesn’t go anywhere.”