Chicago recruiting on the uptick for Blue Demons 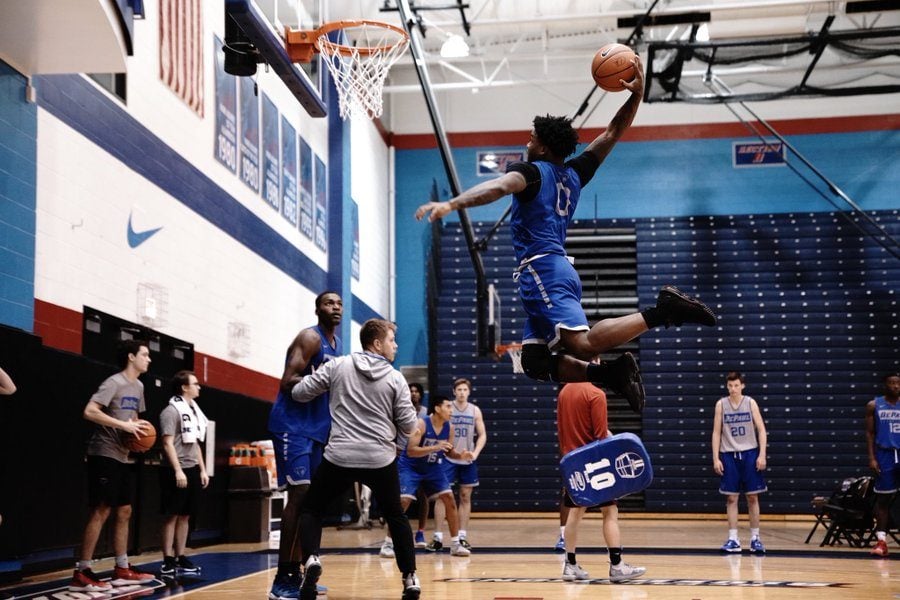 DePaul freshman Markese Jacobs goes up for a dunk during one of the Blue Demons’ practice. Jacobs is still recovering from a partially torn ACL.

For years DePaul’s recruiting in Chicago has been lackluster, letting top tier players either go to rival schools within the city or allowing programs from the outside to come into Chicago and steal those recruits. For the first time in a long time, the Blue Demons were able to land two of the best Chicago players: freshman Markese Jacobs and junior transfer Charlie Moore.

In the first four years of head coach Dave Leitao’s tenure, DePaul had a combined 16 players on their roster who were from Chicago — and eight of those 16 players were at DePaul during Leitao’s first season back. Since the 2015-2016 season, the Blue Demons and Leitao have only been able to land eight Chicago players.

Going into this season, however, DePaul will have five Chicago players on its roster with two of them being four-star recruits: Jacobs and Moore.

When Jacobs decided to decommit from Kansas, a perennial NCAA Tournament team each season, and then choosing to go to DePaul instead of other schools in Chicago that was a huge step forward for the Blue Demons’ program. Leitao also recognizes that being able to land a player like Jacobs helps to change the narrative about DePaul basketball.

“I think he made a major step forward when he decided to decommit from Kansas and I want to stay home,” Leitao said. “Obviously, its long been talked about what that means for the talent in the city and focusing on DePaul, different than people have in the past. He’s there, Charlie adds to it as well and then we will just continue to take it person-by-person, recruit-by-recruit and see if we can build off it.”

Jacobs, who attended Uplift on the North Side of Chicago, partially tore his ACL during his senior year. Even though that was a major setback, Jacobs is nearing the end of his recovery and is targeting a return for the start of the season.

“My recovery has actually been pretty good, it’s going way better than I thought,” Jacobs said. “It started off pretty slow because I was dealing with some problems, but finding the right physical therapist person to get comfortable, to just focus on getting stronger, just focus on my body. So, it started off pretty slow, so we had to pretty much hit it harder than we expected. But now we’ve been getting positive outcomes. I’ve been on the court lately, and I’ve been showing a lot of progress.”

Even though Jacobs still isn’t fully ready for the start of the season, according to Leitao, Jacobs has his eyes set on a huge freshman season.

“My individual goal is to most likely be [the] Big East freshman of the year and goals to achieve with the team is to make the [NCAA] Tournament, that’s our No. 1 goal,” Jacobs said.

While Jacobs has experienced hardship through an injury, his fellow DePaul teammate Charlie Moore is trying to get his college career back on track after an unsuccessful stint at Kansas.

Moore, who was named Mr. Basketball in Illinois in 2015-16, played at California in his freshman year. While at California, Moore led the team with 120 assists while averaging 12.2 points per game in 34 starts. But because of personal issues, Moore choose to transfer to Kansas so he could be closer to home.

After sitting out the 2017-2018 season due to NCAA transfer guidelines, the former four-star recruit struggled in his limited time with the Jayhawks.

In May, Moore announced that he was leaving Kansas and coming to DePaul to be closer to his family.

“It was a decision for me and my family being more comfortable, having my parents be more comfortable as well and the support I have here in Chicago is just a great feeling,” Moore said.

While Moore knew where he wanted to play basketball in his junior year, he still had to wait six months to hear back from the NCAA regarding his eligibility status for the 2019-2020 season. On Oct. 4, however, the NCAA granted Moore a waiver to play in the upcoming season.

“I was extremely excited, took a little while for me to get the news sometimes it would come in mind, but I tried to attack it everyday like a normal day like I was already eligible,” Moore said. “Playing hard, trying to be a leader on the court, so I feel great about the news.”

For Leitao, on the other hand, the news was exactly what he needed heading into a crucial season.

“It’s been a long time since he transferred, for him not to know, for his family to not know and obviously as a basketball team for us not to know, it gives us clarity that’s first and foremost, “Leitao said. “But then understanding he adds a lot to our basketball team, as a point guard, as an older player and especially as a talented player.”

With the start of the season just around the corner, both Jacobs and Moore provide the Blue Demons with instant help on the court — especially in the backcourt, however, the impact of having two of Chicago’s most elite high school prospects on the same roster has the potential to change DePaul recruiting for years to come.