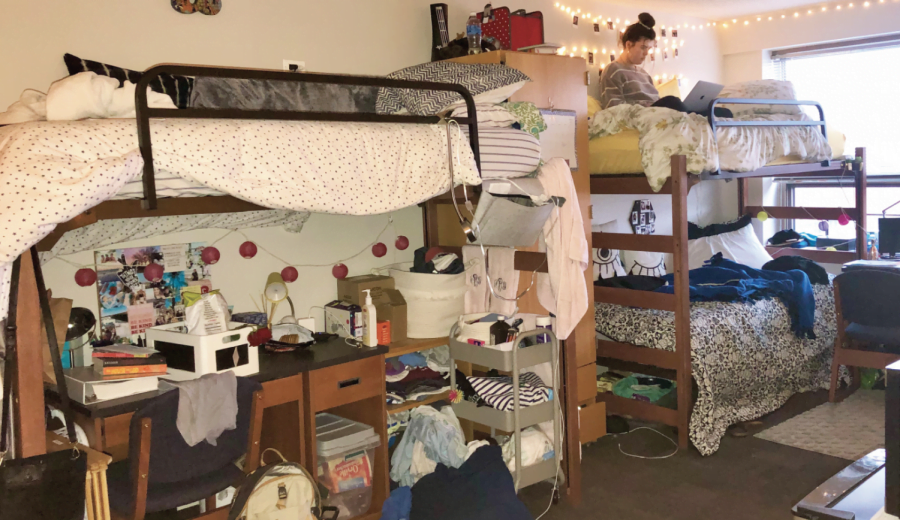 Students at DePaul have spent over one month now in their assigned on-campus residences, and freshmen like Kassidy Kascht, who was placed in converted housing, expressed their concerns about condensed dorm space and the social challenges that arise from living in converted units.

When Kascht and her requested roommate learned they were assigned a converted triple, Kascht said she felt “frustrated” and “upset” initially knowing that she would have to share a room with two additional roommates in a space designed for only two people.

Due to limited space for student housing and a high demand from one of the largest incoming class of freshmen in recent memory, DePaul places students into converted housing in order to accommodate more incoming students on campus. Converted housing units are supposed to be larger rooms designed to fit between three and four residents, according to the Department of Housing website. There are currently 258 students living in dorms that were not designed to house them, excluding incomplete data from University Hall.

Some converted units are “supposed to be bigger, but compared to other rooms, it’s the same size,” Kascht said. “Being in a cramped space with nowhere to really go is hard when you have three girls living in here.”

Each converted housing unit is furnished so that students who may not have their own closet can have enough space for their belongings, but this cumbersome furniture that cannot be removed from the room becomes a daily obstacle for residents to contend with.

“Getting out of bed is probably my hardest challenge just because the wardrobe is right there,” Kascht said. “I’ve gotten a big bruise on my back from running into it before.”

Kascht said that she and her roommates currently “make due” with their room assignment and are trying to “make it work.”

When Kascht was helping one of her roommates request a room change, their resident adviser explained that it could be difficult to receive exact dorm preferences because of the already full housing units on campus.

According to Director of Housing and Student Centers Rick Moreci, on-campus housing between Lincoln Park and Loop residences is completely full at just under 102 percent capacity as of September 2019.

The converted and temporary housing residents push the maximum capacity and make up the approximate 2 percent difference. For example, by design, Clifton-Fullerton hall can house 333 residents. As of late September, Clifton housed 405 residents. Belden-Racine Hall is designed to house 254 students, but it is currently holding 318 residents.

When DePaul President A. Gabriel Esteban spoke to faculty and staff at the annual State of the University address earlier this month, he stressed the importance of improving enrollment. Assuming that at least part of future enrollment growth will include larger freshman classes, new student housing options may become necessary.

“There are currently no plans to build additional residence halls on campus,” Moreci said. “However, I can tell you that if the university does grow, and especially within the freshman class, I am certain there would be conversations at many levels around the university about how to accommodate this growth. I have confidence that if DePaul begins to grow via new academic initiatives, it will do so responsibly and will therefore consider how to best manage said growth.”

Some residence halls on campus have not been impacted by the converted and temporary housing additions. For example, University Center — which DePaul shares with other local colleges like Roosevelt, Robert Morris and Columbia College — houses 390 by design and is currently holding that many residents. Courtside Apartments is designed to hold 12 residents and is currently housing 12 residents.

For other freshmen, like Mariam Qudeimat, there is plenty of space in the converted housing unit, but the converted living situation presents social challenges.

When Qudeimat received her housing assignment letter, she said she was crying on the phone with her requested roommate because they learned they would be separated from each other and placed into converted housing.

When asked how the social aspect of converted housing has impacted her, Qudeimat described her new converted roommates as the “Regina Georges” of college.

“I don’t need to be best friends with them, but we’re not even close to being friends…We don’t have anything in common at all,” Qudeimat said. “The past 22 days since I’ve gotten here could not have been farther from what I was expecting. I went home this weekend, and that was the highlight of my time here, which is not how it’s supposed to be.” 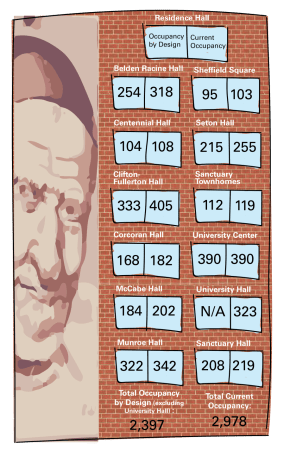 As soon as the room change request forms became available, Quidemat submitted a form to the Department of Housing in hopes of changing her situation.

In response to being asked about using campus support services to address the roommate issues in the meantime, Quidemat said, “I don’t really expect anything from them at this point. I’d rather just be by myself and have my own room. That’s what I put in my room change request form, but I haven’t heard back yet.”

According to the Department of Housing, room assignment preferences and changes will be considered but cannot be guaranteed. However, according to Moreci, students in converted housing are given priority once a permanent space becomes available.

For freshmen like Maya Franco, converted housing was an adjustment to make, but she has learned to “make it work” without having to submit a room change request.

“Converted housing so far hasn’t affected my day-to-day life,” Franco said. “It’s just another person in the room. So far, I have no complaints. I’d obviously rather be in a regular double, but I’m making the best out of my situation. I haven’t had any horror stories yet, but maybe talk to me at the end of the year.”

Moreci assured students who make room change requests that the department “will get them moved.”

“The art of assigning and reassigning students is a puzzle with many pieces,” Moreci said. “Our goal, our hope, is to get most or all of the students that want to move, moved in the fall quarter. We are always accepting room changes at any point, and we will work to get those accomplished as quickly as we can.”