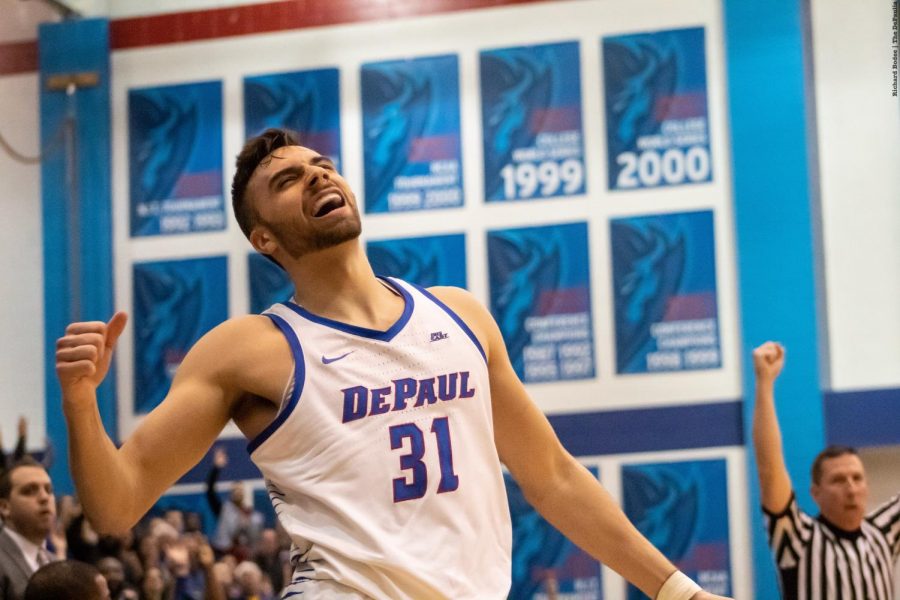 Senior guard Max Strus exclaims after the final buzzer sealing the loss for DePaul Friday night at the McGrath-Phillips arena. The Demons received second place in the CBI tournament, with South Florida Bulls getting first place. Richard Bodee | The DePaulia

Former DePaul guard Max Strus signed a two-year deal with the Boston Celtics of the NBA on Sunday. Strus played two years at DePaul and averaged 20.1 points per game in his senior year. After his senior year, Strus went undrafted in the 2019 NBA draft before signing a two-way contract with the Celtics and played for them in the Summer League.

Strus will sign a two-year contract to play for the Celtics, relieving him of G League duties, according to Shams Charania of The Athletic. Strus will compete for a spot on the 15-man roster for the Celtics for the next two years, with a partial guarantee in his rookie year of half of the rookie minimum.

Strus, 23, is the only Blue Demon from his class to be in the league and the second active DePaul player after Wilson Chandler of the Brooklyn Nets. Strus played two preseason games for the Celtics where he netted 15 minutes adding two rebounds and three assists.

In the summer, Strus averaged 9.8 points, 2.8 rebounds and 2 assists per game in an 18-minute average over four games.

Now, Strus will compete against Javonte Green for the final spot on the 15-man roster, although neither are eligible for the G-League. This could either mean that Strus will suit up for the Celtics during the season, or he will be waived with a nice paycheck while he works out for other teams.

“A lot of people think I got the [last] roster spot, but that’s not exactly what happened,” Strus said to Mark Murphy of the Boston Herald on Sunday. “[I] have to keep working hard and then we’ll see.”

At DePaul, Strus excelled after transferring to Chicago from Lewis University after his sophomore year. After sitting out for a year, Strus started all 31 games he played while averaging 16.8 points, 5.6 rebounds and 2.7 assists per contest. In his junior year, he was named to the Big East All-Academic Team.

In his senior year, Strus was named to the All-Big East second team after leading the Blue Demons to the CBI championship series. He averaged 20.1 points with 5.9 rebounds and 2.2 assists to boot. He averaged 51.7/36.3/84 shooting splits in 35 games. He holds the single-game three-point record for the Blue Demons, with eight against UIC and Georgetown. He also scored a career-high 43 points in a game against St. John’s. He had 29 straight games in double figures.

Strus was one of the most prolific Blue Demons in recent memory. His success at the next level has yet to be seen.

Strus, Green and Tacko Fall are all the Celtics players whose status with the team was still up in the air before Sunday. Fall will be taking a two-way deal with the Maine Red Claws, Boston’s G League affiliate. Either Green or Strus will be waived.