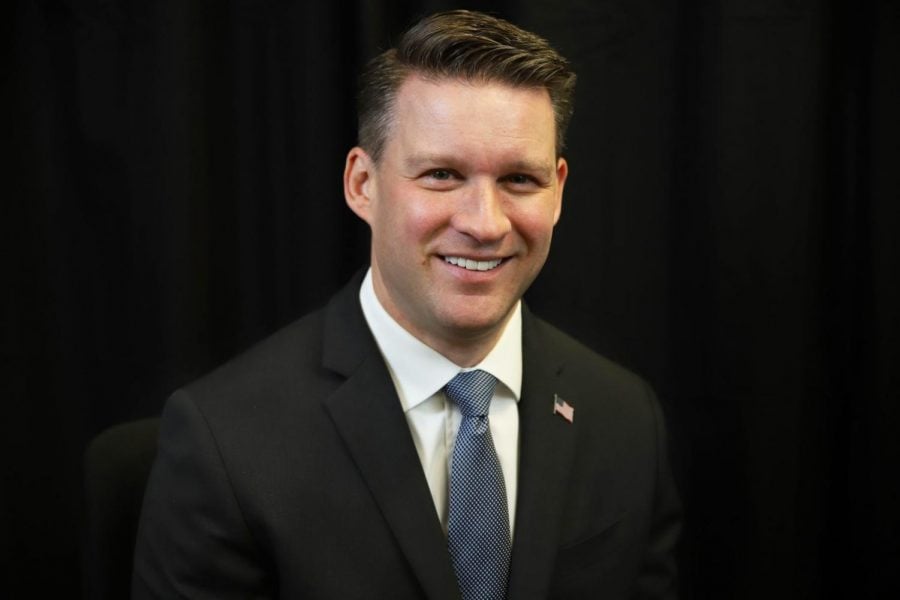 Bill Conway, an adjunct professor of finance, is running against incumbent Kim Foxx for State’s Attorney.

The last two months have been the longest year of Bill Conway’s life, he said.

An adjunct professor of finance at DePaul’s business school, Conway announced his run for Cook County State’s Attorney on Aug. 8 — the first to announce a run against current State’s Attorney Kim Foxx. He said his decision to run was widely based on his time as an assistant state’s attorney in Cook County between 2006 and 2012.

“I just didn’t like what was happening in that office,” he said. “I had worked in it, and I really got to see firsthand how important it is to have a State’s Attorney office and criminal justice system that is honest and fair and equal. You know, it’s really a beacon of public trust.”

To improve the state’s attorney office, Conway said he wants to focus on criminal justice reform, gun control and the foundation of the office itself.

The type of criminal justice system Conway said he wants to run is one that is “fair and humane” to nonviolent offenders, and he said his views on “who needs to be there and who doesn’t” was largely informed by visits he made to Illinois’ jails as an assistant state’s attorney.

“If we have a choice, generally we should not send people to jail or prison,” he said. “Jail is not a place for people that are addicts. It’s not a place for the mentally ill, unless they’re a danger to society. […] I think we need to remember that distinction when we’re talking about post-bail reform and criminal justice reform.”

To combat gun violence, Conway said he wants to focus on the stream of guns coming into Chicago.

He explained the problem like this: A person caught with an illegal gun likely bought it from a friend. That friend probably bought it out of a trunk that had 10 guns in it, and those guns probably came from a house with 30 to 40 guns in it. The 30 to 40 guns likely came off a truck or rail car from a state that is more permissive with their gun laws.

“The problem is that in prosecuting those cases at the local level, we seem to keep picking off the person with the gun,” Conway said. “What we need to do at the state’s attorney office is begin to work our way up that chain from the car to the house so we can really begin to disrupt the supply chain of illegal guns here in Cook County.”

Conway said he is uniquely positioned to track these guns because of his experience in the U.S. Navy, where he used his knowledge of finance to track the Taliban’s money trail in Afghanistan and Qatar. Being at war informed the way he feels about gun possession in general.

“In the big picture, part of the reason I talk about gun crime and getting weapons of war off the street is that I’ve seen firsthand what weapons of war can do,” he said. “I can tell you based off that experience they really don’t have a place on the streets of Chicago’s Cook County.”

But to succeed at either of these things, Conway said he’ll need to refocus the state’s attorney office itself, and to do that, politics can’t be part of its foundation.

When discussing the office’s reform, he didn’t want to talk about “that one case,” referring to the Jussie Smollett case for which Foxx’s handling was criticized due to her personal ties to Smollett. He wanted to talk about a client of his named Candice Clark, who was charged with a similar crime of filing a false police report.

Though she never went to court, Conway said Clark has to visit a probation officer monthly, maintain a job and receive special orders if she wants to leave Cook County as a result of the charge.

“It saddens me that she, like many people, has gotten unequal treatment from the state attorney’s office,” Conway said.

“When I think about the honest and fair and equal criminal justice system for victims and defendants, who you know, what your net worth is, your race, your gender, what zip code you’re in—none of that should matter in terms of what kind of justice you’re going to get,” he added.

Other changes he hopes to initiate are the modernization of the office’s filing systems and the sharing of resources across other departments.

“He was happy and excited to teach — not just by the book, but what we are going to do in real life,” Tran said. “Even during breaks, [Conway] didn’t take a break; he would talk to students and sometimes stay until 9:30 or 10 talking to them.”

But when asked why he thought Conway would be a good state’s attorney, it was his qualifications that stood out.

“Have you seen his resume? I think it’s the most impressive resume in the world,” Tran said. “There’s no reason he shouldn’t be.”

That’s not to say Conway will not face obstacles along the way — particularly when it comes to his competitor, Foxx.

“I haven’t paid any attention to the race, so I could not say,” said Wayne Steger, a DePaul political science professor, in an email in response to a question regarding Conway’s ability to win. “I would generally say that it is hard to defeat an incumbent in this city/county.”

Another obstacle Conway may face could be in regard to his family ties. His father, William E. Conway Jr., is co-founder of The Carlyle Group, one of the largest private equity firms in the world, and a billionaire. In a city where big money is widely associated with corruptness, this status may become problematic.

But Conway said he has no interest in playing with politics. To prove that to his desired constituents, he said he has chosen not to seek the endorsement of Cook County’s Democratic Party, a party historically known as a machine party where big money and big networks reign supreme.

“I really want voters and everyone to understand that, if elected state attorney, I’m not going to owe anybody anything except for the voters and the people of Cook County,” he said.