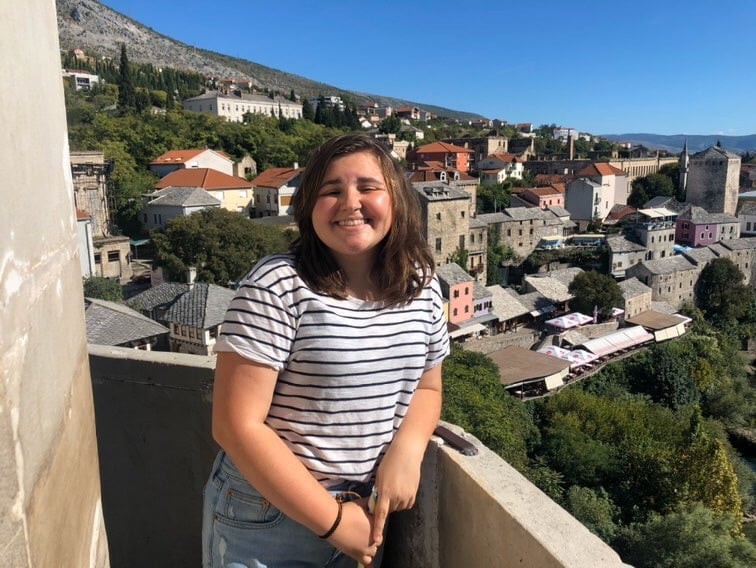 When she’s not in class, Erna Hrstic spends her days exploring Sarajevo’s city center and talking with fellow exchange students. It’s not unusual to see Hrstic and her friends sitting in a cafe talking and laughing all night, that’s just what students do in Bosnia and Herzegovina.

Hrstic was one of two freshmen awarded a Boren Awards scholarship to study for a year in Sarajevo, Bosnia and Herzegovina. The Boren Awards are given to students by the National Security Education Program to study how certain countries are essential to U.S. national security. Upon graduation, Boren Awards recipients work for at least one year in their desired U.S. government job.

“I want to be a diplomat,” Hrstic said. “The purpose of my career is to help the people in Bosnia and Croatia because I think the Balkans is an incredible region and it has so much history and so much diversity that the rest of the world doesn’t see.”

Hrstic and her family have been traveling to the Balkans, a region in Southeast Europe, every other year since she was five years old. Her parents came to the U.S. as refugees, leaving most of their family behind. Their biennial trips encouraged Hrstic to look into international scholarships before college.

This determination started when she was in elementary school. Ivana Hrstic, Erna’s mother, took the initiative to go to her principal and start fundraising for UNICEF. As she grew up, she joined Model U.N. because she wanted to help people.

“Erna has the desire to change the world,” Ivana said with tears in her eyes. “With Erna, she missed part of her childhood I believe, because she was so dedicated, she was so determined.”

Her determination to help others isn’t limited to those in other countries. She has played a major role in helping her sister get through school. Her sister, Hanna Hrstic, discussed the constant support from Erna while they were at the same school and even when they traveled together.

“She reminds me of Dora the Explorer when she travels because she always wears a little backpack,” Hanna said. “But she’s definitely not afraid to go out and talk to people to find out what to do or where we need to go.”

Her social abilities helped her succeed in the first month of her yearlong adventure. Her roommate Selinn Oksuz, a Turkish student studying English Language Teaching, describes Hrstic’s communication skills, cheerful demeanor and warm-heartedness as great reasons to be around her.

“We went to the mountains to make some barbecue. There was one tunnel that stayed from the war, no lights or anything,” Oksuz said. “Erna scared one of my friends, two minutes later he scared us in return, and we had so much fun.”

While the point of a study abroad program is to study, Hrstic recognizes the need to learn about more than just the textbooks and class lectures. She has two main goals while she is gone. The first is to become fluent in Bosnian. The second is to learn about the people.

“I really want to understand the people here, their frustrations and why the country is not moving in a positive direction at the moment,” Hrstic said. “I really think that when you go study abroad, it’s not just about academics, it’s about learning how to interact with people.”

Hrstic recognizes that she chose to study abroad in a place that she is familiar with. However, she chose to do it alone. She is the only DePaul student in the program, and one of the few Americans at her school. Hrstic talked about how it may be scary to go to a foreign country completely alone, but she recognized this as an opportunity to go out and make new connections.

“I like to say I’m a very social person, so it’s fine for me to be out with people I don’t know at all,” Hrstic said. “I get to meet a lot of amazing people and cultures I wouldn’t have met otherwise.”

Recently, she was able to attend a talk from Bakir Izetbegović, the son of the first Bosnian president. Experiences like these are unlike anything she would be able to undertake in Chicago. For anyone considering studying abroad, there are scholarship opportunities out there to help fund a once-in-a-lifetime experience like Hrstic describes.

“Everyone has to study abroad,” Hrstic said. “Pick a wild country, a place you wouldn’t necessarily see yourself living in, especially if it’s a short-term program.”