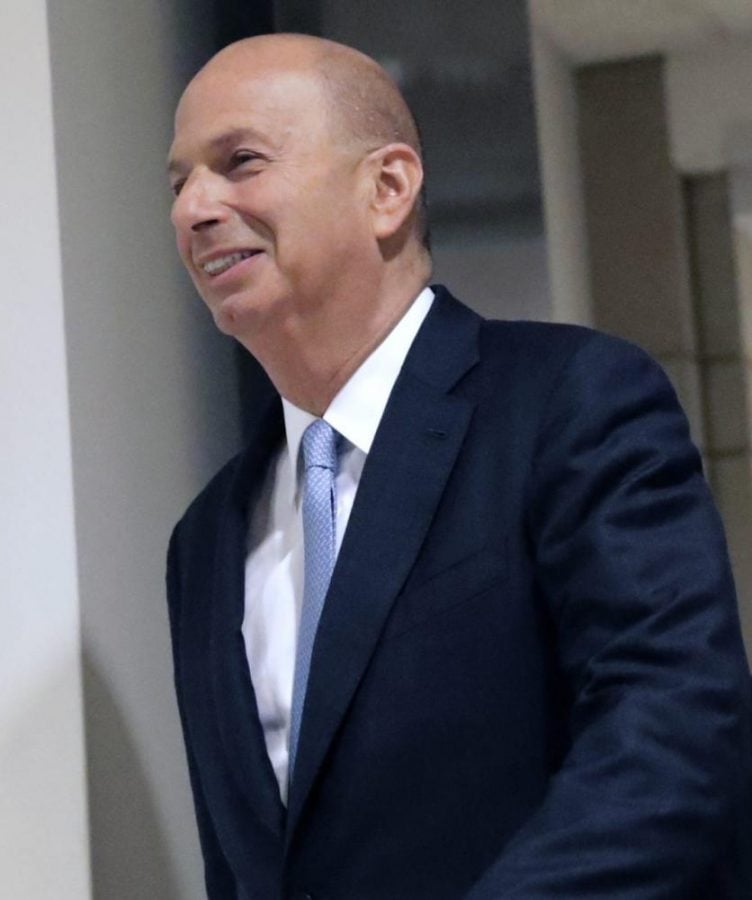 US Ambassador to the European Union Gordon Sondland arrives for an interview with three House committees leading the impeachment inquiry on Thursday, Oct. 17, 2019.

Current and former Trump administration witnesses testified behind closed doors as the impeachment inquiry President Donald Trump entered its fourth week. The inquiry was spurred by a whistleblower’s complaint regarding a July phone call between Trump and the president of Ukraine, Volodomyr Zelenskiy. In that call, Democrats allege, the president asked the government of Ukraine to investigative former vice president and current Democratic presidential nominee Joe Biden and his son, Hunter, then on the board of Ukrainian gas company Burisma Holdings. Republicans say there was no evidence of quid-pro-quo.

MONDAY, Oct. 14 — Trump tweeted he wanted to know who the whistleblower is; Democratic-led House committees heard behind closed doors from Fiona Hill, a former member of the National Security Council and expert on Russia; she testified that former National Security Adviser John Bolton called Trump’s personal attorney Rudy Giuliani a “hand grenade who is going to blow everybody up.”

At a ceremony honoring the Stanley Cup-winning St. Louis Blues, Trump said, “I wouldn’t worry about it, fellas,” when asked about the possibility of impeachment.

State Department official George Kent testified behind closed doors that three people close to the White House — the “three amigos” — were given almost total control of U.S. foreign policy toward Ukraine: Energy Secretary Rick Perry, Ambassador to Ukraine Gordon Sondland and special envoy to Ukraine Kurt Volker; Giuliani said he earned $500,000 from a company run by Lev Parnas, who was indicted last week for campaign finance violations; Giuliani said he would not comply with impeachment subpoenas.

At a press briefing House Speaker Nancy Pelosi said the House will not hold a formal vote on the impeachment inquiry, as the White House and Congressional Republicans have demanded; House Intelligence Committee Chairman Adam Schiff said transcripts may be released in the future, but in the meantime Trump administration witnesses will continue to testify behind closed doors.

WEDNESDAY, Oct. 16 — David Correia, a businessman indicted last week on federal campaign finance charges related to the 2016 Trump presidential campaign, was apprehended at Kennedy Airport in New York; Michael McKinley, a former aide to Secretary of State Mike Pompeo, testified behind closed doors that his decision to resign a week ago was influenced by “the implication that foreign governments were being approached to procure negative information on political opponents” within the White House.

THURSDAY, Oct. 17 — Trump ordered flags be flown at half staff after Elijah Cummings, leader of the House Oversight Committee — one of six committees conducting the impeachment inquiry — died of unspecified causes related to longtime health issues.

In prepared remarks leaked to the press, U.S. ambassador to the European Union Gordon Sondland said he was “disappointed” that the president asked other diplomats and himself to involve Giuliani in dealings with Ukraine.

Acting Chief of Staff Mick Mulvaney admitted Trump withheld military aid to Ukraine in order to get the country to investigate the origins of the 2016 investigation into the Trump campaign, Russian election interference and the location of a hacked DNC server; Mulvaney also said most of those out to get Trump were “career bureaucrats who disagreed with his politics”; in response to the comments, Schiff said “Things have gone from very, very bad to much, much worse”; Perry announced he would resign by the end of the year.

FRIDAY, Oct. 18 — Mulvaney walked back his Thursday comments, saying in a new statement that they were misunderstood and that there was no quid pro quo; House Minority Leader Kevin McCarthy said he agreed with Mulvaney’s clarification.

THE WEEK AHEAD: Eight closed-door interviews have reportedly been scheduled by House committees conducting the impeachment inquiry, including one with former U.S. ambassador to Ukraine Bill Taylor, currently the chargé d’affaires at the U.S. Embassy in Kiev.