When your community is being upended, sometimes public art is best weapon. 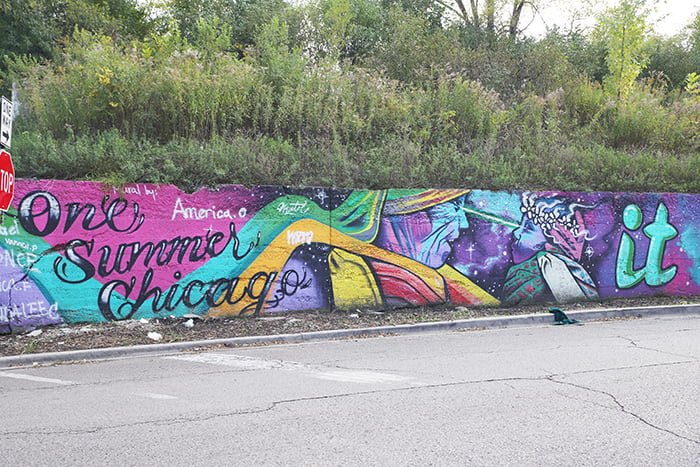 A mural in Back of the Yards

The Latinx Cultural Center held a “Fighting Gentrification with Community Art” panel in Munroe Hall this past Wednesday, addressing the way many communities use art as a form of activism against gentrification.

The panel was a dichotomy of Chicago neighborhoods in different stages.

For Humboldt Park resident Arocho,  public art is an act of claiming space in the gentrifying neighborhood and a way for long-term residents to prove they aren’t going to allow Humboldt Park to gentrify freely. For Lara, Back of the Yards resident, it’s community building —  a refusal to let outside perceptions of the South Side neighborhood affect the community’s growth.

Gentrification describes the transformation of a neighborhood to reach middle-class standards, according to the original definition by sociologist Ruth Glass in 1964. Lower-income residents are displaced as property values rise and rents increase, changing the social character of the neighborhood. For many in the Latinx community, this manifests as a destruction of communities that were built to survive a system that had no space for them in the first place.

“Gentrification is a form of colonialism,” said Monica Ramos, Latinx cultural center coordinator. “Our communities have been built around spaces. It’s not just a heritage sentiment — it’s a sentiment of survival.”

Long-term residents in Humboldt Park have used murals and sculptures to minimize the damage of gentrification, Arocho said.

He focused on art in Paseo Boricua —the six block stretch on Division Street between Western and California avenues in Humboldt Park. Since the Division Street riots in 1962, Arocha said, the community has been active in keeping the Latinx population in Paseo Boricua. In the ‘90s, the community began using public art as activism, he said, and have been successful in limiting gentrification processes.

“When a community begins to gentrify, you become invisible,” he said. “You lose the sense of community and it feels like [the neighborhood] can only get better if we’re not there.[Public art] is a way to stabilize and claim space.”

Arocho described the strategy to claim Paseo Boricua — placing murals in each corner of the area. “The idea was, if we control those six blocks, then we can spread from them later,” he said.

Art like the Puerto Rican flag sculptures positioned on the border of Paseo Boricua, he said, gives long-term Latinx residents a better sense of belonging, as well as ward off gentrifiers.

“Developers look to cater to a certain group of people,” he said,“ and Puerto Rican flags are kryptonite.”

With this in mind, Lara created Murals from the Yards, an organization that documents murals in the neighborhood, giving local artists credit and preserving the images.

“When members of the community create the murals themselves, they have more of a sense of attachment to it,” Lara said. “It’s more meaningful to have engagement with it.”

Some murals themselves were created by local high schoolers, like “Lupita con Los Ninxs on the Tree,” painted by students of Peace and Education Coalition High School on the wall of a fence on 47th Street

The murals are largely located on privately owned property, like “Ninx de Arte,” painted on the wall of a privately owned viaduct. Murals from the Yards brings them into the public eye.

“We make these murals a part of the community,” Lara said.

Unlike Arocha, Lara doesn’t see much evidence of gentrification in his own experience in Back of the Yards.

“[Back of the Yards] gets abandoned from the rhetoric that it’s dangerous,” he said. Sometimes he feels like the news portrayal of his neighborhood helps minimize gentrification by depicting it as a negative.

Arocho hopes that public art will continue to be a way for people outside the community to be aware of who was there before. When entering gentrifying neighborhoods, Arocho urges an understanding of the complex nature of community histories and recognizing privilege.

“Share and know the history of your neighbors,” he said. “Be a part of the communities.”

“Art is a form of resistance, it’s expression and communal memory,” Ramos said. “It reminds us of who we are and where we come from.”