In age of fake news, lying more part of ‘fundamental human condition’ than ever 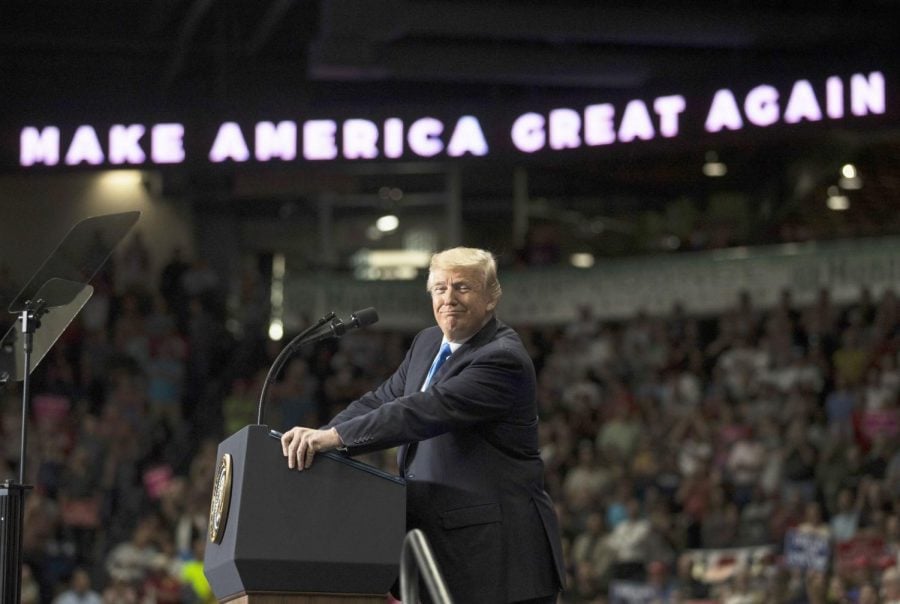 President Donald Trump is dominating the media’s attention for the Republican primary.

With lies being spoken and tweeted by our president, lying has become the forefront of our culture. When the president of a country, someone who is supposed to lead by example, makes it normal to lie, others follow suit.

Between the internet and politicians, sometimes it seems like there are more lies circulating than truths. The media has been blamed for consistently providing “fake news.” But in reality, they’re just middle men, sending information from those in power to the general public.

“When politicians speak to you, you either have to believe what they’re saying or spend an unreasonable amount of your energy trying to prove them wrong,” DePaul senior Elizabeth Wilcox said. “I just don’t always have the energy.”

“The Bottomless Pinocchio,” a rating system from the Washington Post, helps readers distinguish when politicians are lying. The system uses a number of Pinocchio icons, one through four, to describe the level of truth in a politician’s words. A single Pinocchio can be viewed as mostly true, whereas four Pinocchios are described as “whoppers,” meaning the lying is so intense, the fact-checkers cannot describe how bad it is.

The lying in today’s world is often spoken about, but why it’s happening and what started it is often misspoken about.

Roberta Garner, a sociology professor at DePaul, said the true start to our lying-intensive culture comes from origins in small communities.

“When we lived in small communities, it was easy to check on things,” Garner said. “So, it was easier to have a day-to-day, very simple, common sense check on what’s true and what’s false. As more and more of the contents of our world is mediated, it becomes harder and harder to have those everyday checks.”

The structure of our society has changed. With everyone and everything being online, it’s easier for people to put the person they want to be online instead of who they really are. Since many online interactions are with people one doesn’t have direct contact to, it’s hard to tell what is true and what is a lie.

“Sometimes I’ll lie as a joke to people I don’t know because I know it probably won’t hurt them,” Wilcox said. “I don’t think I’m that interesting, so lying to people about who I am is fun.”

Amusement and joy that can come from lying can stem from the human’s ability to imagine. Garner said the ability to create complex thought and create something from nothing is what makes lying “fundamentally human.”

“How we differ from any animal, most animals communicate about things that are at hand,” Garner said. “Whereas human beings have this incredible capacity to imagine things that aren’t at hand.”

Humans feel empathy, so sometimes lying is done to protect someone. But should someone lie if friends or strangers who ask if they look good in something and an honest answer may hurt their feelings?

“I sometimes tell customers they look good in a top even though I wouldn’t pick it for myself,” Wilcox said. “And it’s not because I’m trying to drive sales, I just feel the need to be nice and spare someone’s feelings. I think sparing people’s feelings within reason is not inherently bad.”

This gray area of lying can be extended to politicians who make false promises. They aren’t outright lying, they may even be things the politician has strong feelings toward wanting to accomplish them.

“False promises are somewhere between a total lie and the truth,” Garner said. “They’re things that could happen but they’re not really going to happen.”

With the rise of media and easier access to false truths, omitting the truth, pretending to be someone you’re not and more, there are so many ways to lie. It is important to note the intent behind a lie. That is what can make the situation less gray.

“I genuinely don’t think it hurts to lie to people sometimes,” Wilcox said. “I try to keep it at a level that I’m not actively hurting anybody.”

Often, what’s meant to be an innocent lie does hurt people around us. Marie Fiorenzi, DePaul junior, said she experienced this over a spring break trip. She and four other people decided to drive to Canada for a couple days. There were only so many seats in the car and the roommate was already going home for break, so the group didn’t tell her about the trip. When the roommate found out, she reacted poorly, and it put a strain on their relationship.

“I do think I should’ve told her sooner, but she was so excited to go home for spring break,” Fiorenzi said. “The situation ended fine but still, lying is never good and it always makes me feel bad.”

Lying on the big screen

Many movies follow what happens when characters lie. In some movies—like the ones below—lying is a central theme to the plot of the film.

“Charade” (1963) – A woman is surrounded by liars who try to find the fortune her dead husband stole.

“Face/Off” (1997) – A criminal and police officer switch faces. How can the officer catch the criminal when no one believes who he really is?

“The Tourist” (2010) – A criminal changes his appearance to evade capture. His lover uses another man to keep police off his trail.

“Gone Girl” (2014) – A man is suspected in his wife’s disappearance. Lies and manipulation lead the story through several twists and turns.

“A Simple Favor” (2018) -A woman’s disappearance brings her whole life into question,  as it is revealed she lied about her identity.

Lying and cheating—especially in the context of romantic relationships—has been a prevalent theme in songs. Below are some examples through the years.

“Lyin’ Eyes,” Eagles, 1975 – This story follows a woman who married an old rich man she doesn’t love, so she cheats on him. The narrative follows the struggle between her cheating and lying and the commitment she made.

“I Could Have Lied,” Red Hot Chili Peppers, 1991 – A narrative about a man who told a woman how he felt and she didn’t feel the same way. He discusses how lying could have saved the relationship.

“Love The Way You Lie,” Eminem, 2010 – It tells a story of an intense relationship and the lies someone tells to prevent the inevitable end.

“Lie,” Lukas Graham, 2019 –  The story of an ex-girlfriend who comes back after she ends the next relationship. She lied about the other man, but she was also lying to herself.