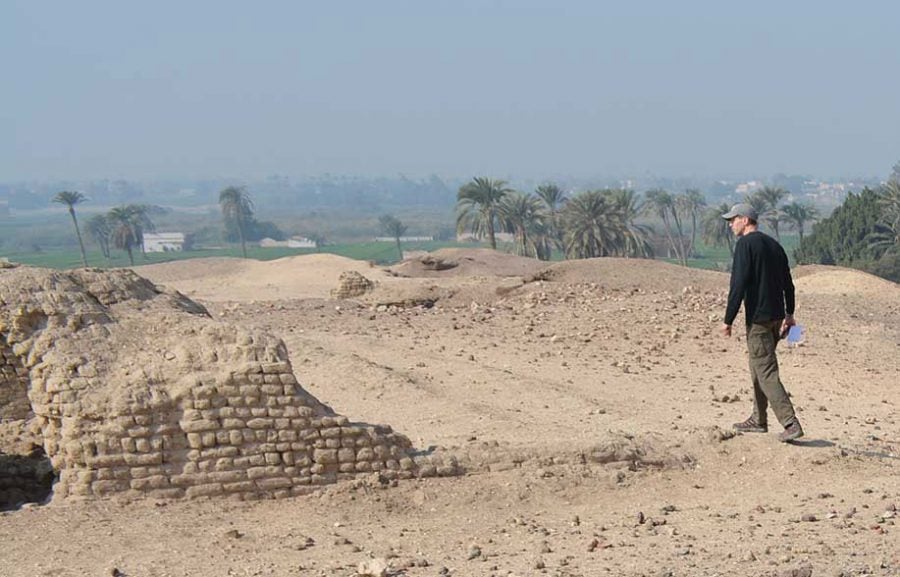 DePaul does not harbor an especially large history department, let alone a department specifically dedicated to archaeology. As a result, a DePaul student might be surprised to hear that one of their own professors received a $75,000 grant for an archaeological preservation project. However, those who know Professor Scott Bucking were anything but surprised.

“He is irrepressible,” said longtime colleague and Associate Dean Margaret Storey. “He is deeply committed to his field, creative, determined, and he has a passion for what he does,” she continued.

Bucking applied for the grant to preserve a group of archaeological remains in Beni Hassan, a mountainous region of Egypt that sits along the Nile River Valley. He has been working on the site for a decade now and has already experienced historical sites like the Tomb of Hatshepsut, a famous female Pharaoh of ancient Egypt. With this grant, Bucking and his team will be able to perform the first comprehensive recordings of ancient hermitages carved directly into the mountains.

“Grant writing is a pretty regular thing in my profession, since you always have to be looking to the next field season and figuring out how it’s going to be supported,” Bucking said.

He said that there are times where much larger grants are awarded, but that the norm is a yearly cycle of smaller grants that consists of  a field season and a grant application season. The passion for his field that Storey mentioned has paid off for Bucking over the years, as he has been awarded upwards of 25 grants supporting his work.

Applying for grants is essential to funding his work, but his passion lies out in the field and in sharing his findings with others.

“The most fulfilling part is working with my team in the field and seeing the impact of our work on the community in Middle Egypt,” said Bucking. That commitment to the local community demonstrated  through addressing a range of issues in the area, such as undocumented digging, where non-professionals attempt to excavate the ancient sites for valuables. This badly damages the artifacts and hinders the preservation process, if not completely deterring it.

Another prominent issue Bucking is trying to address in tandem with the local community is agricultural encroachment. Due to increasing food needs, farmers are expanding their fields up the slope of some of the mountains, compromising the tombs in the area.

“This is addressing an economic need that that community has,” he said, “but we as archaeologists want to preserve the stuff too.” Bucking’s commitment to balancing the community’s needs with the preservation of the region’s history demonstrates a social awareness that is not typical in archaeology.  This is especially true in an area like Beni Hassan, which harbors over 3,000 years of history in its landscape.

Bucking acknowledged that there is a long history of historians going into communities and taking what they wanted because they believed they knew better. This results in decontextualized history, which is where artifacts are shown without any real understanding of the people who created them. This is a significant  reason why Bucking strongly emphasizes training the next generation of historians, specifically archaeologists, by pulling from communities local to the sites being worked on.

“I have a largely Egyptian team and that is largely by design,” he said. “I think that our commitment should be there.” Bucking does not want his work to be about going to these sites and bringing artifacts and exotic stories back to the U.S. Instead, his focus lies on building up Egyptian communities and better preparing them to preserve the history of the area.

Bucking’s passion reaches areas far away from the field, including to the students he has taught at DePaul. Chandler Whitney, a former student of his Honors 102 course on ancient Egypt, said that her interest in Egypt and archaeology grew significantly  thanks to his teaching.

“I always looked forward to going to Professor Bucking’s class,” she said. “His stories are absolutely fantastic, and it was so neat being able to see pictures from the archaeological sites he’s worked on.” Whitney added that she often recommends his courses to fellow students as well.

It is often said that passion is infectious, and Bucking inspires many of those around him. Through his drive for both discovery and dispersing knowledge, obtaining grants is just a means to perform much more meaningful work: connecting the people of today.

“Our goal is to get at those past people, but we also want to connect that heritage to the living communities that are there,” he said.