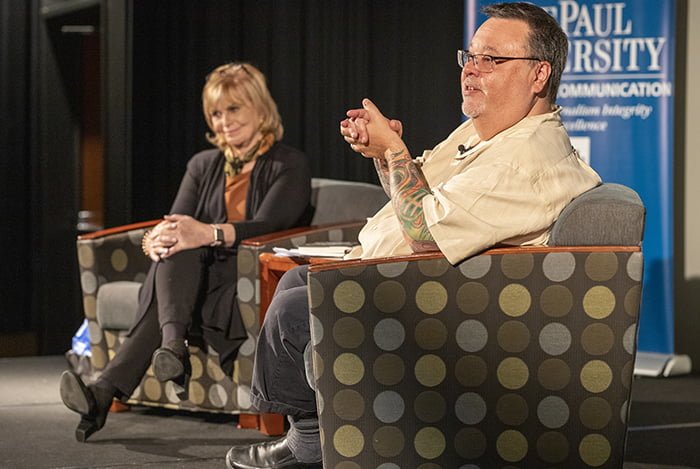 Jim DeRogatis spoke with Carol Marin, director of the Center for Journalism Integrity & Excellence last week about his book “Soulless: The Case Against R. Kelly.”

Jim DeRogatis says there are at least 48 women he knows of whose lives were ruined by R&B superstar R. Kelly, and he believes the true number of Kelly’s alleged victims is likely at least twice that number.

The former Sun-Times music critic and “Sound Opinions” co-host spoke last Tuesday with the DePaul Journalism Center for Integrity and Excellence’s director Carol Marin about his more than two decades of reporting on the Chicago-born music artist, a story he also recounts in his new book “Soulless: The Case Against R. Kelly,” released in June.

Kelly was separately indicted by federal prosecutors in both Illinois and New York earlier this year on a range of charges including child pornography and sexual exploitation of children. Prostitution charges were also filed against the singer in Minnesota.

DeRogatis’ investigation into allegations that Kelly repeatedly preyed on underage African-American girls began in 2000 shortly after he reviewed Kelly’s fourth studio album “TP2.com.” He received an fax from an unknown individual with a warning: “Robert’s problem — and it’s a thing that goes back many years — is young girls.” The fax, which DeRogatis passed around for the audience to see at Tuesday’s event, led him and his reporting partner Abdon Pallasch through a maze of police and court records towards an eventual tally of hundreds of sources and dozens of women who said Kelly abused them.

DeRogatis, whose first story with Pallasch about the allegations was published in December 2000, expressed frustration that the allegations against Kelly were not taken seriously by the music industry or mainstream media until recently.

“I was not proprietary — ever,” DeRogatis said. He said he offered to share court papers, depositions and other public documents he had found with other journalists. “I would have danced with joy for seeing one other journalist break a scoop on this story — I really would. I would not have felt depressed and downtrodden.”

The journalist graduated from NYU in 1989 and began his career as a beat and investigative reporter for the Jersey Journal, where he wrote about crime, city politics and inhumane conditions at Hudson County Jail. The latter, which culminated in violent riots in which an inmate was shot and killed by a prison guard, also began with an anonymous fax.

A longtime student of alternative weeklies and writers like Joan Didion and Tom Wolfe, the critic with investigative roots eventually landed a job at the Sun-Times, only to leave after three years for a short-lived stint at Rolling Stone Magazine. He rejoined the paper in 1997 and was a music critic there until 2010.

On the link between journalism and art criticism, DeRogatis said both rely on truth, though journalism requires fairness, which he defined as “bending over quintuple backwards to include the other side.”

“Journalistic ethics required us to be fair, scrupulously so, at every corner, and I don’t think I ever was unfair,” DeRogatis said of his reporting on Kelly. “I also think, as a human being, I believe this man has ruined countless lives and was a monster. I have seen the scars on women’s wrists. I have seen the hospital reports where they took a bottle of pills. I have read the police report of the woman who drove into oncoming traffic on Michigan Ave.

“We are not talking fun and games. We are talking 15-year-old women who after sexual contact with this man tried to kill themselves. And when you say their lives are ruined, that is not hyperbole.”

Marin said the most heartbreaking moment in DeRogatis’ book for her was when Tiffany Hawkins, an aspiring singer who met Kelly at Kenwood Academy when she was a 14-year-old freshman, tells the author she can no longer find pleasure in any music.

DeRogatis rolled up his sleeves to reveal arms covered in colorful, winding tattoos.

“These,” he said, motioning towards them, “are about records that formed me. Records that — in some cases I interviewed these people, they formed my life.”

He said music is a force for good, citing the example of singer Mavis Staples marching with civil rights leader Martin Luther King Jr., singing even as fire hoses and dogs were turned on them.

As for criticism of both his book and reporting on Kelly, DeRogatis said bring it on.

“I would relish at this moment an in-my-face interview with someone who has 50 significant problems with that book,” he said. “I would relish that discussion.”

“Because: Bring it,” he said. “I can defend everything. I’m not going to take that personally.”