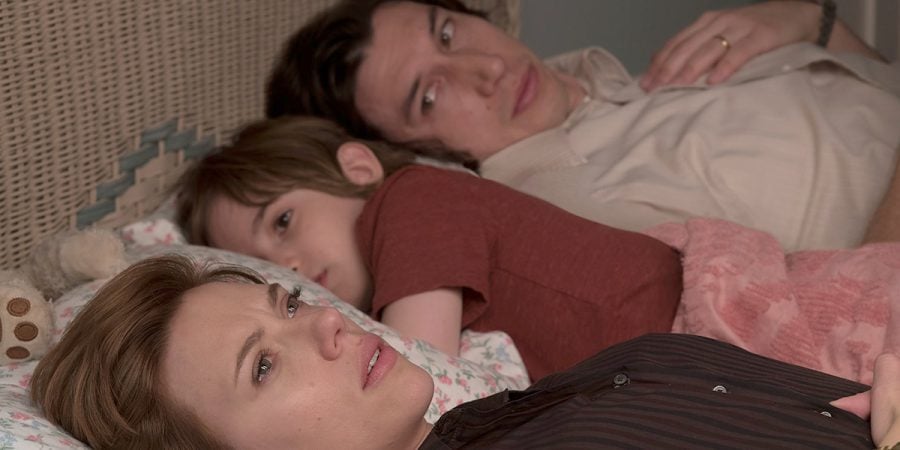 Nicole Barber, played by Scarlett Johansson, holds back tears in bed with her husband, Charlie (Adam Driver), and child. Photo by IMDB

It is very rare that a film can feel personal and universal at the same time. It’s much more rare that a movie can reach into its viewer and uncover a deep, hidden away memory that holds feelings one has repressed far into themselves. Noah Baumbach’s “Marriage Story” does that. It challenges the viewer to remember their own past and to assess the raw story with an open mind.

“Marriage Story” begins with a pair of notes. Charlie says why he loves his wife, Nicole. He mentions things like how she’s a great dancer, she gives great presents, she’s competitive, she knows when to push him and when to leave him alone.

Now, Nicole says what she loves about Charlie. He loves being a dad, almost to an annoying extent, he cries easily in movies, he is very competitive, he is very clear about his desires and he’s a great dresser. All of these things are the sign of a healthy, very deep and loving relationship.

But Nicole (Scarlett Johannson) and Charlie (Adam Driver) wrote these notes because they are getting a divorce, and their marriage counselor asked them to write them and read them to each other. Yet Nicole refuses, and Charlie is reluctant to listen. While Charlie wants to read his, Nicole would rather leave the session altogether than listen.

How two people who can talk so affectionately about each other, yet not be able to let the other one listen, is  part of the heartbreaking collapse of a relationship that writer-director Noah Baumbach portrays  onscreen. Baumbach is  a writer at the top of his game, a man who writes movies that tackle complex issues like depression, divorce and aimlessness, while adding a charm or dark humor that proves his empathetic nature.

Nicole is an actress and Charlie is a director. Charlie has  run a theater company in New York for years now. Their son, Henry, is eight years old and still a momma’s boy. Charlie is an up-and-coming director with an acclaimed mind and ability to create beautiful plays. His upcoming play, which stars Nicole, is on its way to Broadway.

Nicole is most famous for a raunchy teen comedy she made when she was younger, and she made a name for herself in Los Angeles. Yet she remains in New York with her husband, starring in his plays.

There is a force driven between them. They are two artists starving for greatness, just in different ways. Charlie’s controlling behavior becomes too grating for Nicole, and she is sick of being in his shadow career-wise. Charlie is dedicated to his work. All the money he and Nicole make is put back into his company. When they begin to separate, Nicole moves to Los Angeles to star in a TV show, and she brings Henry with her.

Charlie’s play has to move on without her, and so does his life. He wishes to remain in New York, but would rather be with Henry. What happens next is a tale of two cities, as the ex-couple moves forward in a divorce that tumbles into a hasty dogfight that neither of them really wants.

Johannson and Driver each offer excellent performances. The two each get ample time to shine in scenes where they confront the demons of their characters. Monologues galore, and Driver even gets to sing a song! The two put on performances that will leave marks on their two already wonderful careers.

Longtime Pixar composer Randy Newman orchestrated a score that is full of a heartbreaking child-like innocence that rings in with every scene. His music isn’t overbearing, it’s tender and provides a feeling of longing in the audience. His score is a part of the movie that shakes every sentimental bone in one’s body.

The supporting performances in the film are incredible. Ray Liotta and Laura Dern are the feisty and gruesome divorce attorneys that are extensions of the small distaste that Charlie and Nicole have for one another. Their addition to the movie is in their abilities to depict  the ugly part of a separation. They throw things at each other that Nicole and Charlie don’t want to. Everything is uncovered, for better or for worse.

A tale of two attractive, talented artists with dreamy eyes, who separate due to different career paths isn’t some new idea. Yet “Marriage Story” basks  in reality. The custody battle over Henry gets dirtier than what Charlie or Nicole could have ever wanted. Baumbach’s ability to create this story and have it come off so naturally and real is impressive and indicative of an artist on top of his game. It’s the simple things like a hug goodbye that stick so deep.