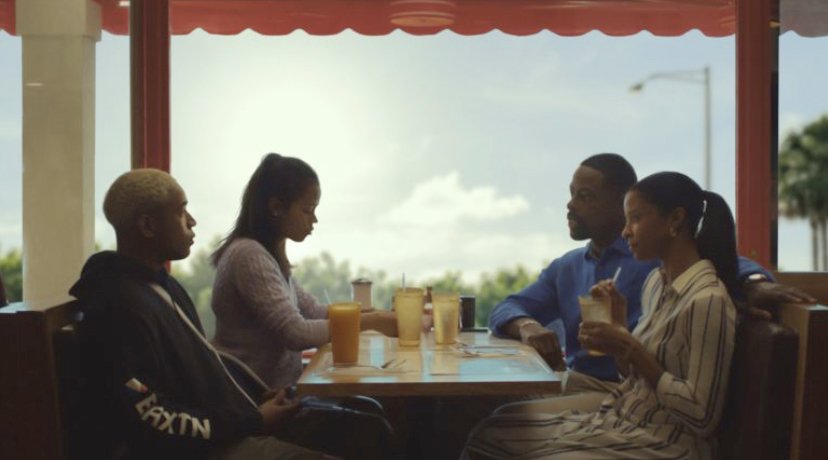 Katherine, Ronald, Tyler and Emily ­— four of the main characters ithat “Waves” follows — sit across from eachother in a diner. Photo by IMDB

Some stories feel so contemporarily fitting — at the right time, experienced in the right place — that they transcend through the screen and invite you to be a part of the story, as tragic as it may be. Such is the case for the new A24 film “Waves,” directed by Trey Edward Shults and starring Taylor Russell, Alexa Demie, Kelvin Harrison Jr. and Lucas Hedges. The unconventional tale follows a suburban African-American family amidst unrelenting turmoil and how their relationships are affected by circumstantial tragedy.

Shults has a seamless relationship with his camera, utilizing film language in the most subtly effective  ways, causing an unsettling and uncanny sensation, where we feel like we are peering into one’s life, uninvited. This tension is one that Shults is keenly aware of, as I got the chance to talk to him, as well as Russell (Emily) and Harrison Jr. (Tyler), who discussed portraying troubled and complex characters, how they balanced the tension during scenes and on set, and more about this subjectively introspective story.

One of the film’s clearest of messages is that we are all inherently problematic people, with our own self-interests and deep-rooted feelings taking control of our demeanor at one time or another. I asked Harrison Jr. about his representation of Tyler in the film, a character who falls prey to the stressors dominating his life.

“I was examining my own life, taking a step back,” Harrison Jr. said. “When Trey and I had started working on the movie, it was about finding the nuances of fitting into this character. Understanding the generation gap between my character and his father. For me, it was therapeutic. Who was I in that moment? What did I want from my dad? What did I want from myself, for myself? It’s the contradictions that make these characters interesting.”

One of the film’s archetypal antagonists is the omnipresent temptation of social media, especially during depressive episodes as seen in the film. These social media trappings are something that are experienced often in real life, but not outwardly discussed or admitted, as it is something people aren’t quick to compare with “stalking,” which is what scrolling through someone’s Instagram essentially is. The cast reflected on this aspect from the film in their own lives, with Shults admitting that he doesn’t have social media, but Russell describing how she just recently returned from a one-year hiatus on Instagram, and how she can now see the inherent issues with social media now that she has distanced herself.

“I was looking at models Instagram’s and not eating for two days, doing crazy stuff,” she said. “It’s hard to not compare yourself to these seemingly perfect people. It allows you to become more of a follower than being active in your life. You need objectivity in your life.”

Shults’ two previous feature film, “Krisha” and “It Comes at Night,” explore the motif of the home, and all the secrets that can lie within a place that looks so normal on the outside. This motif, coupled with the film’s perpetual tension, make for an almost combative experience for the audience, resulting in  some of the most gripping scenes of the year. I asked the director and cast about how they balanced this tension on set within the scene, while  still having a comfortable and warm environment.

“A lot of it is being prepared and doing your research,” Russell said. “Knowing the instruments, the body and script, so well that you go to set feeling that you can do anything and you’re free to do so, coupled with Trey being a great director and creating a non-judgemental, inviting, and free space.”

Shults curated this set, this environment, reflecting on the experiences he had during these emotional shoots.

“I feel like we are all preparing so much that it becomes a second skin,” he said. “When you have trust on top of that, and you’re making things in a trusting environment, you can play and have fun doing this crazy stuff. When I think back on these difficult scenes, I just think of it as the best summer of my life!”