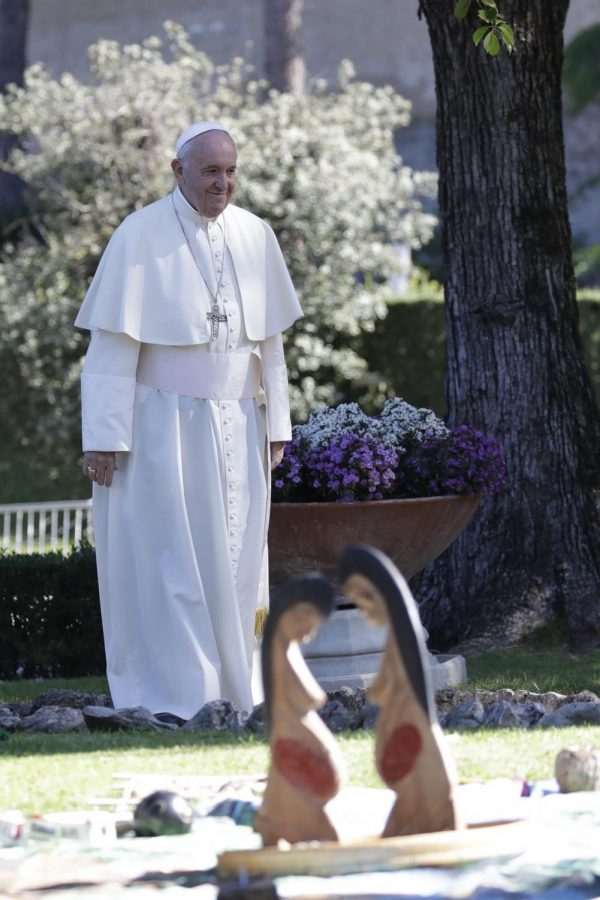 Pope Francis walks past statues depicting naked pregnant women as he arrives to attend a tree planting rite with members of Amazon indigenous populations in the Vatican gardens, Oct. 4, 2019.

Bishops voted on the penultimate day of a synod for Amazonian clergy to suggest that Pope Francis should loosen the celibacy requirement for some priests in the Amazon to promote interest in priesthood. The vote, which took place Oct. 26, was 128 in favor to 41 opposed — the closest margin of any topic voted upon, according to the National Catholic Review.

The question was raised to combat the lack of priests in the nine Amazon regions. In remote areas, there are nearly 8,000 Catholics to every priest, making it difficult for regular worship.

But marriage wouldn’t be an option for all priests. At the synod, Amazonian clergy suggested that the pope allows already-married deacons to become ordained as priests. The final statement of the synod, issued Saturday, said candidates should be “recognized men of the community” who have adequate training and “legally constituted, stable families.”

“They’re just talking about this in the context of the Amazon and perhaps other places where priests are really few and far between,” said William Cavanaugh, professor of Catholic Studies and director of the Center for World Catholicism and Intercultural Theology at DePaul. “But it is another step towards the relaxation of the mandatory celibacy for all Latin rite Catholic priests.”

Allowing married men to be ordained would break a centuries-old precedent in the Roman Catholic Church, but according to Cavanaugh, celibacy has not always been a requirement of the priesthood.

“There was no celibacy requirement at the beginning,” Cavanaugh said. “It mentions Peter’s mother-in-law in the New Testament. And so did the apostles, who are that kind of original model for priesthood — they were married. Peter was considered the first Pope, and he was married, so it only becomes a solid requirement in Latin rite — so the Western Catholic Church.”

He added that while allowing married Amazonian men to become priests is a big step, there are other places in the world where these exceptions have been made. In some cases, he said, previously Lutheran ministers who convert to Catholicism have been permitted to maintain their marriages after obtaining priesthood.

Though the pope is only considering lifting the celibacy requirement for specific areas in the Amazon, some feel the move might be coming too quickly.

“There has just been so much going on in the church recently,” said Martyna Szmitko, president of DePaul’s Catholic Student Union. “I believe they have to deal with that and get that under control before they decide to jump into this idea.”

Szmitko added that by lifting the celibacy requirement, it might make the vocation of priesthood appear less divine.

But for others, the consideration of lifting the requirement for priests — be it in the Amazon or elsewhere — has been long coming.

“I think it’s dated,” DePaul senior Victor Lara said. “Because if the relationship with God is secure, and you’re devoted to the Lord, then why not share that same kind of devotion with another person?”

According to a 2018 CBS News poll, nearly 70 percent of Catholic Americans are in favor of letting priests marry.

The bishops’ vote to lift the celibacy requirement for some priests is just a suggestion to the pope. The pope attended all the synod’s meetings where celibacy in the Amazon was addressed and can take as much time as he would like to decide.

Additional topics addressed at the Amazonian synod included climate change and the role of women in the church, including the potential allowance of female deacons.