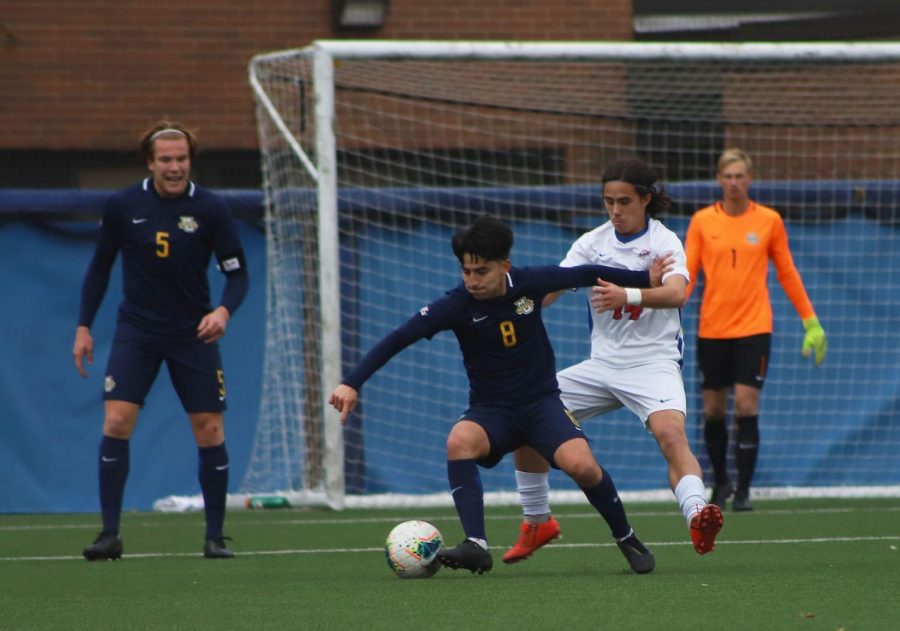 DePaul's Jacob Seeto defending a Marquette forward during a 1-0 loss at Wish Field on Nov. 16, 2019.

The last game of the season usually has big implications for teams, and when that last game is coming before the postseason, it can mean different things for the two opponents.

That was true for the men’s soccer team and their rival opponent Marquette on Wednesday. When the Golden Eagles traveled down from Milwaukee, they were looking to will their way into the Big East playoffs. DePaul, who was already eliminated from postseason contention, was trying to do the same to their biggest rival.

Yet the stakes were just that much higher for Marquette, who rose to the occasion in the second half, with one of their flurry of shots connecting for the lone goal of the afternoon. Marquette (8-8-1) defeated DePaul (5-9-3) 1-0 in the closing game of the season.

DePaul could not play spoiler, no matter how hard they tried. In the first half, Marquette was dominating the possession battle, getting solid opportunities but goalkeeper Drew Nuelle held strong.

The Blue Demons’ offense was able to find their own groove, firing off six shots in the first half. Senior defender Max De Bruijne had a great look when a chip shot deflected off an opposing Marquette player square into the crossbar, even with another few opportunities, the Blue Demons couldn’t find the back of the net.

After the dust settled in the first half, both teams stood still at 0-0. A draw would knock Marquette out of the playoffs and break DePaul’s three-game losing streak.

Tough defense from the Blue Demon’s kept them within striking distance all game.

“We just kind of sat in and waited for them to make a mistake and then once we were able to get the ball on an outlet we were all able to go down the field together,” freshman defender Michael Anderson said.

The Golden Eagles just opened up the second half with a fire, which put them up for good. A right-footed shot in the 62nd minute by Lukas Sunesson put the game away.

“They started playing a lot more direct in the second half, which I think is definitely tricky for us to deal with,” Nuelle said. “And, you know, they popped us for one which was unlucky, it was just a miscommunication between some of our defenders.”

The Blue Demons had a flurry of chances in the second half as well as a few clean looks in the first half, yet none of the looks could find the netting.

“I mean we had a really good chance in the second half I wish we could have tucked away,” head coach Mark Plotkin said. “And then in the first half, we hit the crossbar so we definitely had our own chances.”

The Blue Demons got a few more opportunities late in the game, as a couple of close calls threatened Marquette. But ultimately it was curtains on a season that could have gone a lot better for Plotkin’s squad in his second season. A four-game losing streak capped off the Blue Demons’ season.

Going into the game, the team had to look past their mishaps and find an unconventional meaning in the contest.

“We were still trying to play for some dignity and we’ve only given up two goals at home prior to this on our home field,” Nuelle said. “Keeping a clean sheet was our first priority and definitely trying to beat Marquette because they’re only an hour and a half away they’re one of our close rivals.”

Trying to end the year on a high note was a big deal for the Blue Demons, who are returning just about all of their players.

“We talked more about just kind of ending the year on a positive note and defending Wish Field like we’ve been doing pretty well all season,” Plotkin said.