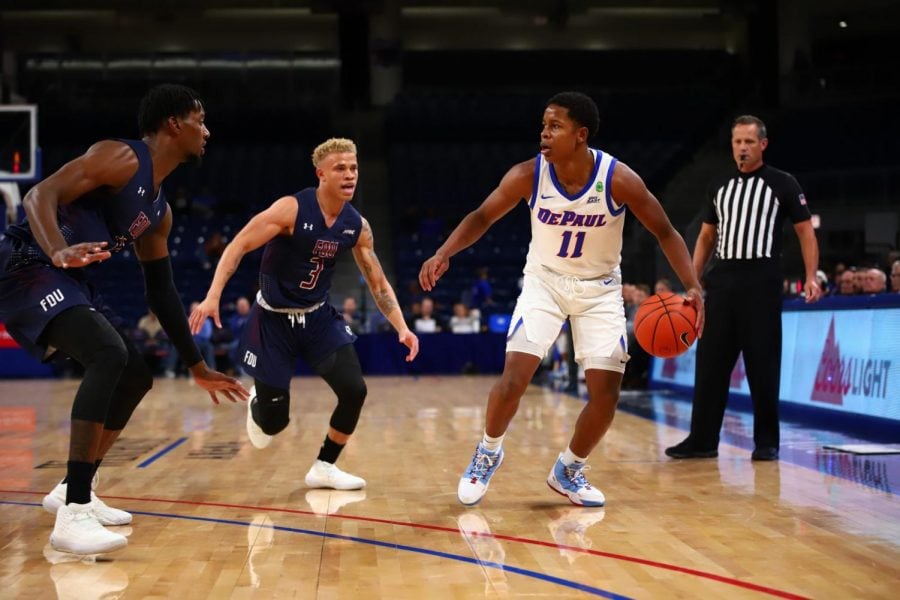 In DePaul’s first two games of the season they didn’t face much of a challenge from either Alcorn State or the University of Chicago, winning by an average of 23.5 points. But in game three of the season against Fairleigh Dickinson on Friday, the Blue Demons faced a much stiffer test — one that required a special performance from junior guard Charlie Moore.

After being down or tied for most of the game, the Blue Demons and Moore flipped a switch in the final 10 minutes of the game and escaped Wintrust Arena with a 70-59 victory.

For the first 30 minutes of the game, DePaul was getting outplayed on all facets of the game: worst field goal percentage, less rebounds, missing free-throws and looking lost on offense.

But while their offense was struggling to create good looks in the first half, the Blue Demons’ defense managed to keep the game close by forcing the Knights to take tough shots. In fact, in the final six minutes of the half, DePaul held the visitors to only eight points while they scored 16 points to take a 34-18 lead into the break.

“[Fairleigh Dickinson] is a really, really good team,” interim head coach Tim Anderson said. “They are very well coached. They went to the [NCAA] Tournament and won a game last year, so it’s so many facets that you got to try and get ready for. But our guys preserved on defense and got stops when it was needed.”

With the defense carrying much of the load in the entire first half and into the second half, it was on the offense to step up and do its part. Up until the 9:55 mark in the second half the offense had only scored 47 points in the game. But then Moore came to life and willed his team to victory.

In the final nine minutes of the game, Moore scored 13 points out of his game-high 27 points. But it wasn’t just about him getting the 13 points, it was more about how he got them. When he wanted to drive to the basket, he was getting there with ease — and when he felt like taking a 3-pointer, he was knocking them down also. There was nothing the visitors could do to stop him. At one point in the second half, Moore received the ball wide open behind the arc and the Knights’ head coach put his hands on his head in disbelief  —  thankfully for him and his team Moore missed the shot.

When Moore was going on his run in the second half, that was when the crowd was its most loudest and energized of the night. At one point the crowd began chanting, “We want Moore.” Friday’s game against Fairleigh Dickinson was the season’s largest turnout, in large part due to the student attendance being higher.

While Moore was the standout player for DePaul in their victory against Fairleigh Dickinson, the junior front-court duo of Jaylen Butz and Paul Reed once again commanded the paint for the Blue Demons. Reed got his second double-double of the season on Friday with 12 points and 11 rebounds, while Butz finished the game with 13 points and six rebounds.

With the victory over Fairleigh Dickinson, the Blue Demons improve to a country-best 3-0 record.

“That’s nice, but we got a whole season ahead of us, so we want to keep it for as long as we can,” Butz said. “So, it’s a great feeling, we are going to celebrate this win but we are going to get on this road and make it happen.

The Blue Demons’ next game will be their first road match of the season when they visit Iowa on Monday.