The term is not only tired, but detrimental to the news industry 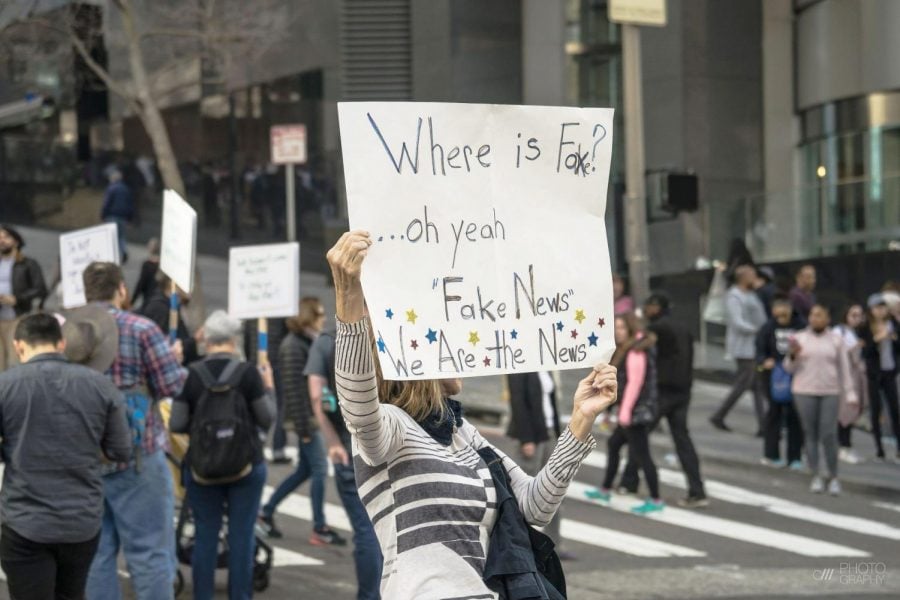 Since President Trump’s inauguration, the term “fake news” has dominated discussions about journalism.

It’s time for us to stop using the term fake news. We should eliminate the phrase altogether from our vocabulary because it’s lazy, problematic and does a disservice to hardworking journalists who are trying to provide truth, facts and transparency in today’s alternative facts society.

The term fake news is relatively new and became popular during the 2016 election, when President Donald Trump started using the term to discredit his political opponents, journalists, specific media and publications. Trump and his base will continue to use the term, but it’s important for the rest of us to stop using it because it only helps his rhetoric.

During a press conference alongside Finland President Sauli Niinisto in early October, Trump took credit for inventing the term fake news when he said, “I don’t even use fake anymore. I call the fake news now corrupt news because fake isn’t tough enough. And I’m the one that came up with the term, I’m very proud of it, but I think I’m going to switch it to corrupt news.”

In fact, BuzzFeed News media editor Craig Silverman was the person who popularized the term fake news before Trump decided to use it. Silverman first started using it in 2014 while he was running a research project at Columbia University’s Tow Center for Digital Journalism.

“It was going into the 2016 election cycle and it started popping up, people talking about these fake news story

showing up on social media and the internet and he [Trump] kind of just owned it,” said Craig Newman, a DePaul graduate student and former journalist for over 25 years at various publications including The Boston Globe and Chicago Sun-Times.

“He’s been a salesman for his whole life so he kind of gets that,” Newman said. “He picks up these little terms and kind of owns them and fake news he kind of quickly owned that and turned it around. Now it’s a description for media in general.”

For some aspiring journalists, the term fake news is a constant irritant.

“It’s annoying hearing it; it’s a cop out term and it’s a lazy way to try and discredit news organizations or reporters while providing no actual evidence that the story is fake,” said Chris Steiner, a journalism student at DePaul. “Just because a story is negative or critical of you doesn’t make it false.”

and helps keep the term afloat.

“While politicians on both sides of the spectrum have used the terminology of fake and real news, media organizations themselves are also perpetuating the use of these terms to combat negative percep

There will always be information out

there that isn’t factual, but instead of immediately labeling such information as fake news, we should try and differentiate if that information we are receiving is misinformation or disinformation.

An example of disinformation was when members of Congress revealed in May 2018 that more than 3,000 Facebook ads had been purchased by Russian agents during the 2016 election and that those ads were full of deliberate falsehoods designed to stir outrage.

“Do we really need to subscribe to The New York Times?” one county commissioner asked after a vote on the motion during a public meeting. The other commissioners laughed, video from the meeting shows.

“I actually was going to say that. I’m going to be a ‘no’ for this. Fake news. I agree with President Trump,” another commissioner, identified as Scott Carnahan by the Citrus County Chronicle, said. “I will not vote for this. I do not want The New York Times in this county.”

It’s important for media consumers to hear all sides and voices to get a full understanding of an issue and this kind of censorship only hurts the citizens in that county and helps spread the narrative of fake news. Someone’s personal political view should have no place in deciding what library resources are available for an entire county. Someone’s personal political belief that an entire media organization is fake news without any evidence should have no place in democracy.