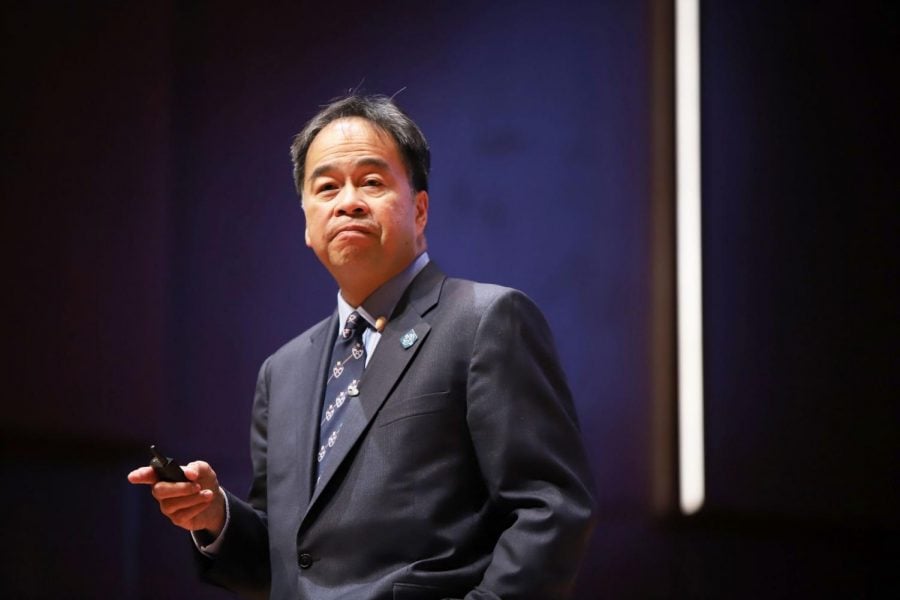 DePaul University President A. Gabriel Esteban delivers his 2019 State of the University speech.

At his “State of the University” address on Oct. 3, President A. Gabriel Esteban articulated a lofty goal for DePaul: break into the nation’s list of Top 50 universities in just 10 years. But in an interview with The DePaulia last week, Esteban walked back his statement, narrowing the scope of the university’s competition to urban campuses only.

Esteban said a number of the universities ranked highest by websites like U.S. News & World Report are not in urban locations, and that being in a city gives DePaul a “very distinct mission” which cannot be compared to those schools.

Focusing solely on urban universities eliminates much of DePaul’s competition. While DePaul is ranked by U.S. News & World Report as tied for the 125th spot, zeroing in on metropolitan areas bumps the school to the 72nd spot. By these standards, DePaul will need to raise its ranking by 22 spots as opposed to 75 spots to become a Top 50 university.

He pointed out that this goal is not his personal goal, but rather the goal of the administration as a whole.

Rankings are determined using several different categories: outcomes, faculty resources, expert opinion, financial resources, student excellence and alumni giving. In order to move up in its ranks, DePaul will need to improve in some categories and maintain its success in others.

“If we’re able to do that, then the graduation rate will go up,” he said. “This impacts ranking, whether or not you agree with the rankings.”

Getting prospective students interested in enrolling in the first place may be a challenge, due to a general decline in interest to attend college. This could be due to the “DIY” nature of the internet, where you can learn almost anything on YouTube, the rising amount of student loans or a smaller number of college-aged people.

Esteban said he thinks a college education is invaluable and that today’s higher education trends may be just that – trends.

“A whole lot goes on in intellectual, social and emotional maturation,” he continued. “It’s part of that college experience and is difficult to replicate — if not impossible— in an entirely online environment.”

DePaul’s Student Government Association (SGA) has a role to play in students’ affinity toward the university as well. Landon Campbell, a senior at DePaul and SGA’s Vice President, said many of this year and last year’s SGA initiatives on campus have been intended to strengthen students’ connection to DePaul.

“Once we have student engagement — which is what we’re working for — then we can make larger changes on campus,” Campbell said. “We have lots of different initiatives with the intent of fostering a stronger community for all students and making DePaul a great place for all students as well.”

Last year, the group registered the university as a “Tree Campus USA,” which recognizes DePaul as a campus that manages its trees and engages students in that process. This year, SGA approved an initiative which will bring free menstrual products to campus by January 2020.

The “student excellence” category is the portion of the ranking which most are familiar with — how high standardized tests are, the selectivity of admissions and incoming students’ high school class standings. Esteban said that in this category — particularly pertaining to the university’s admission rate, which has been between 69 and 72 percent in recent years — the university will not see much change.

“The average GPA of a DePaul freshman is 3.7, I believe, and that’s fairly high,” he said. “The academic profile of our freshmen this year and last year was also high. […] If the pool gets stronger every year and we maintain the same acceptance rate, then that’s great for us, right?”

Some argue that focusing on ranking might detract from the aspects of a DePaul education which make it unique.

While I would love for DePaul to be ranked higher nationally, I think the real value of DePaul comes from the practical experience one gains rather than the pure academics,” said Mara Reed, a junior at DePaul. “The hands-on experience, small class sizes and internship opportunities is what is more appealing rather than rigorous curriculum.”

Esteban said the decision to make these rankings a goal for the university is as important internally as it is for the school’s external reputation. Administrators intend to use the ranking as a metric to measure their internal goals, he said, and the ranking is a “natural consequence of achieving the milestones,” many of which are laid out in their “Grounded in Mission” plan.

He emphasized that it’s important that the university’s mission is not sacrificed for highly-ranked programs, whether that means keeping the acceptance rate high or remaining test optional.

“One thing we want to make sure is that we do it the right way, be it academics or anything else,” Esteban said. “People keep telling me we have to do it ‘the DePaul way.’”