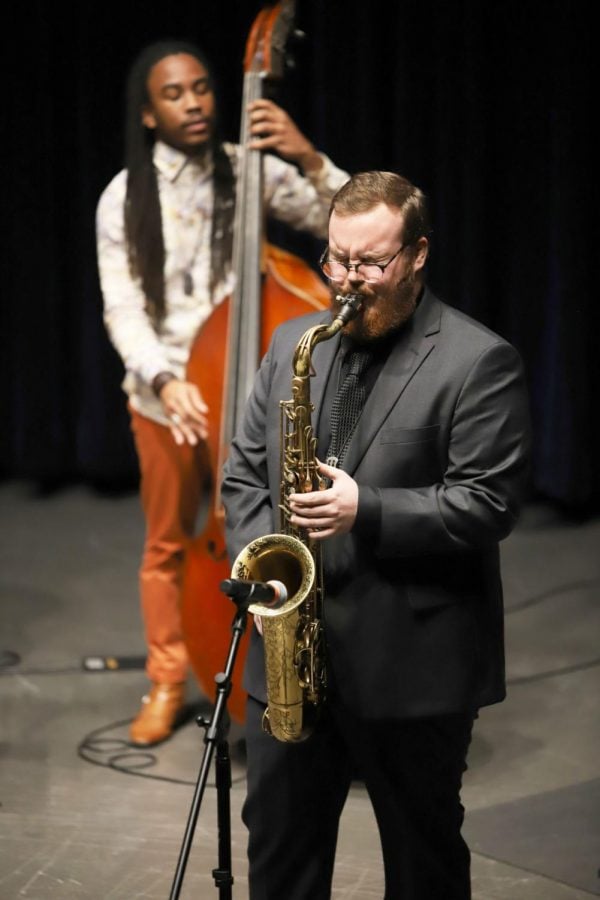 Jack Smith plays the tenor saxophone during a Jazz Performance on Wednesday.

Duke Ellington: If the first thing that comes to mind is “Big Mouth,” do yourself a favor and head over to a jazz club near you. Lucky for you, a new one opened just last year by the name of Holtschneider Performance Center.

Three different jazz combos at DePaul performed at the center last Tuesday. There were three different groups and each group had its own rehearsed songs prepared without a single sheet of music needed. According to Timothy Coffman, a jazz studies professor, the program includes around 60-70 total students, 13 combos and three ensembles.

The bright spotlights highlighted each performer and their instrument. The combos were basically teams, and it was a team effort for each member to keep each other in check to make the best collective sound. It was incredible to see so much talent on one stage, as well as how great combos would communicate while playing. A lot of older songs were performed, as well as solos, which were well received by the entire audience. Instruments included saxophone, vocals, piano, trombone, trumpet, bass and drums.

The first song I heard was Aretha Franklin’s “Impossible.” The song created a very soothing and powerful tone all at the same time. The vocalist, Gabrielle Henderson, sang the song and her likeness to Franklin was amazing. Jack Smith, a junior studying jazz studies, sounded like a better version of Duke Silver. The way he would play the tenor saxophone was breathtaking. His entire body shook as he finished hitting the last few notes before he finally betrayed himself by taking a breath.

“It’s just my passion,” Smith said. “I wake up and I wanna do it. It gives my life some meaning. If there’s any way that I could keep doing that, pursue that as a career, that’s what I’m going to try to do.”

Another performer that stood out was Dylan Barnett, a senior studying jazz studies. Being the only guitarist of the night, he physically and musically stood out to the audience. In their third song, “Chance,” Barnett shined with his solo. His golden hair matched the golden guitar he played and he riffed and strummed like he was in his own world. Bobbing his head and tapping his feet, with every high note Barnett slouched to get closer to his guitar each and every time. It was clear how much he practiced and how much he loved playing.

“It’s been pretty unbelievable,” Barnett said. “I take it for granted to be here every day because before I was here I was living in the suburbs and I really didn’t have any musicians that were at my caliber of likeability but also just as …serious as me, pursuing any sort of art form. And then I came here and immediately found a bunch of friends who are better or just as serious as I was about playing music…And now I make music every day. I record music. I play shows with my own bands and I’m playing music constantly at school.”

The last combo of the night was coached by Coffman. Each combo prepares for nine weeks, then decides between music and creates arrangements and then rehearses for the performance and the recording of the group’s set. It was evident to see through those nine weeks the chemistry built between the six all-male combos. There is a variety of songs and arrangements, including “Fog and Mist.” This arrangement by Will Barnard was a very peaceful and mystical emulation of rain, with an emphasis on the drums. At the end of all the performances, the audience cheered the loudest they had all night and it made sense because most of them were jazz students simply cheering each other on.

“I found that the community here is incredibly close-knit,” Smith said. “We treat each other as a family. We are really dedicated to seeing each other’s growth. Which is one of the primary reasons I’ve stayed here, and I think that this has been so beneficial for me.”

Another support system present in this program is with the faculty. Professors are able to give real-life examples and tips directly from their own experiences, according to Coffman.

“I directly relay experiences from gigs and performances and I’ll tell them if I had a weekend performance,” Coffman said. “What’s something that happened, that would apply to them directly and I’ll come in during their lesson during the week and tell them what happened. We’ll talk about it or work on the tune I played.”

“I’d say my private teacher has been the most influential in my development; his name is Bob Palmieri,” Barnett said. “He’s like kind of the model for what every good freelance artist should be because he does so many different activities and he doesn’t do only one thing like being a jazz musician. He designs his own pick-ups…guitar pickups. He produces records, he builds guitars, while also still being a fantastic musician and mentor. I think that’s really inspired me to really pursue the lifestyle of a freelance musician.”

“I feel like there’s a lot that can just be done, like you can procrastinate and you can hold off to the last second,” Barnett said. “And you can kind of get away with not actually making real intellectual growth…Whereas this is kind of like an ongoing process of your creativity and that’s not something you can really hide or pretend like you’re improving. While, yes, there’s all these classes and stuff, there’s still this expectation that you by yourself put in a lot of practice time to get better at your instrument. And no one’s really telling you to do that other than yourself. So I think the majority of the workload we have… has to come from personal motivation.”

Jazz combos and ensembles are performing all this week at the Holtschneider Performance Center.

“I mean definitely come out,” Smith said. “Come see some music if you’d like to. It’s free for anyone who’d like to come to it. As a player, it’s really great to have peers come out and engage with something that I’ve created.”