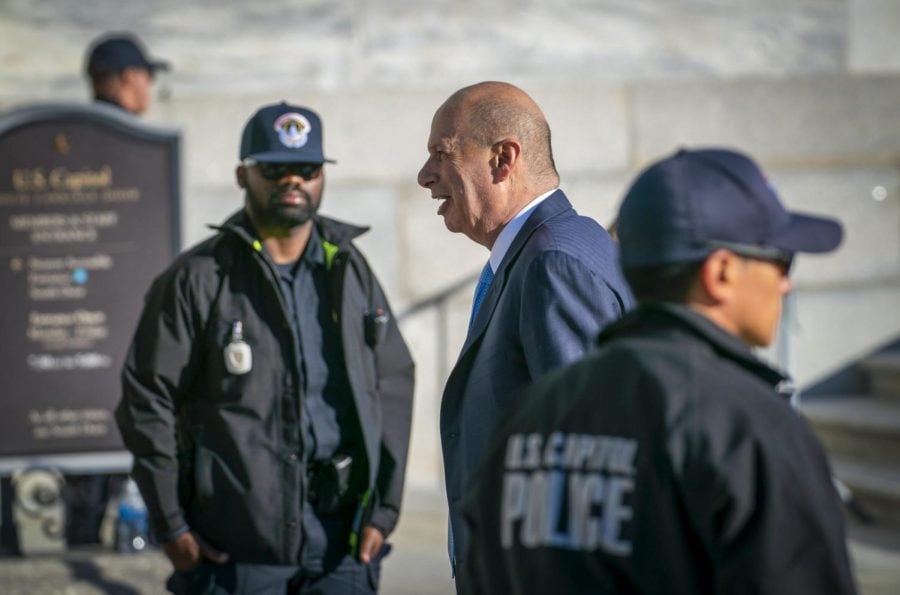 Gordon Sondland, the U.S. ambassador to the European Union, arrives at the Capitol in Washington, Monday, Oct. 28, 2019.

Mon, Nov. 4 — President Donald Trump declined the whistleblower’s offer to answer written questions from House Republicans, saying on Twitter the whistleblower must testify in person; a federal appeals court in New York said Trump’s tax returns can be turned over to state criminal investigators; several officials who were subpoenaed by House investigators did not appear, including top National Security Council lawyer John Eisenberg; House committees conducting the inquiry started to release transcripts from their investigations, including from Maria Yovanovitch, who said Ukrainian officials told her to “watch her back” from Rudy Giuliani and others who were out to get her; an attorney for Lev Parnas said he is willing to testify and provide documents as long as House investigators respect his fifth amendment right against self-incrimination; at a campaign rally at the University of Kentucky, Trump said the “Democrats’ outrageous conduct has created an angry majority” that will vote them out.

Tuesday, Nov. 5 — House committees released depositions from Ambassador to the European Union Gordon Sondland and former special envoy to Ukraine Kurt Volker; the transcripts revealed that Sondland revised his testimony, admitting he knew that the suspension of military aid to Ukraine was tied to Ukrainian officials publicly announcing a corruption investigation into the Democrats and presidential candidate Joe Biden and his son Hunter; committees leading the impeachment probe asked acting Chief of Staff Mick Mulvaney to appear on Friday, to which the White House responded Mulvaney would not; Senate Majority Leader Mitch McConnell said he didn’t believe an impeachment trial would lead to trump’s removal.

Wednesday, Nov. 6 — House Intelligence Committee Chairman Adam Schiff said public hearings will begin Wednesday with State Department official George Kent and top U.S. diplomat in Ukraine Bill Taylor; Taylor’s transcript was released, in which he said he his “clear understanding” was that “security assistance money would not come until the President [of Ukraine] committed to pursue the investigation” into the Democrats and Bidens; the trial of former Trump adviser Roger Stone began; David Hale, the Under Secretary of State for Political Affairs testified before House committees behind closed doors; Breitbart published the name of the whistleblower and was retweeted by Donald Trump Jr.

Friday, Nov. 8 — Ivanka Trump told the AP in Morocco that she thinks the impeachment inquiry is motivated by an attempt to overturn the results of the 2016 presidential election; she also drew attention to a 2017 tweet from the whistleblower’s lawyer Mark Said regarding the firing of then-acting Attorney General Sally Yates that the “the coup has started”; Mulvaney defied a subpoena and didn’t show up to testify before House committees; Trump said he might release an April call between him and Zelenskiy; he also said he had never heard of many of the people giving depositions to the house committees; transcripts from former chief Russia adviser Fiona Hill and top Ukraine expert on the National Security Council Lt. Col. Alexander Vindman were released; Vindman said Sondland told Ukrainian officials “there was no ambiguity” about Ukraine conducting an investigation into the Bidens; Vindman also said the transcript of the July call was edited to remove a reference to Burisma Holdings, an energy company with ties to Biden’s son Hunter, but he didn’t believe there was any “malicious intent” in the ommission; Facebook said it would delete the alleged name of the whistleblower, which was posted by numerous conservative media websites and blogs; Bolton’s attorney said the former national security adviser had information related to conversations about Ukraine that house investigators have not yet heard; Trump lawyers said they’ll appeal the New York tax returns decision to the Supreme Court.