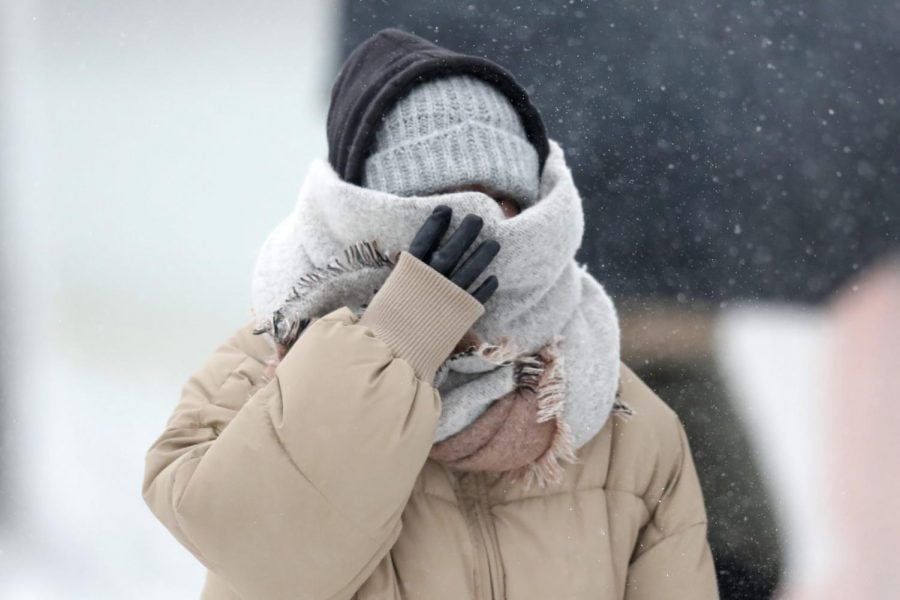 A woman walking the half mile from the Chicago Aquarium to the Adler Planetarium braces in a stiff wind and blowing snow off Lake Michigan, Monday, Nov. 11, 2019, in Chicago.

A storm that’s brought snow to the Midwest is about to give way to record-setting cold.

National Weather Service meteorologist Kevin Birk says that the arctic air mass will make the region feel a lot more like the middle of January than the middle of November. He says that by the time things warm up a bit on Wednesday, many communities could have new cold temperature records.

For example, Tuesday’s expected high of 21 degrees (-6 Celsius) for Chicago is a full seven degrees lower than the previous record.

Birk says the lows in Illinois, Wisconsin and Iowa could drop into the single digits or low teens.

The cold weather is preceded by a storm that is expected to bring as 6 inches (15 centimeters) of snow in Illinois and up to 10 inches (25 centimeters) in northwest Indiana and southwest Michigan.

The snow is taking its toll on air travel in Chicago as one plane trying to land at O’Hare International Airport slid off the runway.

The city’s aviation department says more than 440 flights in and out of the airport have been canceled.

None of the 38 passengers and three crew members aboard an Envoy Air flight from Greensboro, North Carolina, were hurt when the plane slid off the runway at about 7:45 a.m. Monday.

Besides the flights canceled at O’Hare, snow and ice have forced airlines to cancel more than 90 flights at Chicago’s Midway International Airport.

The National Weather Service expects as much as 6 inches (15 centimeters) of snow in Illinois and up to 10 inches (25 centimeters) in northwest Indiana and southwest Michigan.