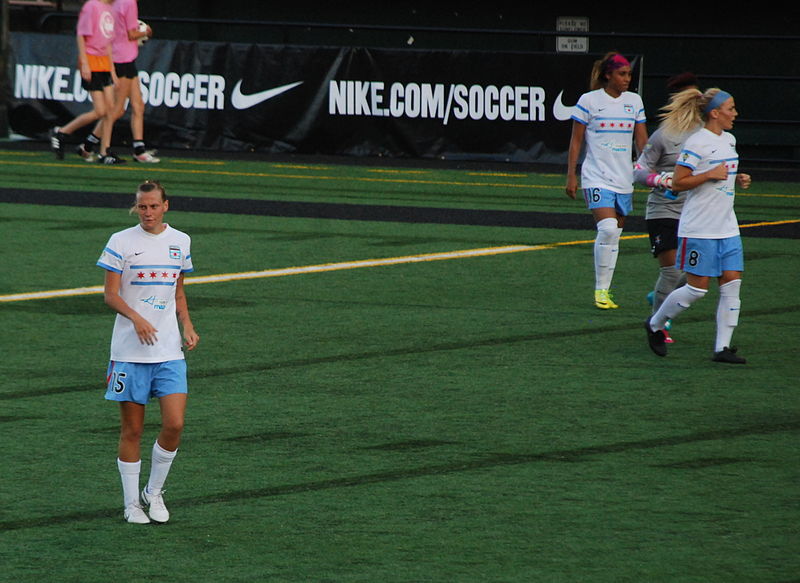 The Chicago Red Stars lost the National Women’s Soccer League championship 4-0 against the North Carolina Courage on Oct. 27, but the growth of women’s soccer this past season is apparent in Chicago and in the nation.

Women’s soccer in the U.S. has always been in the spotlight because of successes in national play, especially in the World Cup. After winning the World Cup back-to-back, Erin Chastain, head coach for women’s soccer at DePaul, said soccer culture for women is headed in the right direction.

“I think if you look at just this past World Cup and sold-out games and so many different countries competing at a really high level and so many young girls,” Chastain said. “Whether it’s the Chicago Fire games or Chicago Red Stars games, and selling out stadiums. Absolutely, I think we’re at a really great spot for women’s soccer right now.”

Not only is women’s soccer culture seen professionally, but also at the college level, including here at DePaul.

“Our team culture is incredible and I feel so close to every single person on this team,” junior forward Morgan Turner said. “So I think that definitely helps with how well we play on the field as well.”

Chastain said the sport will continue to grow even after generations of current players.

“I think our whole [goal] is that we give the young women in our program a wonderful opportunity to play college soccer and to grow into great people on and off the field,” Chastain said. “So, I think from a culture standpoint, they’ll leave here and they’ll have daughters that play soccer and we’ll see some growth that way.”

DePaul alumnus Maggie Dziubek has been the lead organizer for the official supporters group for the Chicago Red Stars since 2014. The group is called Chicago Local 134. The name pays homage to organized labor in Chicago and shares the history of the original fans’ seats when the Red Stars played in Toyota Park. The goal for the group is to support the Red Stars, build an atmosphere and energy around the team and create a community of supporters, according to Dziubek.

Dziubek has been able to see first-hand how much the team’s culture has changed from when she started to what it’s become today.

“That first year there were probably about six of us,” Dziubek said. “There are certainly more than six of us now. As far as official membership, we’re at about 130. The game last weekend, there were 9,000 people there and it felt like everyone there was picking up what we were laying down.”

Although the popularity of the women’s international side has grown due to recent successes, club soccer has not been able to receive enough recognition, according to Dziubek.

“A lot of women’s soccer history in the United States is what the U.S. women’s national team, who are obviously [a]huge player in the women’s soccer landscape globally and have brought a prominent sport here in the United States,” Dziubek said. “The history of club soccer is a bit fraught. Two [leagues], before this current league folded after only a few years of operation. And because the clubs weren’t viable long term, the only culture that was able to emerge was around the national team.”

Recently, league fans have continued to increase after the World Cup. This year, the league has broken multiple attendance records – teams like the Portland Thorns and Chicago Red Stars had upwards of 17,000 to 20,000 fans in attendance – even selling out stadiums.

More developments have been made in the NWSL. After the 2019 World Cup, Budweiser made a huge move and became the first beer sponsor of the NWSL. Also, this past week, Budweiser started a campaign called, “Help Budweiser bring more sponsors to the NWSL.” In their Twitter advertisements, Megan Rapinoe, captain of Reign FC, states, “The more support the league gets, the more the world will watch. The more the world watches, the closer we get to an equal playing field.”

The Chicago Red Stars has been one of the league’s best teams all season long. Their lineup consists of a wide range of diverse players from all over the world.

“This team is incredible,” Dziubek said. “Sam Kerr is an Australian player who is possibly the best attacking forward…Yūki Nagasato is a Japanese, former World Cup Champion, brings an incredible energy to the team. [They] have incredible chemistry. We also have the World Cup Champions from this year on the team: Julie Ertz, Morgan Brian, Tierna Davidson and [Alyssa Naeher].”

Former DePaul player Sarah Gorden, from the class of ’15, is also a part of this team.

“Super proud, I mean [Gorden] is playing really well,” Chastain said. “She’s playing at outside back, starting and really doing an awesome job for her team. So, I’m super proud that she was in our program and proud that she had a wonderful career for us and she’s able to continue in the game now being four years out from DePaul.”

Although women’s soccer has begun to reach new heights, there is still a lot more potential, according to Turner.

“I think that there is still a lot of work to be done in equal pay and media coverage for women’s sports,” Turner said. “But I definitely think that the World Cup this summer was a step in the right direction and I think that people are starting to value it a lot more.”

Dziubek added that more things can be done for women’s sports organizations in general.

“The No. 1 thing I’d like to see is a stable, driving NWSL,” Dziubek said. “More teams in the league to support a larger group of players. There’s a lot of talent out there but only [nine teams]. They’re adding a team next year and a team the following year…More consistent community support in the form of going to games and buying season tickets. Specifically, in the city of Chicago, I would like to see the Chicago Red Stars and the Chicago Sky just become more integrated into the city’s identity.”