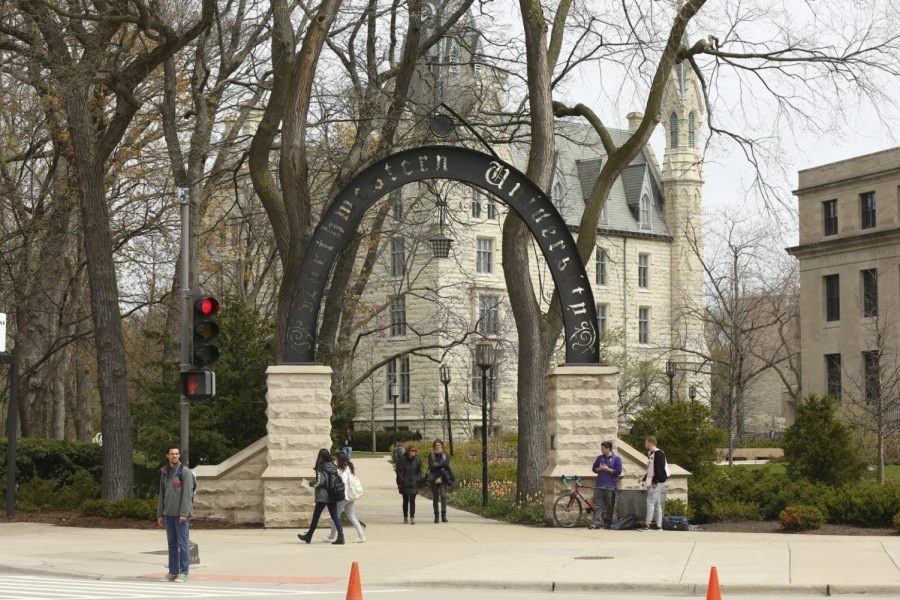 In this Friday, April 29, 2016, photo, people stand near the entrance gate to Northwestern University in Evanston, Ill. Northwestern University's student newspaper is under fire. Their first critics came from within the campus as student activists questioned journalists’ coverage of protests. Within days, editors decided to write a statement apologizing but their editorial prompted a second round of criticism from journalists around the country starting Monday, Nov. 11, 2019.

Student editors at the newspaper covering Northwestern University have faced two waves of criticism over their coverage of protests in response to an event featuring former Attorney General Jeff Sessions.

First, student activists criticized them for publishing photos of protesters on the suburban Chicago campus. Within days, editors at The Daily Northwestern decided to apologize, but their editorial prompted a second round of criticism from journalists around the country who said they shouldn’t feel any guilt about using basic reporting strategies.

In the editorial, posted online Sunday and printed Monday, editors said they shouldn’t have tweeted photos of student protesters being blocked by campus police as they tried to get inside the Sessions event last week.

The photos were later deleted. Editors said they didn’t want students to be at risk of punishment by the school or online harassment.

The eight editors who signed the editorial also acknowledged removing a protester’s name from a story about the event at the person’s request, and said they were sorry for using a student directory to text people who protested at the event and ask them for interviews.

“While our goal is to document history and spread information, nothing is more important than ensuring that our fellow students feel safe — and in situations like this, that they are benefiting from our coverage rather than being actively harmed by it,” the statement read. “We failed to do that last week, and we could not be more sorry.”

Professional journalists criticized the students’ take as wrongheaded, inexperienced and an ominous sign for the profession’s future. Others suggested that the students were right to consider the effects of interviewing and photographing protesters but communicated that goal poorly.

By early this week, the student leaders were reeling but the paper’s chief editor said he and the other journalists understand their right to cover protests but want to work “with empathy.” He said they don’t plan to take back the broad message they aimed toward classmates at Northwestern, particularly non-white students who remain in the minority on the Evanston, Illinois, campus north of Chicago.

“There’s a lot of students and student activists who feel we show up into spaces and don’t care about who’s there, don’t care about the student body that we’re part of, but rather we’re just there to extract a story and never talk to them again,” Daily Northwestern Editor-in-Chief Troy Closson told The Associated Press on Tuesday. “That’s the history and reputation we have.”

Closson, a 21-year-old senior at Northwestern, is only the third black student to lead the paper since its founding in 1881. Closson said he was the only black staff member when he joined the paper as a freshman, and he found the paper lacked stories on students “who looked like me or had experiences like me.”

He and other editors leading the paper in recent years were determined to change that, including the creation of a team focused on building diversity in the paper’s coverage, Closson said.

According to the National Center for Education Statistics, Northwestern’s enrolled undergraduates in the fall of 2018 were 45% white, 17% Asian, 12% Hispanic and 6% black. This year’s freshman class is 54% white, 12.6% Hispanic/Latino and 10.2% black, according to Northwestern’s admissions office.

The Daily Northwestern operates independently from the university and its journalism school. Like other student journalists, they make delicate decisions about how to cover their community and peers and how to handle complaints about coverage.

In October, student activists demanded an apology from The Harvard Crimson after the newspaper reached out to a federal immigration agency for a story on a campus protest. The newspaper said it stood by its decision to seek comment from the U.S. Customs and Immigration Enforcement after the protest, which called for the abolition of the agency.

Kenna Griffin, president of the College Media Association and a journalism professor, said she would have advised the Northwestern students to put out a statement explaining how they produce articles and other material, rather than apologizing.

“We have an administration (in the White House) right now who feels that anytime they don’t like something reported, they can label it untrue or fake,” Griffin said. “This idea is being adopted by the public. So there’s definitely a need for journalists at every level to explain how the information is gathered and the decisions they make.”

Criticism of coverage at the Nov. 5 campus event began almost immediately on Twitter in response to photographer Colin Boyle’s images of protesters being blocked from entering the room where Sessions spoke. Messages still visible on Twitter blasted him for shooting photos showing protesters’ faces, suggesting it could expose students to harassment.

Boyle, 21, said he finished photographing Sessions’ remarks and attendees leaving the event before checking his Twitter account, where he saw criticism of the images he had posted. Boyle said he was shaken and that he headed for the newsroom, where he decided to delete the photos and post a statement apologizing “for adding any additional trauma,” with input from editors.

“It’s caused me to think a lot about what my impact is as a visual storyteller and the power and privilege this job holds,” Boyle told the AP on Tuesday.

By Sunday, Closson said he and other editors felt they owed readers a fuller explanation of their decisions about covering Sessions and the protests. He didn’t anticipate many people outside the campus community would read it.

Charles Whitaker, dean of the university’s Medill School of Journalism, called the editorial “heartfelt though not well-considered” in a lengthy statement Monday. He suggested it was in reaction to “relentless public shaming” by student activists in the wake of the newspaper’s coverage of Sessions’ speech and the protests.

“I think it is a testament to their sensitivity and sense of community responsibility that they convinced themselves that an apology would affect a measure of community healing,” Whitaker wrote. “I might offer, however, that their well-intentioned gesture sends a chilling message about journalism and its role in society. It suggests that we are not independent authors of the community narrative, but are prone to bowing to the loudest and most influential voices in our orbit.”

Whitaker also defended the students against criticism from professional journalists that flamed across Twitter starting Monday.

“You are not living with them through this firestorm, facing the brutal onslaught of venom and hostility that has been directed their way on weaponized social media,” he wrote.

Several journalists chimed in with similar messages this week. Marlon A. Walker, an education reporter with The Atlanta Journal-Constitution and a vice president of the National Association of Black Journalists, said he thinks having more support from working journalists would help the students at Northwestern and other college media outlets grow from experiences such as this.

“The last few years have made it harder for us as journalists to do our job,” he told the AP. “That’s amplified when you’re a student journalist learning on the fly.”