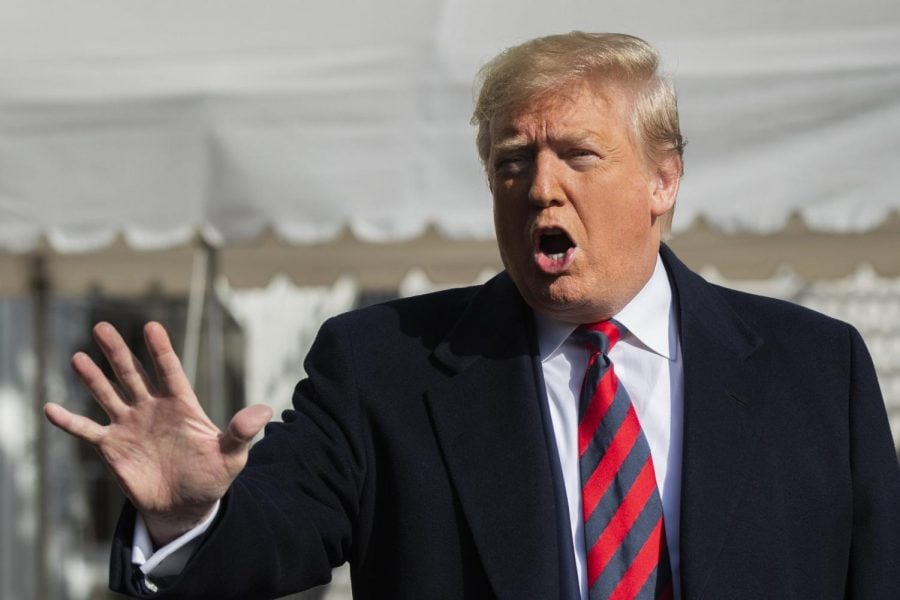 President Donald Trump talks to the media before leaving the White House, Saturday, Nov. 9, 2019, in Washington. Trump is attending the NCAA college football game between Louisiana State University and Alabama in Tuscaloosa, Ala.

WASHINGTON (AP) — President Donald Trump on Friday released the summary transcript of his April congratulatory call with Ukraine’s president-elect, the latest salvo in the White House effort to blunt Democratic allegations that Trump abused his power by pressuring a foreign leader to get involved in U.S. politics.

The new account of Trump’s call with Volodymyr Zelenskiy differs significantly from the initial summary of the conversation that the White House released in April. While the first readout of the call said Trump had expressed his commitment to help Ukraine “root out corruption,” there is no mention of corruption in the rough transcript released on Friday.

The release of the April call came as the House held a second day of public impeachment hearings with U.S. diplomats who have raised concerns that Trump may have misused his presidential powers by withholding military aid to Ukraine as he called on Zelenskiy to investigate former Vice President Joe Biden, a top political rival.

The 16-minute call, placed from Air Force One at Trump flew back to Washington after a weekend in Florida, is filled with flattery for Trump from Zelenskiy, and invitations from the new Ukrainian leader for Trump to visit Kiev. There is no reference to Biden or his son, or to Trump’s interest in having the Eastern European leader launch an investigation into the Bidens.

National security officials who listened to the call had said in advance that this first conversation between Trump and Zelenskiy was not considered problematic. The House impeachment inquiry was spurred by Trump’s second conversation with Zelenskiy, on July 25, in which the U.S. president urged Zelenskiy to look into the Bidens and Democrats in the 2016 election.

According to the White House account of the April call, Zelenskiy told Trump: “You are, as I said, a great example. We are hoping we can expand on our job as you did. You will always, also, be a great example for so many.” Pressing Trump to visit Ukraine, Zelenskiy added: “I know how busy you are but if it’s possible for you to come to the inauguration ceremony, that would be a great, great thing for you to do to be with us on that day.”

Trump in recent days has attempted to shift the spotlight from his July conversation with Zelenskiy to the April call, in in which he spoke to Zelenskiy soon after he won a landslide victory over Ukraine’s then-President Petro Poroshenko.

Referring to the April call, he urged reporters to read the transcript and “tell me if there’s anything wrong with it.” The rough transcript as released minutes before former U.S. Ambassador to Ukraine Marie Yovanovitch began her testimony before impeachment investigators on Capitol Hill. The top Republican on the panel, Rep. Devin Nunes, read the rough transcript aloud into the congressional record.

“The President took the unprecedented steps to declassify and release the transcripts of both of his phone calls” with Zelenskiy “so that every American can see he did nothing wrong,” said White House press secretary Stephanie Grisham.

In that first call, Zelenskiy, taking power against the backdrop of Russian menace, urgently tried to build a relationship with Trump, extolling Ukraine’s food and people while repeatedly asking the president to come visit. Trump demurred but pledged that a high-level delegation would attend Zelenskiy’s inauguration.

Vice President Mike Pence was slated to attend the Kyiv ceremony but his trip was canceled. In the end, Energy Secretary Rick Perry led the delegation.

Lt. Col. Alexander Vindman, an Army officer assigned to the National Security Council, said during a closed-door deposition last month that the two calls between the president were starkly different in tone.

“What I could say is the tone in the call on the 21st of April was very positive, in my assessment,” Vindman said. “The call, the tone of the call on July 25th was not. It was…I’m struggling for the words, but it was not a positive call. It was dour. If I think about it some more, I could probably come up with some other adjectives, but it was just — the difference between the calls was apparent.”

Fiona Hill, the former top Russia policy specialist at the National Security Council, in her deposition described the April exchange between the two presidents was a “short congratulatory call.”

The first call was marked as unclassified, for official use only. The second call was classified as Secret/Originator Controlled/No Foreign Nationals and was placed on a highly classified National Security Council server.

The rough transcript released Friday appeared to show some warmth between the two leaders with Trump extending congratulations on the electoral victory.

Democrats have said that Trump withheld military aid and the possibility of a White House visit, a clear symbol of alliance between the two governments, unless Zelenskiy investigated the Bidens. Trump, in the April call, did offer a visit to Washington.

“When you’re settled in and ready, I’d like to invite you to the White House,” he said. “We’ll have a lot of things to talk about, but we’re with you all the way.”

Zelenskiy has yet to visit Washington, though the two men met in September in New York on the sidelines of the U.N. General Assembly. In the April call, the Ukrainian leader vowed to practice his English for their eventual meeting — Trump responded with a laugh, “I could not do that in your language!” — and repeatedly extolled his country and asked Trump to come visit, even if not for the inauguration.

“Well, I agree with you about your country, and I look forward to it,” Trump said. “When I owned Miss Universe, they always had great people.”