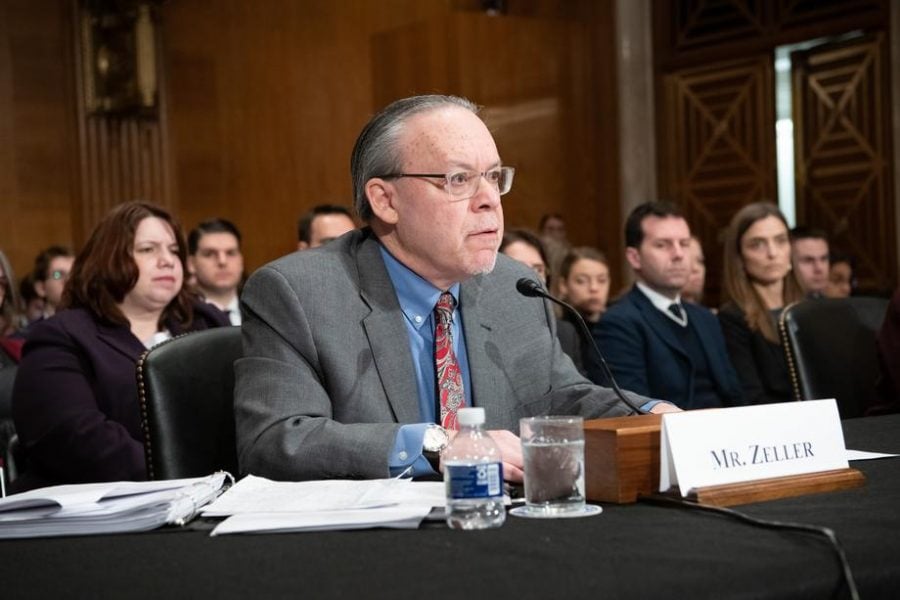 Courtesy of U.S. Senate Committee on Health, Labor and Pensions

Lawmakers on Wednesday heard from a top FDA official that there was no timeline set for a proposed ban on non-tobacco flavored vaping products. The comments came at a hearing for the Senate Committee on Health, Education, Labor and Pensions.

The plan to remove all non-tobacco flavored vaping products from the U.S. market was announced in September.

“This would include mint and menthol flavoring, as well as candy flavors, bubblegum flavor, fruit flavor, alcohol flavor,” Health and Human Services Secretary Alex Azar said Sept. 11. “You get the drift.”

But, two months later, Mitch Zeller, director of the Food and Drug Association’s Center for Tobacco Products, said there was still no set timeline on this new policy, showing potential hesitation and reconsideration from Donald Trump’s administration and the FDA.

This delay falls suit to many previous ones made by the FDA. According to Emily Nink, a policy associate at the Public Health and Tobacco Policy Center, the FDA has a history of delaying regulations on the tobacco industry. Nink was not a participant in the hearing Wednesday.

She said it can be traced at least to 2009, when the Family Smoking Prevention and Tobacco Control Act was passed. The act gave the FDA the power to regulate tobacco products and, later on, e-cigarettes. But Nink said the FDA has yet to implement procedures for pre-market review, which requires manufacturers to submit an application before they can put their products on the market.

“So that’s kind of why we’re in the situation we are in now with these acute illnesses and [increasing] rates among youth,” she said.

Another key topic at Wednesday’s hearing was the general rise of e-cigarette use among youth. Zeller cited recent research from the FDA and CDC, saying that 27.5 percent of high school students and 10.5 percent of middle schoolers use e-cigarettes. The same survey found that more than five million middle and high school students are current e-cigarette users. That’s a 700 percent increase in teenage vaping since 2013.

Some of the reasons for this increase are related to how e-cigarettes are marketed, according to Nink.

“A key factor behind that is the interest in the product,” Nink said. “So, the marketing that’s been appealing to youth, the use of these kid-friendly flavors in the products and the fact that they’re cheaply available and widely available.

Also, the design of the products themselves, especially the cartridge products, are really appealing: They’re discrete, easy to use, even in school they’re easy to hide. All those types of factors make the products much more appealing to teenagers.”

A lack of effective regulations has also created a pathway for young people to be exposed to nicotine while their brains are still developing.

“If vaping products include nicotine, then particularly for youth, we’re really concerned because adolescent and even young adults are still developing their brains,” said Anne Saw, a psychology professor who studies tobacco prevention efforts.“Nicotine can really harm brain development all the way up to [a person’s] mid-20s.”

On Tuesday, doctors at Henry Ford Hospital in Detroit announced that a teenager received a double lung transplant for the first time due to a vaping-related lung disease. At a telephone briefing with reporters Nov. 8, the CDC said it was “closer to finding a very strong culprit” after finding Vitamin E acetate in every lung fluid sample it examined since late October from patients across the country with vaping-related lung illnesses. The vitamin is used in a variety of products and foods, but can cause injury when inhaled, the CDC said.

As of Nov. 13, the outbreak of e-cigarette and vaping-related lung injuries had affected over 2,000 Americans and killed 42 people.

Nink, of the Public Health and Tobacco Policy Center, said not enough is known about vaping and e-cigarette products.

“These products are newer, we haven’t had enough research, we don’t have long term health data and, most importantly, we don’t have that [regulation] in place by FDA where they’re reviewing product ingredients or testing them before they go to market,” she said. “Instead we’re seeing that youth are really guinea pigs for these newer products.”