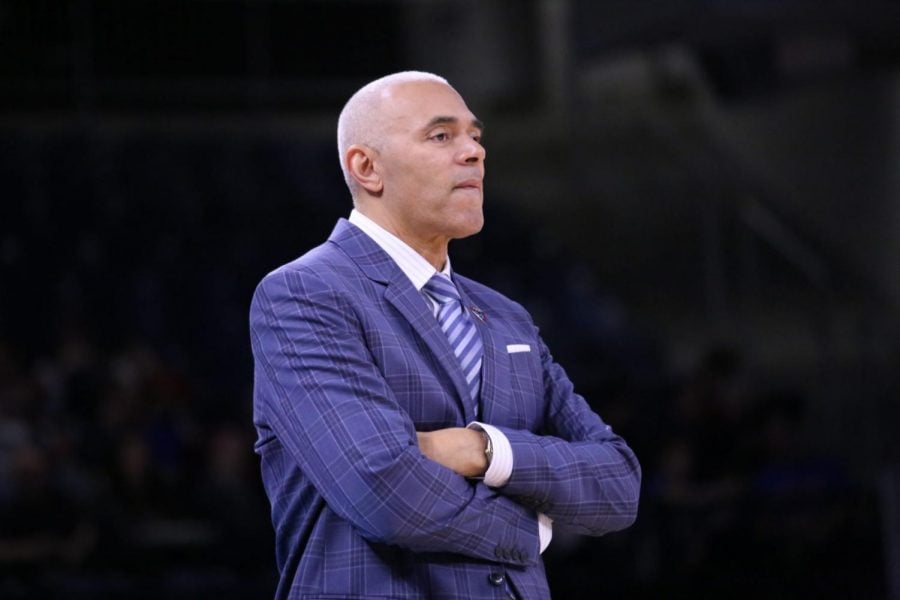 DePaul head coach Dave Leitao looks on during the Blue Demons' game against Cornell on Nov. 16 at Wintrust Arena.

DePaul has gotten another commitment from a legit Chicago prospect.

Class of 2021 four-star recruit Ahamad Bynum of Simeon Career Academy has verbally committed to the Blue Demons, joining current freshman Markese Jacobs to make it the second year in a row that DePaul has landed a four-star recruit from within city limits.

Bynum is the nephew of former NBA player Will Bynum. The junior has committed before his junior season has even begun after a visit to Lincoln Park this weekend. Bynum also received offers from Illinois, Northern Illinois, Missouri and Nebraska.

The 6’1” guard battled through an injury last season but is known as a crafty scorer and ball-handler. Bynum is currently ranked 88th in the country for the class of 2021. Bynum plays for the Mac Irvin Fire AAU team.

Assistant coach Tim Anderson handles a bulk of recruiting for the Blue Demons, and with ties to the Chicagoland area, his reach has been key in landing potential star recruits. Currently, three players for DePaul went to Chicago schools. Junior guard Charlie Moore (Morgan Park), Jacobs (Uplift) and junior guard Devin Gage (Curie), all have contributed to the best start for the school since 1986-87.

Staying close to home was key for Bynum. The recruit, in an interview with the Chicago Sun-Times, expressed his affinity with the school. “I’m cool with coach [Dave] Leitao and [assistant] Tim [Anderson],” Bynum said. “Tim is like family. And the chance to play in front of family and friends was important. I want them to be close and be able to watch me play.”

Bynum had a visit to Illinois in October but chose DePaul over any school to give him an offer.

When it comes to Chicago representation, DePaul is on the upswing.

“I love watching those guys,” Bynum said of Jacobs, Moore, and Gage. “I want to represent the city of Chicago and help bring DePaul basketball back.”